In this guide we’ll take a look at the best ratchet secateurs.
We’ve compared design, ease of use, durability and cost
to give you our top recommendations.

What Are The UK's Best Ratchet Secateurs?

The Gardener’s Friend Ratchet Secateurs are the best secateurs on the market – designed for pain-free pruning and especially useful for those with arthritis or mobility problems. They use a highly effective ratchet mechanism that utilises leverage for minimal effort cutting and pruning.

These secateurs are developed by professional gardeners which make them a seriously reliable choice. They make cutting branches up to 1” thick quick and easy, perfect for giving your garden a spruce up. The blades are replaceable and easy to clean.

Finally, these secateurs have a soft rubber grip handle to absorb pressure and keep you comfortable while you work.

The Wilkinson Sword Anvil Secateurs have a high quality design, made from strong and durable nylon fibre. With a 3 step ratchet mechanism, these secateurs make cutting thick branches of up to 22mm much easier – so you can prune thick growth and remove branches quickly.

With a central catch, these secateurs can be used by both left and right handers. They have a comfortable handle and a quality SK5 non stick coated blade.

Lightweight and easy to use, these secateurs feel sturdy in your hand and slot nicely in your pocket. Despite the lightweight design, these are rock solid and long lasting.

The Spear & Jackson Kew Gardens Secateurs boast an ergonomic, comfortable design that allows you to cut through branches with a fraction of the effort that would be needed with standard pruners.

These secateurs have excellent quality blades and come with a blade sharpener included. They’re part of the ever-reliable Kew Gardens collection so fantastic quality, while the 10 year guarantee is there for added reassurance.

Finally, these secateurs are easy for both left and right handed users. They are very lightweight and cut easily through overgrown branches.

Amateur gardeners or those new to the challenge should look no further than the EasyKut Ratchet Secateurs. Designed specifically for ease of use, these can cut up to 20mm thick branches with little effort needed by the user – just 3 small squeezes.

These secateurs have a safety lock and large knuckle guard for safe and comfortable operation. The non stick coated blade reduces friction which makes them easier to use, while the ergonomic soft grip handle reduces hand pain.

These come in a bright orange colour which makes them easy to spot if left in the garden.

The Davaon Pro Ratchet Secateurs are some of the best ratchet secateurs on the market. With 5 times the cutting power of using just your hands, these make light work of tough jobs. Cut even thick branches using gentle pressure increasing steps which won’t hurt your hand.

These 2 in 1 ratchet secateurs can be changed from ratchet to single cut mode using one unique switch. This lets you cut thin branches more efficiently using the simply quick cut mode.

With high quality hardened steel blades and an ergonomic design, these secateurs are both long lasting and comfortable. They can be used with minimal strain to the user and come with a 100% satisfaction guarantee.

How to Choose The Best Ratchet Secateurs

Secateurs are an indispensible gardening tool when it comes to neatening up your garden. While petrol or electric powered machines are great for those tougher areas, for small areas that just need a little tidying, you can’t go wrong with a pair of secateurs.

Secateurs are simple, affordable and lightweight tools that can be used by anyone – even inexperienced gardeners. Whether you’re keeping on top of pruning or harvesting some crops, secateurs are a great tool for a range of jobs.

What are Ratchet Secateurs?

Ratchet secateurs are a specific type of secateurs. The ratchet part refers to the mechanism the secateurs used to cut the branch or twig.

A ratchet mechanism causes the secateurs to cut in several different stages, without the users needing to use a lot of physical strength. Secateurs without this mechanism can be tiring to use, causing strain on your wrists and fingers.

The Benefits of Using Ratchet Secateurs

As already mentioned, using ratchet secateurs can help to reduce fatigue on your forearms and fingers. But secateurs in general have a range of benefits.

There’s two distinct types of secateurs; bypass and anvil. This refers to the cutting action, and for ease of use, it’s important that you have the right tool for the job.

Bypass secateurs work in the same way as a pair of scissors. The two sharp blades bypass each other, producing a clean and accurate cut. These secateurs are versatile and very easy to use.

Bypass secateurs are also useful because they can be used to cut near to the bud with no risk of damaging the stem. This is because the cut is automatically very clean, so damage is minimal.

Anvil secateurs work slightly differently. The cutting mechanism for these is more like a knife on a chopping board. The blade is pushed down to meet a flat base.

The benefit of these secateurs is that they tend to have more power than bypass secateurs. They also require less force, so are suitable for thicker branches and dead wood.

The downside of anvil secateurs is that the cut isn’t nearly as clean as it is with bypass models. Live tissues and stems can get damaged.

The sharper the blade, the stronger the cut, and the less force you’ll need to exert. While ratchet secateurs generally minimise the amount of force you need to use anyway, a sharp and good quality blade will also help.

Cutting with a blade that’s blunt can also damage your plants, leading to infection and insect damage. To keep your secateurs working properly, you should regularly clean and sharpen the blades.

I recommend opting for a blade made from quality, hardened steel. Many blades are also coated with non-stick which makes them easier to clean after use.

The blade quality as well as the size of the secateurs will also influence the size of branches you can cut. I’ve recommended a range of secateurs, with some able to cut branches up to 25mm thick

As with all garden tools, the handle is well worth paying attention to. While a ratchet mechanism should naturally make the secateurs more comfortable to use, you may struggle with longer tasks if the handle isn’t comfortable. Look for soft grips and an ergonomic design.

How to Maintain your Secateurs

If you are pruning diseased plants, I recommend keeping a container of disinfectant handy. It’s good practice to dip the blades in the disinfectant between plants, rubbing them dry before using again.

There’s a few safety features worth looking out for when you’re shopping for secateurs, although these aren’t essential.

A set of brightly coloured secateurs will be easier to find if you drop them in long grass or bushes. Ideally, you want to be able to spot them quickly, before your investigative pet gets to them!

Another good safety feature is a safety catch which keeps the blades closed when not in use. This will make them safer to use and store.

Do secateurs come in different sizes?

Secateurs are available in a range of sizes. If you have smaller hands than average, opt for a pair with a shorter handle length. The length of the handles is more important than the size of the blades when it comes to comfort. If you’ve got large hands, opt for secateurs with longer handles.

What is the difference between pruners and secateurs? 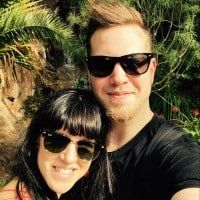 Clive Harris is the creator of DIY Garden. He loves his garden and spends many happy hours outside each week growing, mowing, pruning and playing with his kids.