Bosch’s UniversalChain 18V Cordless Chainsaw has been specifically created to be easy and non-intimidating for people who don’t have much experience using a chainsaw. I’ve tested out several Bosch products over the past few months, from their electric garden shredders and scarifier to their cordless strimmer and leaf blower, and I’m usually pretty impressed with how they perform.

After Storm Arwen had left me with several fallen trees to deal with, I was looking for a chainsaw that I could use to quickly slice up those trunks and branches. The Bosch UniversalChain 18V Cordless Chainsaw wasn’t quite designed for such a heavy-duty task. Instead, it was made primarily for tree pruning and firewood cutting, so I was curious to find out if it would be able to do what I needed it to.

Our Verdict of The Bosch UniversalChain 18V Cordless Chainsaw

This Bosch UniversalChain Cordless Chainsaw is absolutely ideal for people who have never used a chainsaw before. Granted, it may not be able to cope with thick wood, but it’s so lightweight, compact, and simple to use. It really is the perfect starter chainsaw for anyone looking for a faster and easier way to prune their garden trees. 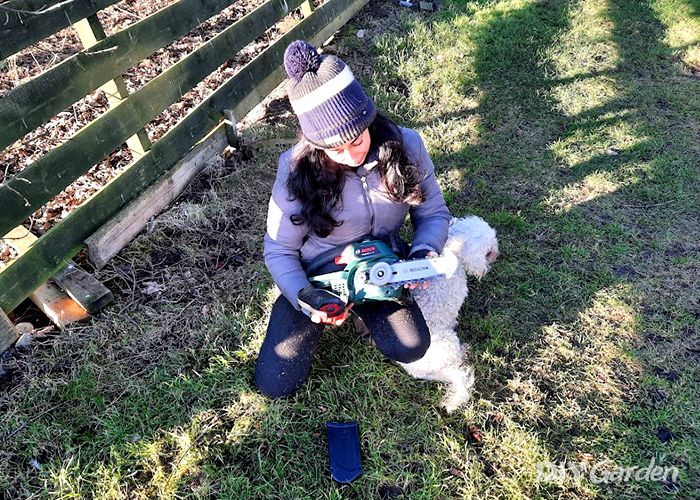 Bosch always tries to make assembly as easy as possible with their garden and power tools, and they’ve done the same with this chainsaw.

Remove it from the box and you’ll notice that the chain is already attached to the bar, which immediately saves you a good few minutes. All you need to do to put this chainsaw together is unscrew the plastic cap to remove the side panel/cover, and then attach the bar and chain to the main unit. You’ll then need to attach the chain to the back cog, but since this chain has a fair amount of give, this is pretty straightforward.

Once you’ve tightened everything, you can put the cover back on before filling it with oil, which Bosch has kindly supplied with the machine. All in all, assembly only took about five minutes, and was made even easier by the fact that no tools were required to put this chainsaw together. 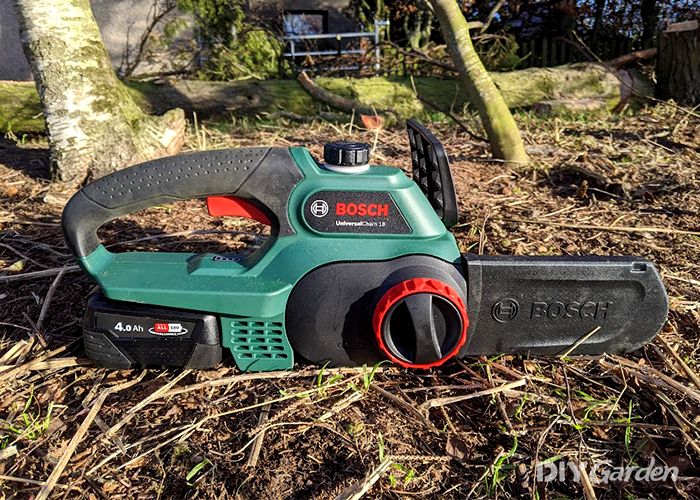 In terms of appearances, this is clearly a Bosch product. Their branding is very distinctive and definitely gives the machine a high-quality feel.

In total, I tested out six cordless chainsaws, and the Bosch was significantly smaller than the rest. Although its bar is 20cm long, Bosch states that the chainsaw has been designed to tackle a diameter of just 13.5cm. This is because there’s a protective guard at the tip of the chainsaw. It’s the first time that I have seen a chainsaw like that and it means that you can’t use the tip of the chainsaw to help you when cutting.

Why has Bosch included this guard? For a couple of reasons. Firstly, using the nose of a chainsaw to cut wood requires experience and a certain amount of know-how. Since this chainsaw was designed for beginners, Bosch has tried to prevent accidents by blocking the tip off. The tip protector also supposedly reduces vibration and gives you a cleaner cut when pruning trees, which allows healthy new wood to grow back faster. That said, it’s a shame that Bosch didn’t design the tip guard to be removable, as this would have made the machine so much more versatile.

In terms of other design features, this chainsaw boasts soft, ergonomic handles and a large trigger. It has also been designed to take one 18V Bosch battery. It’s also worth noting that this chainsaw has been equipped with an Oregon chain, which is one of the best quality chains out there. 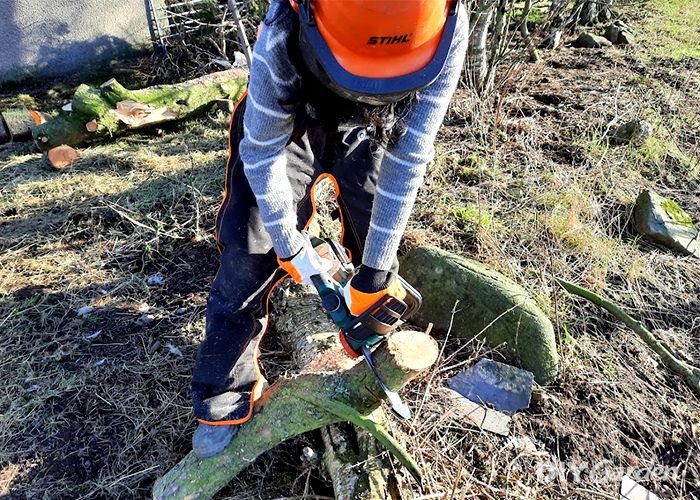 Just like all of the other cordless chainsaws I reviewed, this one started up quickly and easily. I could clearly see right from the start that this chainsaw wasn’t big enough to handle tree trunks, so I tested it out on a variety of fallen branches instead.

It was able to zip through smaller branches with ease, but did require additional pressure for thicker limbs (roughly anything over 10cm in diameter), which you shouldn’t really need to do with a chainsaw. Ideally, you should be able to just hold a chainsaw in place and let it do its thing, but this one needed a little more persuasion.

While I do understand why Bosch added a guard to the tip of this chainsaw, it did start to get a little frustrating after a while as it really limited how this chainsaw could be used. A closer look at things showed that the tip guard could potentially be removed with the right tools, but this is something that the instruction manual advises against doing. It would probably also void your warranty.

Since tree pruning was one of the main tasks that this chainsaw was designed for, I wanted to see how it actually performed at doing this. It wasn’t the right time of year to prune the trees that actually needed pruning, but I gave things a go by cutting a few branches off from one of my sycamore trees and removing a thin, twisted trunk from one of my other trees. It managed this without any problems – the protective tip guard actually provides a bit of extra leverage. However, again, you wouldn’t be able to use this machine to prune large branches.

I would have probably rated this machine’s performance higher if I was comparing it to pruning chainsaws. However, when compared to the other multi-purpose chainsaws that I tested, this one wasn’t quite as versatile in its performance.

As mentioned, this chainsaw is powered by a 18V Bosch battery. The great thing about 18V Bosch products is that the batteries are interchangeable. I already had a few smaller Bosch batteries, but I went ahead and used a 4aH battery for this machine – anything smaller would really limit your cutting time.

I was happy with how long the battery lasted – I was able to use it on and off for just over two hours (it would probably be closer to an hour if it was continously running) before the battery level dropped down to one bar. Speaking of which, the way in which this chainsaw has been designed means that you can clearly see the amount of life left in your battery while you’re using the chainsaw, which always makes things more convenient!

In terms of cutting speed, this chainsaw whizzes around at 4.5m/s. It’s worth noting that this is significantly slower than some of the other chainsaws that I tested – as a comparison, the Makita has a speed of 20m/s. However, again, if light pruning is all you’re using this chainsaw for, then you wouldn’t really need it to have a faster speed. 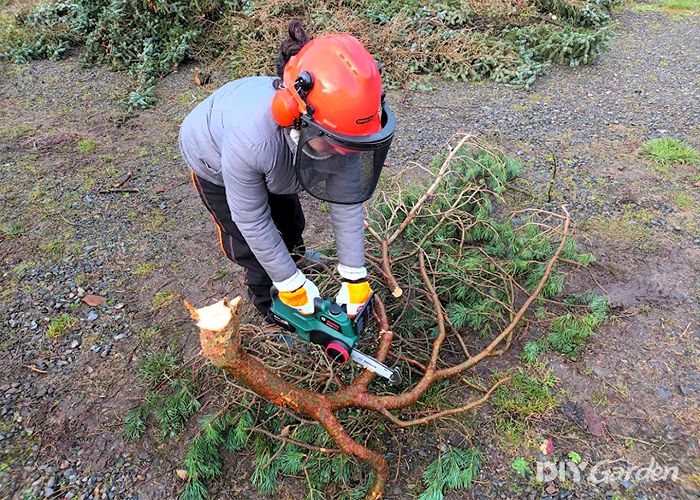 Ensuring that this chainsaw was easy to use was one of Bosch’s priorities when designing the product, and they’ve definitely managed to meet the mark. This machine is extremely compact and lightweight – it only weighs around 3kg, even with the battery in, making it the lightest chainsaw that I tested. If you were planning on taking a chainsaw up a ladder with you to prune a tree, this one would be a good choice. Its small size also means that it’s very easy to use this chainsaw in a controlled way – you won’t have any issues manoeuvring this machine.

Add to this its soft-grip handles and its automatic chain lubrication feature and you have a chainsaw that’s extremely simple to use, even for someone who has never used a chainsaw before.

If you do have some chainsaw experience, you may, like I mentioned, find the protected tip a bit annoying. However, once you’ve adjusted your technique to suit the machine, you should get used to it pretty quickly. 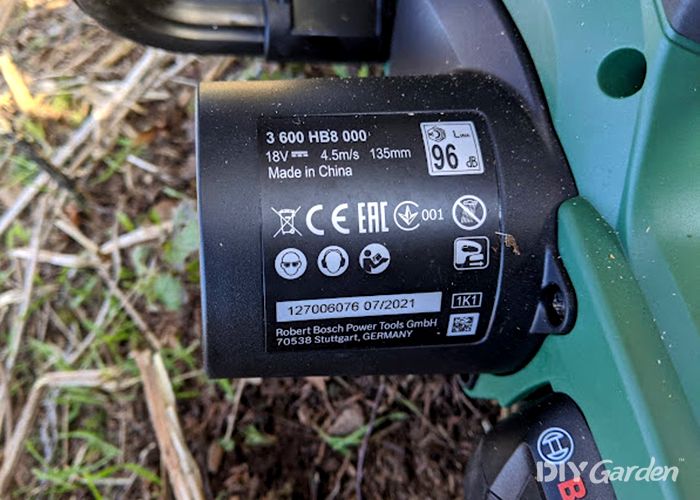 Take a look at this chainsaw on Bosch’s website and you’ll notice a very snazzy video that demonstrates the machine in action. However, what really stood out to me was the fact that the users weren’t really wearing any protective gear, other than a pair of plastic safety goggles.

In my opinion, this is very misleading. Yes, the chainsaw may offer a number of safety features (recoil protection and a chain brake are two vital ones), but it’s still a chainsaw, meaning that it still has the potential to cause some serious harm to the user should things happen to go wrong. I would definitely advise purchasing the necessary protective clothing and accessories if you plan on using any chainsaw, including this one.

As I already mentioned, the chainsaw’s tip guard is in place to prevent inexperienced users from cutting with the chainsaw’s nose. Bosch has also ensured that this chainsaw cannot be accidentally turned on – there’s a button that you’ll need to press and hold before you can pull the trigger to kick the chainsaw into action. Releasing the button will activate the brake, which turns the chainsaw off.

Just like all of the other chainsaws that I tested, this one comes with a plastic protective cover that should easily slide over the bar and chain. Unfortunately, the cover didn’t fit the chainsaw very well – I had to basically hammer it on in order to get the cover to slide over the bar. This isn’t a big deal if you only plan on using the chainsaw occasionally. However, it would get pretty frustrating if you were using it regularly, to the point where you may decide to forgo the cover altogether, which would then be a safety hazard.

In terms of noise, this chainsaw isn’t particularly loud. It officially comes in at 96dB(A) – you wouldn’t necessarily need ear defenders when using it for short periods. That said, if you’re wearing full chainsaw protection, you’ll have ear defenders in place anyway.

It’s difficult to judge how much value this product offers. On one hand, for what it costs, you’re getting a machine that seems to be pretty efficient and reliable. It’s also a Bosch, which is a sign of quality.

However, there’s a lot that this chainsaw can’t do. Like I said, it would be better advertised as a pruning chainsaw, which is why it doesn’t feel very fair to compare its price to the other, more multi-purpose, models out there.

If I needed a chainsaw that was able to tackle trunks and large branches, then no, this one wouldn’t offer much value. However, if light garden work was the focus, then I’d say that you’re getting a pretty good deal with this machine, especially considering the fact that it comes with a high-quality Oregon chain. It’s worth noting that, so long as you have the right tools, this chain can be easily sharpened, which will help to prolong its lifespan.

This Bosch UniversalChain Cordless Chainsaw is absolutely ideal for people who have never used a chainsaw before. Granted, it may not be able to cope with thick wood, but it’s so lightweight, compact, and simple to use. It really is the perfect starter chainsaw for anyone looking for a faster and easier way to prune their garden trees. 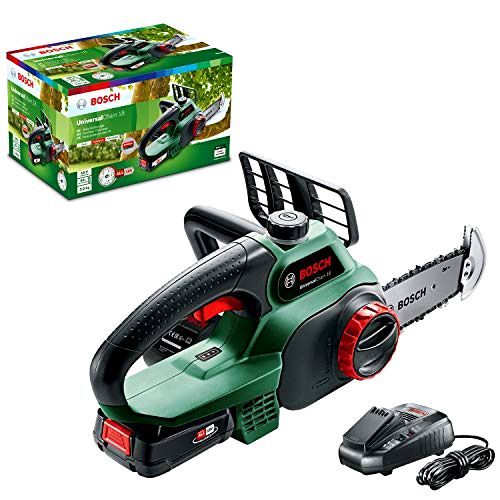