US tool titans DeWalt barely need any introduction at all. Their yellow and black power tools are found wherever anyone’s working hard, and they constantly update their tools to suit both professionals as well as DIYers. The DeWalt DCD776 compact hammer drill set is hands down one of the best entry-level kits you can get. You get a capable combi drill, a 1.5 Ah XR 18 Volt battery, and fast charger all kept safe in a rugged case. What else would you need when starting out?

There’s only one real way to test multiple drills side by side, and that’s by putting them all through the same challenges to see which one comes out on top. I set up a test rig for each drill to tackle timber, brick, and even steel plate.

The idea was to get an idea of how powerful, comfortable, noisy, and well-designed each was. I also kept in mind how big and heavy each drill was. This makes a big difference over time and plays a big part in finding the best drill on my list. 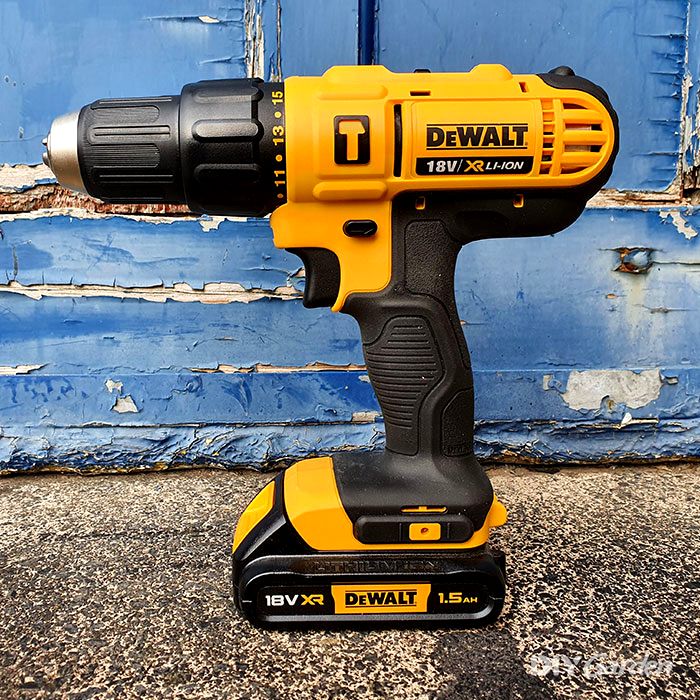 The first thing that struck me about the DCD776 combi drill kit is the case. Even though this is more of an entry-level DeWalt drill, it still comes well packaged in a hard plastic case with sturdy metal clasps. It’s all wrapped up in a cardboard sleeve that makes the whole thing feel nice and premium.

On to the drill itself. It has a traditional combi drill design with a big motor that sticks out around 60 mm behind the grip. It’s chunkier than other brushless versions you can get, but it’s also not as expensive. The larger motor makes this drill slightly top-heavy, but if you pair it up with a larger battery than the 1.5 Ah it will balance out nicely.

Weighing in at 1.3 kg without the battery, this is a rather heavy beast. It’s certainly not the lightest of the cordless drills that I have tested, but that’s to be expected in a brushed motor drill. It’s fairly long as well, at just under 230 mm in length without anything in the jaws. It won’t get into the tightest spots compared with some of the smaller cordless drills on my list. It’s also 225 mm tall without a battery installed.

As you’d expect from DeWalt, the overmoulded rubberised grip section is well sculpted. It fits nicely in the hand, but if I was going to nit-pick, it’s almost too narrow. I’ve got large hands though, so if yours are small it might well be the ideal drill for you! The rubberised section stretches around the back of the motor, giving you an ideal place for a two-handed grip when you need to add a bit more forward pressure.

You get a plastic keyless chuck to tighten down drill or driver bits. It’s not one of DeWalt’s premium all-metal chucks but it feels tough and should be fine for most DIYers. Changing the torque settings and switching between the combi drill’s two speeds both have a nice, positive, and accurate action to them. There’s a little bit of play in the direction selector though, it’s not as confident as some of the more premium combi drills out there. You get 15 different torque settings to play with, as well as the percussive hammer drill mode.

What irritates me though is where the battery meets the drill. One of the first things to get on my nerves with any battery-powered tool is if the battery rattles about in its holder. There’s far too much play in the battery and I worry if the connection is going to hold up over time. It doesn’t help to make this combi drill feel like a quality power tool.

The powerful little LED work light is good for lighting up tight spaces. I personally prefer this type of light. It’s above the trigger rather than on the base of the drill. If you’re poking the drill into a tight space, you can still light it up. It stays on for 20 seconds after you let go of the trigger too, which is a pretty useful feature.

Some users have complained about the fact that the DeWalt logo is just a sticker rather than moulded into the body. It’s not the most impressive move by DeWalt, but I certainly don’t think that this drill is a fake. There’s a screw hole on either side of the grip to allow you to add a belt hook, but it’s not included with this set.

I’m a fan of the case that this cordless drill comes in. The handle is comfortable and there’s a pair of metal catches to keep everything locked down tight. It includes three sections to store spare batteries without them rattling around, and they’ll fit snugly if they’re no bigger than 1.5 Ah. Unfortunately, if you want bigger batteries, they won’t fit!

Another annoying thing about the case design is that you can’t put the drill back without taking the drill or driver bit out. There’s just not enough clearance in front of the chuck. It’s only a small thing but having a bit ready to go straight from the case can save you a bit of time. 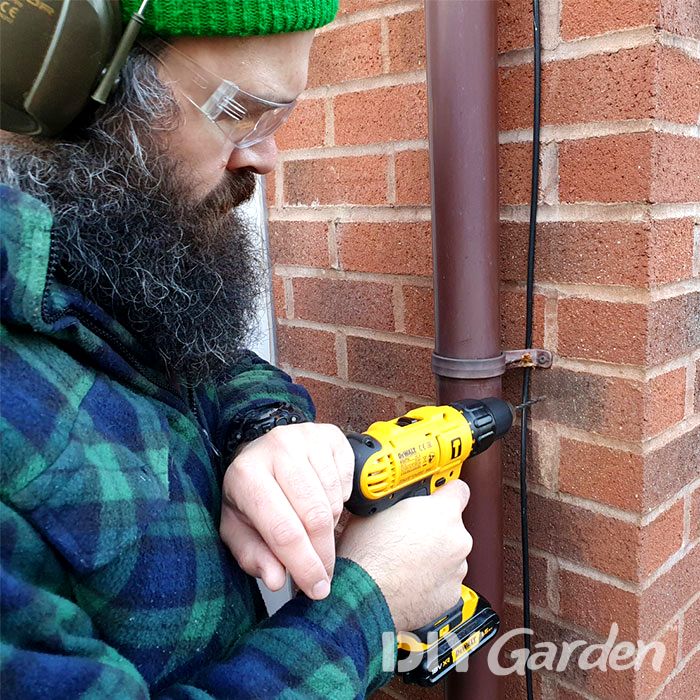 Putting 30 holes into 38 mm thick CLS timber with a 5 mm wood bit was easy. As expected, the motor didn’t struggle or feel like it was being overworked. You can feel the torque from the motor on start-up, so it’s not got the best “soft start” though. The DCD776 feels completely capable and should last for a long time. There was only a small amount of tear-out on the underside of the timber, which was nice.

The solid reliability of this DeWalt combi drill was evident when it came to driving screws. 70 mm long wood screws went in and out without camming or much pressure needed. The 150 mm screw could have kept going through the timber there was that much torque left over! I wasn’t forced to use the drill mode for driving screws, which was a good sign.

Putting this drill to the test against 3 mm of steel plate, it performed as expected by now. It wasn’t the fastest cordless drill that I tested, but at one minute 20 seconds, it was quick enough to not become too uncomfortable. Making lots of these 3 mm holes with an HSS bit would be comfortable enough.

When it came to drilling through a good old-fashioned house brick, it took just 30 seconds to sink a 5 mm wide hole. It was pretty noisy, but you need to expect that with a drill in hammer mode. 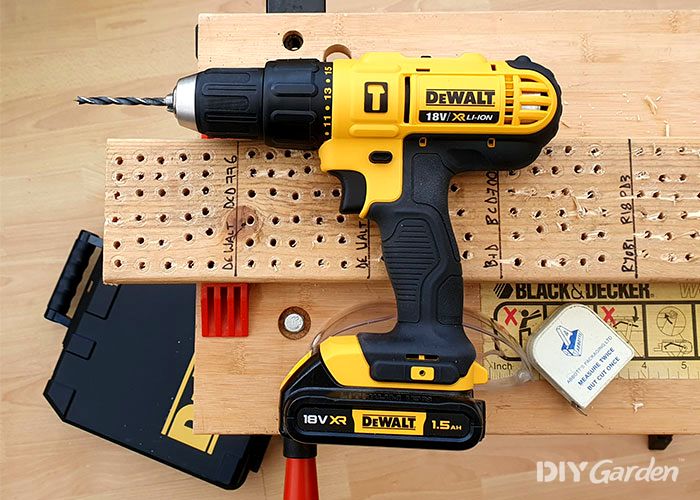 All the best combi drills on the market, as far as I’m concerned, run on 18 Volt batteries. So, it’s good that DeWalt have been working on their XR range of tools for years and years. Supplied with a single 1.5 Ah battery, the DCD776 combi drill kit is ideal for DIYers that aren’t going to push this drill to the limit for hours on end.

If you were a professional tradesperson, you might want a bigger battery to go with this combi drill. 1.5 Ah batteries are slimline and lightweight, but don’t expect to drill hundreds of holes in a row without stopping for a recharge.

The power that this battery system puts out gives this drill a reasonable level of torque. You get 42 Newton metres (Nm) worth of twisting power, and in hammer mode a solid 25,500 maximum beats per minute (bpm). The drill bit is spun up to 1,500 rpm, which isn’t the fastest but perfectly adequate for most DIY jobs.

Luckily the charger supplied with this combi drill is a quality DCB107 fast charger. It should recharge a dead battery to 100% in around an hour, meaning that you’re never going to down tools for too long. I like that you can mount it on the wall as well, they’ve even printed the distance you need between screws on the back!

I always use ear defenders when I’m using the drill settings on a combi drill. The hammer function in particular can make an incredible amount of noise. I wouldn’t dream of using one without my trusty Peltor ear defenders on, and neither should you.

Rated for a sound power level of 96 dB, this drill puts out the same level of noise as a motorbike engine running. It’s not going to deafen you instantly, but over time it will damage your hearing if unprotected.

When it comes to using the driver function, the DCD776 doesn’t run any louder than any of the other cordless drills that I tested. Only if you’re using the top speed and high torque levels will this drill make an excessive amount of noise.

As with any power tool, the DeWalt DCD776 needs to be treated with respect. The proper personal protective equipment (PPE) should be always worn. Safety glasses are essential, especially when drilling into masonry, and so is a dust mask.

If you’re using rotary power tools, you need to be mindful of any loose articles of clothing or hair that could get trapped. Also, unless you’ve got a firm grip on a drill, if the drill bit gets stuck you can get a serious amount of kickback that can twist your wrist around.

For what you pay, you get one of the best names in the business, a handy carry case, a charger, and a battery. If you’re a DIYer and you don’t already own batteries or a charger for another power tool brand, the DCD776 combi drill kit is an excellent place to start.

However, it’s not the best performing cordless drill you can get on my list. It’s from the right tool make, but for a few notes more you could get the incredibly powerful DeWalt DCD796N instead. The real value of this combi drill is for people who haven’t invested in 18V cordless tools already and want to get in on the action.

For DIYers, this is an ideal place to start if you want to look the part. Professional tradespeople might expect more features and higher build quality from a combi drill though. There are a few too many plastic parts, a rattle that got on my nerves, and no place to store batteries any bigger than little 1.5 Ah ones.

Performance-wise, it’s exactly what you’d expect from a DeWalt combi drill with these specs. It did the job comfortably, but it wasn’t going to win any speed records. The brushed motor is a bit on the large size and it’s a tiny bit front-heavy, but the DeWalt DCD776 is a dependable drill that should last for a long time.

This set is firmly aimed at someone who wants a decent quality cordless drill but doesn’t need all the bells and whistles of a premium trade-level tool. It’s DeWalt, so you know you’re not getting a piece of junk. It lacks a bit of refinement, and you don’t get any bits thrown in, but the DeWalt DCD776 is still a solid choice.

This Article Was a Team Effort!