In this guide we’ll look at the best cable reels for the UK market.
I’ve compared style, features, cable length and cost
to give you my top recommendations.

What Are The UK's Best Cable Reels? 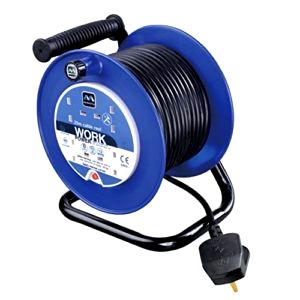 The Masterplug LDCC2513/4BL-MP Four Socket Open Cable Reel is one of the best extension reels on the market thanks to its 25m cable, comfortable handle and safety rating for use with high Amp electronics.

Masterplug are indoor and outdoor power experts with a huge range of quality extension reels, cables and travel adapters. The cable reel I got hold of is a great addition to any garage or home workshop due to its rugged steel frame and extra-long cable. Unless you’ve got an enormous garden, it’ll reach just about anywhere you need it.

Rated for 13 Amps, it can handle the most demanding equipment including lawnmowers and corded power tools when the cable is fully unwound. It stands up nicely on the frame and you can reel everything back in again using the big handle. 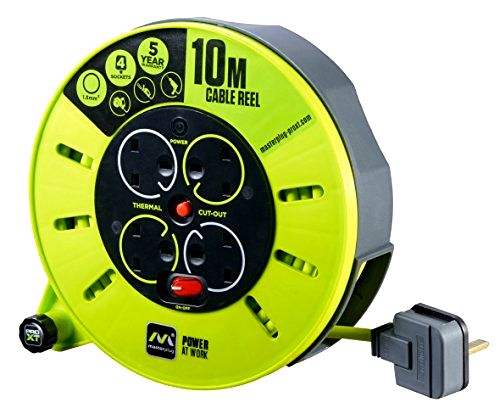 What sets this cable reel apart from the rest of the competition is the power switch on the cable reel body itself- you don’t have to traipse back to the wall socket to turn everything off- it’s a nice touch. Although this particular cable reel is the 10 metre version, there is up to 50 metres of high-visibility cable available in the Pro-XT range, so you’ll never be out of reach. 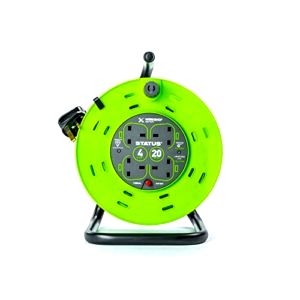 Built for when you need four sockets and 20 metres of cable, the Status four way is a reliable open cable reel that is ideal for use around the home and even in the garden. I looked at the 20-metre version, but you can get up to a whopping 50 metres of cable for the biggest of gardens.

The bright green or red case is made from tough plastic and the cable reel is black tubular steel with a plastic handle. A rubber grip on the handle would have been a nice touch, but it’s not uncomfortable to reel out and back again. 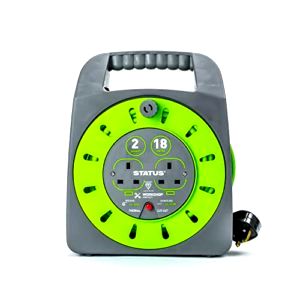 The S18M2G13ACR4 is a two-socket cable reel from West Yorkshire’s cable experts Status. With18 metres of cable to reel out, you shouldn’t have any problems reaching the bottom of your garden or the top of your tallest ladder.

It’s a well-made and robust cassette-style cable reel with the cable tucked inside the high visibility green plastic casing. If you only need two sockets then this is the best cassette cable reel you can get hold of for the money. 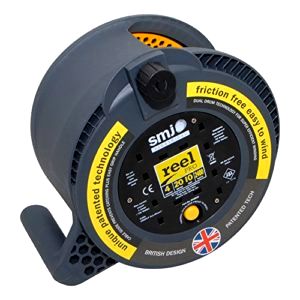 The RP2010 Pro Cable Reel is a cassette style pro cable reel. It uses a patented design rigid plastic housing that feels seriously solid but is still lightweight at just 1 kg. I like the bright yellow cable, it’s easy to see it no matter how untidy your work area is. All the safety bases are covered, and the rewind action is fast and smooth.

Proudly designed here in the UK, the RP2010 Pro Cable Reel is just one product from Berkshire based SMJ Electrical. They’ve been making quality electrical goods since 2001, so they know all about how to make the best cable reel. 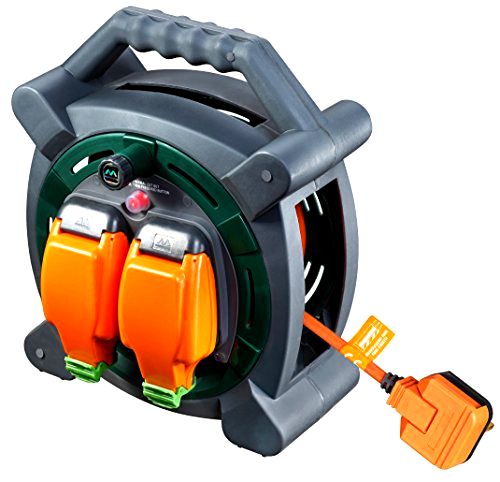 Another quality cable reel from Masterplug is their HLP2013/2IP two-way weatherproof cable reel. When you want to run your garden equipment and not worry about the weather, the pair of dust and splash-proof sockets with protective flip covers are just the thing you need.

Whether you’re mowing the lawn or trimming the hedges, it’s the best cable reel for outdoor use. With 20 metres of cable to play with, you’ll reach even the furthest corners of your garden without worrying about rain stopping play.

Although you should never use an outdoor cable reel as a permanent electricity supply for an outside building or shed, you can rest easy knowing that the Masterplug HLP2013/2IP comes with a safety cut-out switch and complies to all British safety standards. 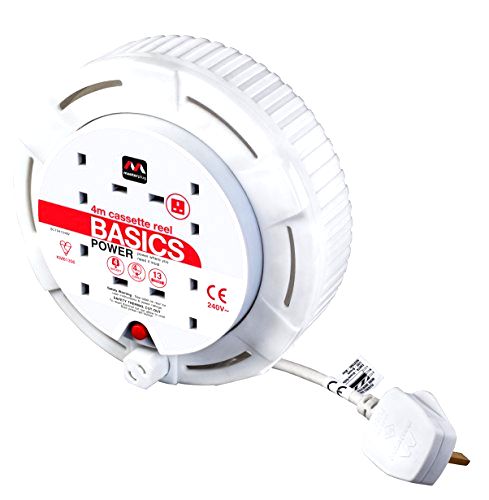 With more than 30 years in the business, Masterplug know a thing or two about making the best cable reels. The SCT0413/4W-MP is a basic and inexpensive round extension lead that comes with several useful safety features.

The white casing holds 4 metres of power cable and gives you four sockets to plug into. There’s a thermal safety cut off in case the unit overheats, and a safety button you need to press to make it work again once it’s cooled down.

If you’re looking for a safe and reliable little four-gang extension cable, this is a good choice. It’s not got the longest cable on my list, but you don’t always need loads to play with. 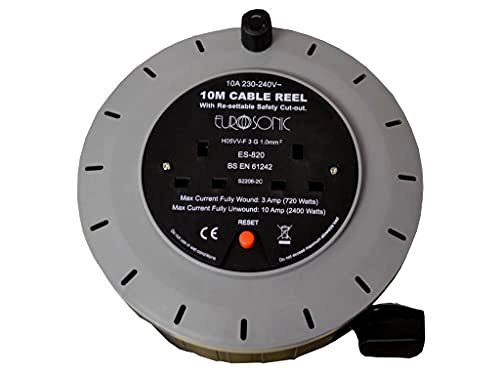 The Centurion brand produces all sorts of safety equipment for home and commercial use. The EXT1038 extension reel is a handy extension cable for a reasonable price.

Boasting 10 metres of cable and two sockets to plug in to, this is an ideal budget cable reel for reaching a bit further than some of the competition. Conforming to BS EN 61242 safety standards, the cassette contains a thermal cut out in case of overheating.

Designed to power up two devices up to 720 Watts when wound up, or 2,400 Watts when fully unwound, this is just enough cable to reach across even the biggest rooms in the house. For the price, it’s one of the best 2-gang extension reels you can get right now. 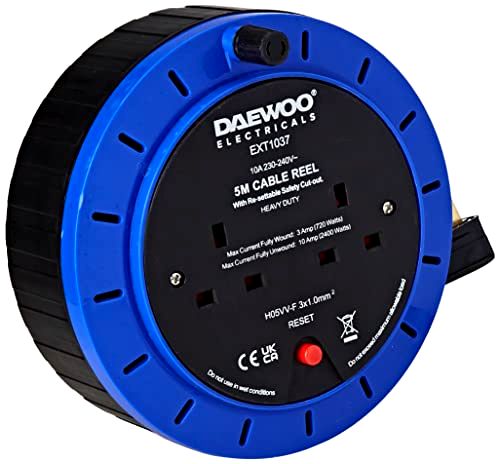 South Korean engineering firm Daewoo make an incredible range of products, and their electronics division are responsible for everything from blenders to TVs. The EXT1037 is a useful extension lead that is basic but very useful.

Containing five metres of cable and able to support two sockets, this is an ideal little cassette reel for when 10 metres is just too much. It’s dangerous to overuse a wound up extension cord, so it makes sense to have just as much as you need.

Featuring the thermal cut off and reset button required by British safety standards, this cable reel is guaranteed to wind up easily when you’re done with it. It’s just the thing you’ll need to power up your tools when you need a bit more reach.

How to Choose The Best Cable Reel

When you need to reach the back of your garden or the very back of your loft, it makes sense to use the best cable reel you can get your hands on. There are a few different types of cable reel to choose from and a few safety precautions to take before you start though.

An open reel cable is set up with a metal frame that stands on the floor and a drum that holds the cable wound around it. You can pull the cable out or hold the handle and walk with it to where you need to go.

Cassette cable reels work in the same way but the cable itself is hidden inside a plastic casing. This keeps the cable safe from scuffs and cut when wound up, but they tend to get tangled up and can be harder to unwind.

Unless you buy a weatherproof cable reel, you should never attempt to use a cable reel in the rain or on wet ground. Cable reels are not meant to be used as permanent electric supplies for outbuildings or gardens and should only be used to temporarily power devices.

Be careful when you reel out an electrical cable as it can easily cause trips and falls. If you’re using an extension cable to power a lawn mower, always remember where your cable is routed to avoid cutting it. This is when a high-visibility cable comes in handy.

Never overload a cable reel- they’re not designed to have high load electrical devices plugged in- always refer to safety guidelines on the case.

When you power a device with your cable reel, it creates heat within the cable. This heat needs to be able to dissipate into the air around it, but if the cable’s wound up it’s got nowhere to go. A mass of wound-up cable can become extremely hot and fuse together or even set on fire. Luckily, the best cable reels have thermal cut-offs, but it’s better to not risk it and always run your cable reels completely unwound.