In this guide I’ll take a look at the best smart plugs for the UK market.
I’ve compared energy-saving features, dimensions, number of plugs in the set, and cost
to give you my top recommendations.

What Are The UK's Best Smart Plugs? 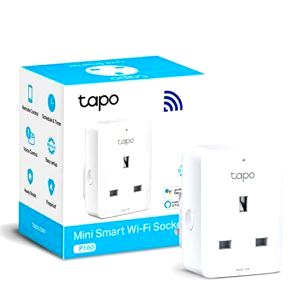 The world’s number one provider of Wi-Fi products, TP-Link Technologies are the go-to brand for anything net-connected. Their smart home brand Tapo have made what I think is the best smart plug available right now. The P100 smart plug can turn any old electronic device into an internet-connected smart device.

It’s a good-looking, slimline, and minimalist white device that is small enough to fit in a standard UK plug socket without blocking the one next to it. There’s a power button on the side, and a micro-LED that displays status information as well. Rated up to 13 Amps, this is a capable smart plug that can cope with most household appliances.

What I really like about this clever little smart plug though is the app that comes with it. It’s supported by both Android and iOS, and is really simple to use. It supports voice control that works with Google Assistant as well as Amazon Alexa. You can add multiple devices, rename them, and even set up schedules and timers for your devices. It’s brilliant. 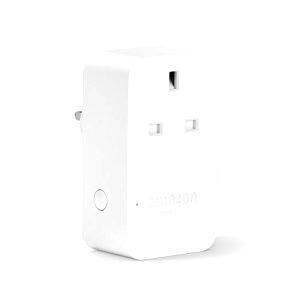 Tech firms don’t get much bigger than this. Amazon have been making their own clever bits of kits since 2009, and their new Certified for Humans project promises smart homes made easy. Simply known as the Amazon Smart Plug, it works seamlessly with Alexa-enabled devices or the Alexa App.

It’s a simple and straightforward-looking thing, there’s a button on the side and a tiny LED to let you know it’s working. One of the best features of this smart plug is how easy it is to pair with your Alexa App. You plug it in, and it pretty much pairs itself! Everything about this device is simple- all it does is turn on and turn off whatever you plug into it, up to 13 Amps.

It might lack a few features compared with the Tapo P100, but for most users, having a voice-controlled switch is good enough. It’s also a bit larger, but Amazon have included a buffer on the back of the plug to stop it from wobbling about. If you’re already using Alexa, this is the best smart plug for it. 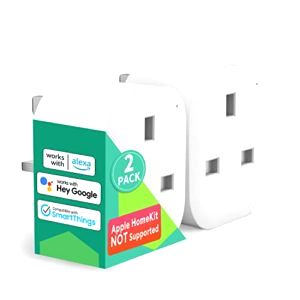 Founded by a group of experts from companies as big as Microsoft and TP-Link in the tech world, Meross have created a whole family of smart devices for the home. The Smart Plug Mini is just that, a super small set of two Wi-Fi-enabled switches to turn just about any home device into a smart one.

These 13 Amp smart plugs are designed to work with everything from Amazon Alexa, Google Assistant, SmartThings, and even IFTTT applications. It’s a brilliant 3rd party smart home device, because it allows you to create routines and schedules via the onboard app.

Compared with the Amazon Smart Plug, the Meross plugs are also incredibly small. They don’t take up much more room than a standard UK wall plug. You can use them on a two-gang wall socket without blocking the other one. And for the money, you get two to play with! 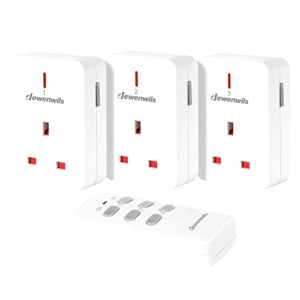 With more than 200 products ranging from extension cords to Christmas lights, DEWENWILS also happen to make one of the best remote control smart plugs on sale right now. Even though it’s not as high-tech compared to the Tapo Wi-Fi smart plug system, it’s still a clever bit of kit.

The idea is quite simple. You get a set of three slimline UK 13 Amp plugs, and they’re operated with a Radio Frequency (RF) remote control. This means you don’t need a line of sight to the plug to switch your devices on and off. It’s the perfect solution for controlling hard-to-reach sockets, and it even works through walls!

Rated to work up to 30 metres away, they’re easy to program as well. DEWENWILS have been clever with the way you can set all the plugs to operate with just one button on the remote if you want. You can even set multiple RF remote controls to operate just one plug. 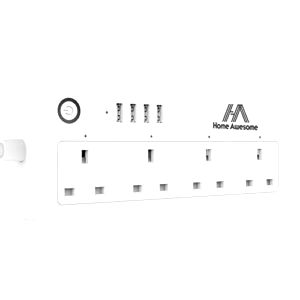 There’s not much to say about the Home Awesome brand, but I’m pretty sure that if you had one of these smart power strips, your home would at least be a bit better! Rather than creating a single smart plug socket, Home Awesome have gone all the way and come up with a four gang extension cord that also has four USB sockets built-in.

Designed to be compatible with popular smart home providers Amazon Alexa and Google Assistant, this is an instant voice-controlled smart home upgrade for all your gadgets. What makes this power strip really clever is that you can control the individual AC sockets with your voice! The USB ports all act as one unit though.

The sockets are rated to 13 Amps, and the USB ports charge at a decent 12 Watts. They’re all spaced out on a pretty chunky white box that comes with a 2 m extension cord, which is handy to have anyway! It’s a shame this power strip doesn’t come with a way to attach it to a wall, but you could do it yourself with some double-sided tape if you want to. 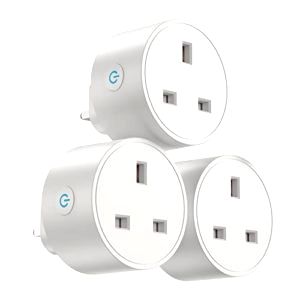 Like the Home Awesome smart home upgrade, there’s not a lot to say about BJS, except that they make one of the best budget smart plugs I’ve come across so far. They’re small, well-designed, and work with the most popular smart home applications.

Designed in minimalist white and featuring nothing but a small power button on one side, this is as simple as it gets for a smart home upgrade. I like the little cut-out section on the back end of the plugs, making them compatible with switched plugs unlike the “smart” plugs of days gone by.

They work with Amazon Alexa, Google Assistant, and Smart Life apps as well. BJS have included some clever features like grouping smart plugs together so they can be controlled with one action in the app or setting up routines to control complex tasks with one command. And you get two of them for a bargain price!

How to Choose The Best Smart Plug

We spend more of our time and money on gadgets and appliances, but lead busier lives than ever. The ability to control almost anything electronic in your home from anywhere in the world via your smartphone is nothing short of incredible. And what’s better, the best smart plugs on the UK market are cheaper than you think.

What are the best uses for smart plugs?

You might still think that turning a home appliance on with your smartphone is just a gimmick, but clever use can have a big impact on your life. The ability to remotely control any socket that an electronic device is connected to could fool an opportunistic burglar, make your coffee for you while you lay in bed, or connect them to your smart meter and save yourself some serious money.