Still one of the most recognisable tool brands out there, Black+Decker have been in the game since they started in the USA in 1910. It’s the company that invented the handheld electric drill, so they should know a thing or two about making the best cordless drill for the UK market.

While the Black+Decker BCD700S1K isn’t the most capable cordless drill on my list, it’s a good value tool that will suit a lot of light DIYers, if not seasoned professionals. You get a case, a battery, a charger, and a double-ended screwdriver bit as well. It’s just about enough to get you started!

Seeing as I’m trying to find out which is the best combi drill available right now, it made sense to test all of them side by side. To try and compare them all on an equal footing, I set up a test rig to put them through their paces on different materials. Namely, timber, brick, and steel plate. I also drove a load of screws into and out of timber, so see how it went.

To get an overall picture of this drill, it wasn’t enough to just look at how fast it worked. The best drills are ones that are well thought out, cleverly designed, and comfortable to use for long periods of time. I paid close attention to how the drill handles and if I’d reach for it more than another on my list.

The BCD700S is a cordless drill that annoyed me and surprised me, and probably in equal amounts. Black+Decker make a huge range of DIY-level kit, so I wasn’t expecting a trade-level tool, but there were some features missing that should have been there.

The tiny little two-part plastic chuck was something I really didn’t like. It was hard to tighten down and could only manage 10 mm wide bits. Performance-wise, drilling holes was slow thanks to a sluggish motor speed. I was quite impressed with how well it could drive home screws though, so it might be a better replacement for an electric screwdriver.

Overall, this is a reasonably capable cordless drill that’s let down by a lack of work light and annoyingly stingy case size. If anything, it feels like Black+Decker have tried to save money by leaving out some of the things that most DIYers need. A little disappointing, as this cordless drill could be so much better. 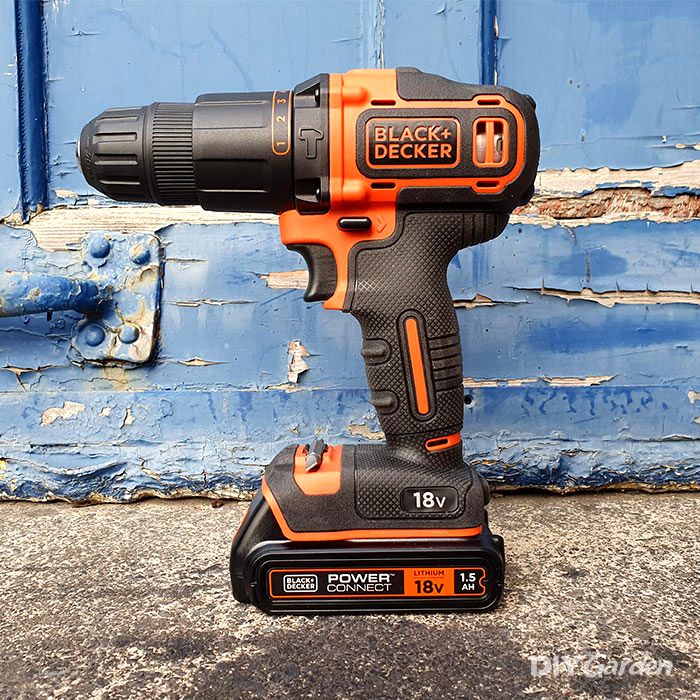 The BCD700S was delivered to me in a blow moulded plastic case. It’s a small case compared with the chunky DeWalt TSTAK, so it should be ideal for stashing in a cupboard or under the workbench. The handle is comfortable, but the box has a habit of falling over thanks to the strange spindly legs on the bottom.

This small size gave me my first problem when I opened the case though. It’s only minor, but you can’t put the drill back in the case with the battery attached. There’s no space for it, and you can’t put it away with a long drill or driver bit in place either. It’s the small design flaws like this that waste time when you go to put your drill away.

The look of this cordless drill is rather impressive. Decked out in B+D’s recognisable black and orange colours, it’s a good looking tool. The grip shape is comfortable as it’s been ergonomically designed to fit the hand, but it’s a bit small for me. I do have large hands though, so it’s something I’m used to.

The grip texture, however, is a bit strange. It almost feels sticky and leaves a bit of residue on your hand once you’ve been holding it for a while. It’s certainly grippy but it’s a little unpleasant at the same time.

Even though this cordless drill uses a brushed motor, it’s still compact and feels well-balanced once the battery is in place. This goes a long way to making it feel good when you’re using it, like it’s an extension of your arm and not an unwieldy weight.

At the business end of the drill there’s a plastic chuck. It can only take drill bits up to 10 mm, so bear that in mind if you’re often reaching for things like 12 mm diameter wall plugs. It’s also got that odd locking system where there are two rings to tighten down, like the one on the Terratek cordless drill. I much prefer the one-piece chucks that can be tightened down with one hand.

Behind the two-piece chuck there’s a chunky torque selector ring. You only get ten torque settings to choose from, but this cordless drill does have a hammer setting for working on block or brick. There are also two gears to choose from, selected with the chunky switch behind.

Measuring 195 mm from nose to tail, it’s not the most compact cordless drill on my list. Weighing just 926 g without the battery means it’s still easy to manoeuvre though, which was welcomed in an 18V drill.

Something that Black+Decker have worked out is how to stop a battery from rattling about. Compared with the expensive DeWalt DCD796 that made a bit of a racket, the battery here is held tight with a little spring. It’s a little bit of attention to detail that I really like.

I do like the little bit holder they’ve added to the base of the handle though. You get a double-ended Phillips and flathead bit that will surely come in handy sooner rather than later. 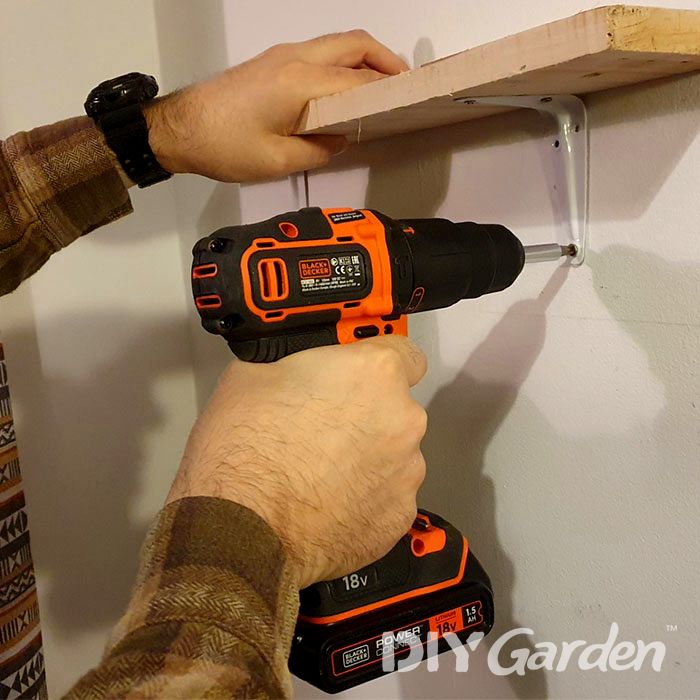 Starting with drilling 30 holes in 38 mm thick CLS timber with a 5 mm wood bit. It took a bit longer compared with some of the more professional cordless drills that I tested, like the DeWalt DCD796. The drill didn’t exactly struggle, but the sluggish top speed was noticeable, and I was getting bored by the 20th hole! There seems to be enough power, just not enough rpm. There was a lot of tear out on the underside of the timber as well.

The Black+Decker BCD700S was surprisingly capable when it came to driving screws. Driving 70 mm screws without pilot holes into CLS timber was a breeze. In fact, there was so much torque I needed to be careful not to bury the screw heads. The same went for the 150 mm wood screw. It just kept on going! Really impressive driving performance from the black and orange beast.

Then it was on to drilling through 3 mm thick steel plate. Using a 3 mm diameter HSS bit, it took a one and a half minutes to make it all the way through. Not the slowest time, but I wouldn’t want to drill more than a few holes in a row with this tool.

Testing out the hammer mode on this cordless drill called for making a 5 mm diameter hole in a house brick. The slow drill speed didn’t matter here, and the reasonable bpm level made short work of the house brick. Just 20 seconds to make the hole, which was quite impressive. 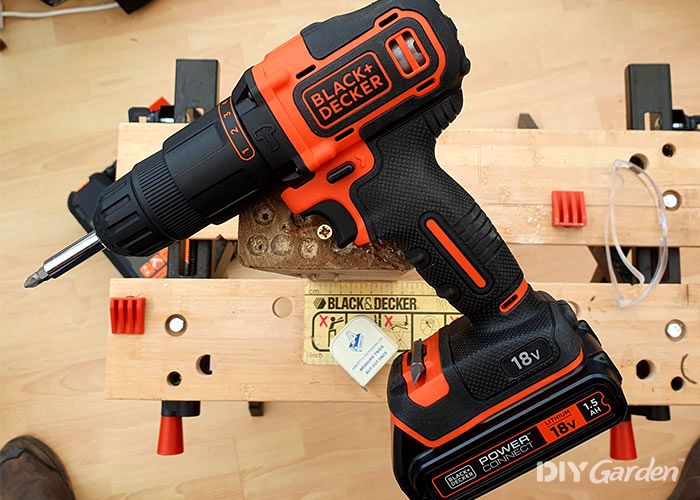 The driving force behind the Black+Decker BCD700S comes from a single 1.5 Ah battery that’s included with the kit. It’s charged by a 400 mA charger that isn’t exactly speedy, so make sure you’ve plugged in with plenty of time to spare. The charger itself is a tiny little thing you could fit in your pocket.

Thanks to the 18V battery system, the specs for this cordless drill aren’t too bad. You get a maximum drilling speed of 1,400 rpm and in hammer mode a reasonable 21,000 bpm. You can marry those numbers up with a solid 40 Newton metres of torque, which makes this one of the more capable budget cordless drills on my list.

The BCD700S is rated for a sound power level of 99.7 dB. That’s roughly the same as listening to an orchestra sitting in the front row! Set to hammer mode and drilling into block or brick, and this is one loud power tool.

The quality of the noise that this drill puts out is quite refined though. It sounds more like one of the more expensive cordless drills I’ve tested, and there’s none of the clunks or clicks when you take your finger off the trigger.

The only problem I came across with the BCD700S cordless drill, but none of the others, might not be a problem at all. Inside one of the vent holes close to the bottom of the grip, you can see the wiring inside the drill. The only cause for concern is that dust and other dirt could easily get into these large holes and attack the exposed wiring.

Besides that, this cordless drill is no more dangerous than any other the others on my list. As long as you use a safe drilling technique and wear the correct level of personal protective equipment (PPE), it should not cause any problems. Always wear ear defenders, eye protection and a dust mask when working with block and brick.

Black+Decker might not make the same top-drawer equipment as they did decades ago, but it’s hard to ignore a little kit like this at this price point. It’s less than half the price of the DeWalt DCD776 set, which makes it ideal for the home DIYer that wants a brand name they’ve seen before.

The Black+Decker BCD700S is not the highest performing of the cordless drills I tested, and it can only take 10 mm drill bits. It feels a bit like B+D have really stripped back the features to sell it at this price. You don’t get a light and there aren’t many torque settings, but it’s good enough for light use around the home and garden.

The BCD700S is a cordless drill that annoyed me and surprised me, and probably in equal amounts. Black+Decker make a huge range of DIY-level kit, so I wasn’t expecting a trade-level tool, but there were some features missing that should have been there.

The tiny little two-part plastic chuck was something I really didn’t like. It was hard to tighten down and could only manage 10 mm wide bits. Performance-wise, drilling holes was slow thanks to a sluggish motor speed. I was quite impressed with how well it could drive home screws though, so it might be a better replacement for an electric screwdriver.

Overall, this is a reasonably capable cordless drill that’s let down by a lack of work light and annoyingly stingy case size. If anything, it feels like Black+Decker have tried to save money by leaving out some of the things that most DIYers need. A little disappointing, as this cordless drill could be so much better.