The Bosch AXT Rapid 2200 Blade Garden Shredder is the powerful, yet cost-effective model in Bosch’s range. I put it to the test to see whether the balance between performance and price was there. Here’s what I discovered…

Best garden shredder for home use

How I Tested The Bosch AXT Rapid 2200 Blade Garden Shredder

According to Bosch, the AXT Rapid 2200 Shredder is capable of shredding all soft green garden debris, as well as some woody material. It’ll take in branches that are up to 40mm in diameter and, thanks to its high-precision blades, will leave you with finely-cut shredded material. Bosch also claims that the machine’s fast-speed hopper, along with its quickly-rotating blades, means that you can shred up to 90 kg of material per hour.

To test this out, I decided to do a spot of weeding and hedge clipping, and ended up with several big bags of leylandii, ferns, ivy, sycamore, willow, and brambles to shred. Since I’m in the process of building a dead hedge as a windbreak for my poultry, I also took some older woody material from my stash – mostly fruit tree prunings, including apple, cherry, and plum.

At this stage, I did a little research to see what other uses the shredder could potentially have. The two suggestions that stood out to me were shredding cardboard and chopping hay. I usually use larger pieces of cardboard directly in my garden (they make life so much easier when creating no-dig beds), but smaller cardboard boxes are thrown into the compost heap where they take a while to break down. Shredding them would rapidly speed this process up.

In terms of chopped hay, every smallholder will know about its benefits for animals, but will also be aware of how hard it is to access when you don’t have your own tractor or the right machinery. So, I was curious to see whether this garden shredder could provide a solution.

I tested the shredder over the course of two weeks, with two hours being the longest that I continuously ran the machine for.

Our Verdict of The Bosch AXT Rapid 2200 Blade Garden Shredder 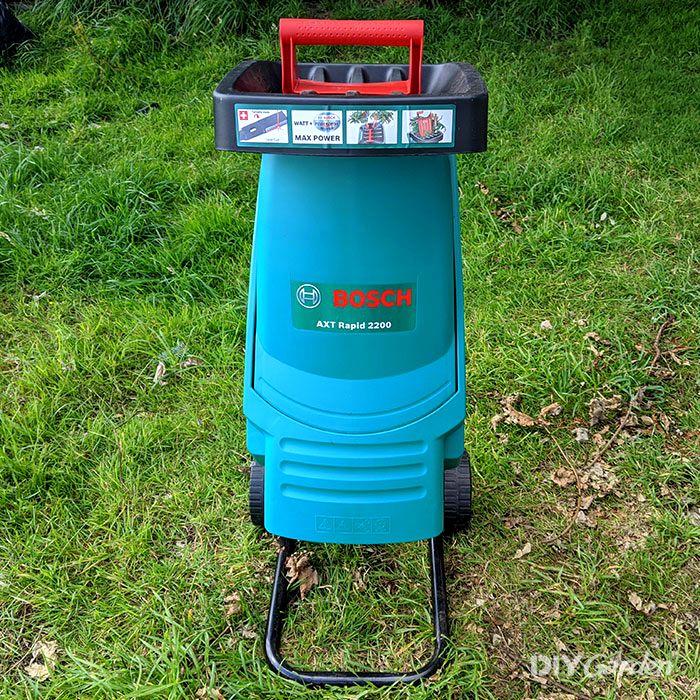 Bosch calls the packaging for this shredder “frustration-free”, and, for once, I would have to agree. Open the box and you’ll see three clear sections, without any annoying plastic wrapping: the shredder, its frame, and its two wheels. The frame and wheels have to be attached to the shredder, but everything you need for this is included in the box. Having to spend ages on assembly really puts me off a product, so I liked that the shredder was ready to go in less than ten minutes.

Once assembled, it’s instantly apparent that this is a Bosch product. Logo aside, the colours are clearly Bosch, as is the fuss-free design. Going by outer appearances only, the shredder looks like a capable and high-end machine.

Try moving the shredder around and you appreciate its design even more. At 12 kg, it’s sturdy enough to manoeuvre over rough ground, but also light enough to pick up if necessary. You can easily carry it up or down any steps if you need to. It has a relatively compact in design, which goes some way towards making it easy to store; however, unlike many of its competitors, the AXT Rapid 2200 doesn’t have a removable hopper, meaning that it still takes up a fair bit of space.

The power cable for this shredder is 4 metres long, which is great compared to many of the other electric garden tools out there, but did still require the use of an extension lead.

One point I did note when putting the shredder together was the lack of a collection bag or container. Bosch very conveniently sells collection bags separately. However, the way in which the shredder has been designed means that there’s enough space under the output chute to place a standard-sized bucket, which is exactly what I did. 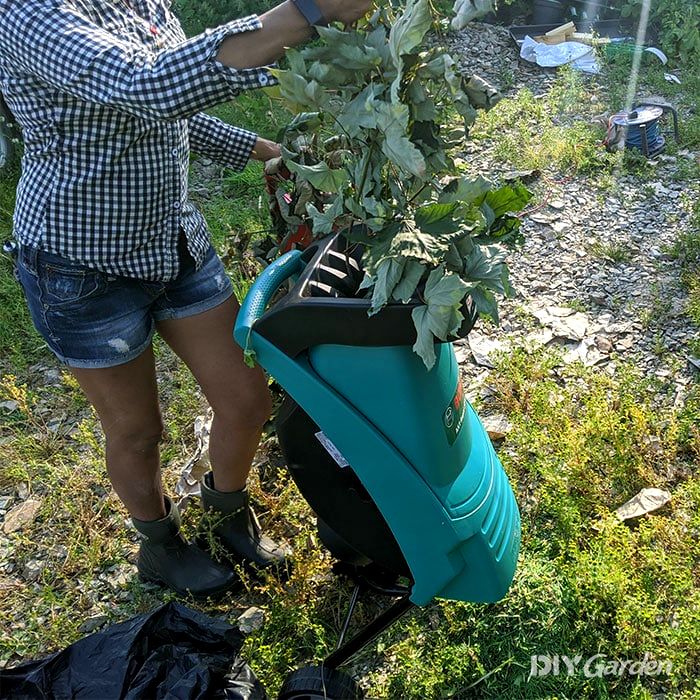 When it comes to performance, the Bosch AXT Rapid 2200 Garden Shredder excels. To start with, it’s easy to use. You can start feeding material into the machine as soon as you turn the power dial. While it doesn’t have an automated feature that pulls the material in, the hopper has been designed with rollers that make it easy to insert your garden waste.

Unlike many of the other shredders on the market, this one doesn’t jam easily. This is partly down to the fast speed at which the blades rotate; it was so efficient that I wasn’t actually able to keep up with how quickly it was working through some of the material that I fed in!

I started with conifer clippings and then moved on to softer weeds – it handled all of these without any problems. I then tried some thicker branches.

Since I had already made sure that nothing was thicker than 4mm, I expected the machine to pull these in without issue. It worked well with thinner branches, but branches that were at the 4 mm mark caused the shredder to struggle.

When I fed the cardboard through, the machine wasn’t too happy, but still took it in. It shredded it beautifully, but I wouldn’t want to use it for cardboard on a regular basis – you have to push the cardboard in just a little too hard, and this would probably end up causing some damage to the shredder in the long run.

It didn’t cope well with hay either. It ended up jamming, but the blockage was easy to remove by opening up the front of the machine. However, other than that, the shredder only jammed once during the entire testing process.

In terms of the shredded material produced, this was very consistent in size and quality, no matter what the machine was actually shredding.

While I didn’t want to weigh out 90 kg of garden material, I was still eager to test Bosch’s claim that the shredder is capable of working through that volume in just an hour. So, I weighed out 5 kg of material instead, mostly consisting of hedge clippings. It took me about ten minutes to shred this, going at quite a slow, measured pace, so I would say that 90 kg per hour is pretty attainable if you were to work somewhat faster than I did!

In all honesty, the power of the Bosch AXT Rapid 2200 Garden Shredder was better than I expected. Having had it in mind that this was the brand’s entry-level model, I assumed that it would be just a little more than adequate.

However, it has a powerful motor that easily copes with being used for a couple of hours straight. It works through material quickly and efficiently – you can literally feel its power when you’re feeding in longer branches.

The only reason I’ve marked it down here is because I know there are more powerful garden shredders on the market. Don’t get me wrong, this shredder offers great power considering its size and manoeuvrability, but I know it’s not the most powerful one out there.

Living on a rural farm means that I’m often around noisy equipment, so I didn’t find the Bosch AXT Rapid 2200 Shredder to be particularly loud.

However, if I lived in an urban environment then I would probably feel a little different. This is a machine that your neighbours would definitely hear. Although I didn’t wear ear defenders while using it, simply because I was moving around the garden every few minutes to empty buckets or gather more material, you probably should if you’re going to be standing next to the shredder for an extended period of time. 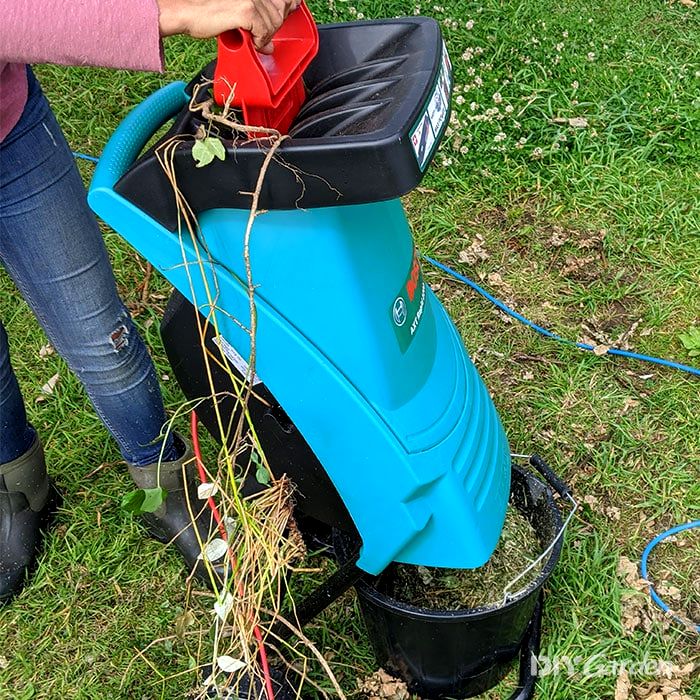 Bosch has clearly put a great deal of thought into ensuring that the AXT Rapid 2200 Shredder is as safe to use as possible. The machine won’t even turn on unless the output chute is correctly interlocked in place, and the red rubber flaps keep fingers away from the blades.

The shredder comes with a plunger that you can use to push soft material through the hopper. This is actually quite useful, especially with wetter material, and I ended up using it more than I thought I would.

Although the AXT Rapid 2200 is the cheapest garden shredder in Bosch’s range, it’s true that there are lower-priced models from other brands out there. However, spend some time comparing features and this Bosch shredder really stands out – in my opinion, you get more than what you pay for.

Of course, when considering value for money, you need to think about both the up-front costs as well as maintenance. From its performance so far, I have no reason to think that the machine will fail in any way.

The only potential issue could be the blades – they’ve served me well so far, but heavy usage could blunt them in a matter of months. This could be why Bosch has fitted this shredder with double-sided blades – simply turn them over and they’ll be as good as new.

However, once you blunt both sides of the blades, Bosch doesn’t recommend having them sharpened – you’ll need to purchase new blades instead. This won’t be an issue for a while if you’re only going to be using your shredder lightly, but it’s something that heavy-duty users should consider. 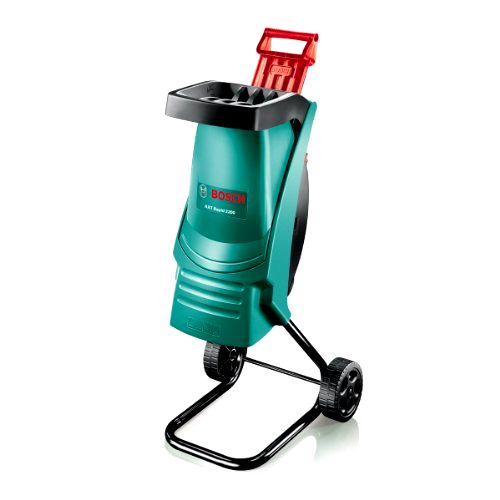