Not only is oregano so easy to grow, but it’s also a perennial – once your oregano plants get going, they’ll produce fragrant leaves and flowers year after year, often in the winter too! If you would like to jazz up your meals with this intense, antioxidant-rich herb, here’s everything you need to know about growing your own oregano at home.

When to Harvest – Jun-Jul

How to Grow Oregano at Home 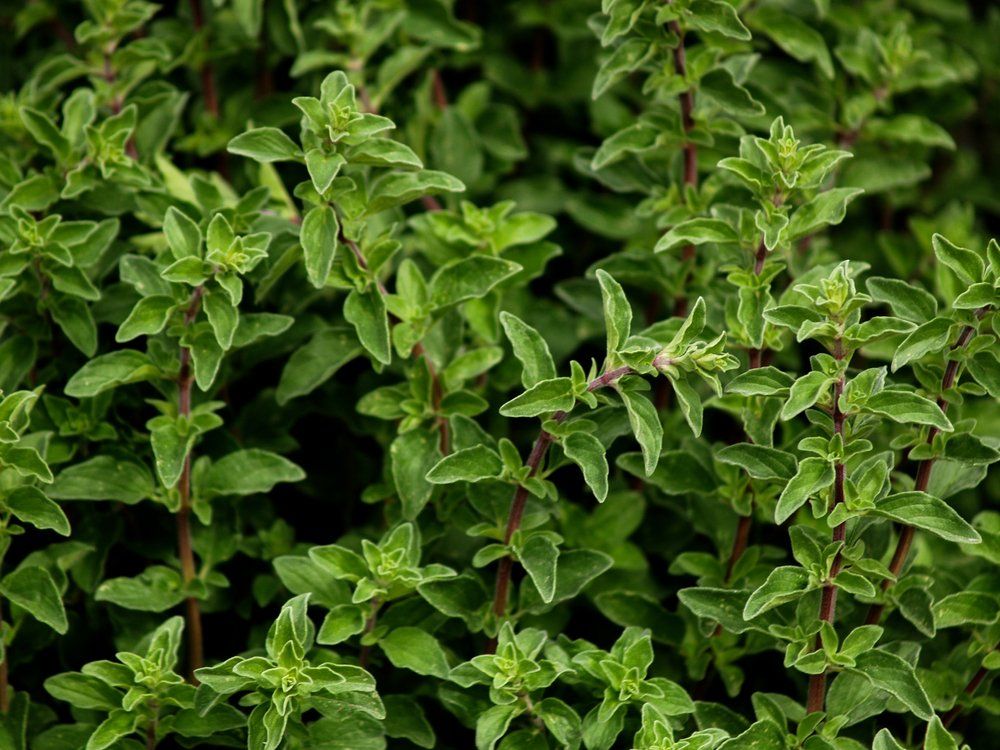 Although native to the Mediterranean and other hot and dry parts of the world, oregano is surprisingly adaptable when it comes to growing conditions.

A sunny site is best, but oregano will tolerate partial shade too. Likewise, it prefers soil that’s on the drier side, but will continue growing happily through periods of heavy rain.

Oregano is considered to be a cold-hardy herb. If well-established, and also well-mulched, oregano will often stay green in temperatures as low as -12ºC. Anything lower than this will cause the plant to go dormant, but it will burst back into life again in the spring!

Oregano gets on well with all other plants, making this a herb that you could easily dot through your garden. Whether you plant it in pots, a vegetable bed, underneath trees, or incorporate it into your borders and flowerbeds, this low-maintenance plant is great for adding a fragrant and textural dimension to your growing area.

How to Grow Oregano from Seed 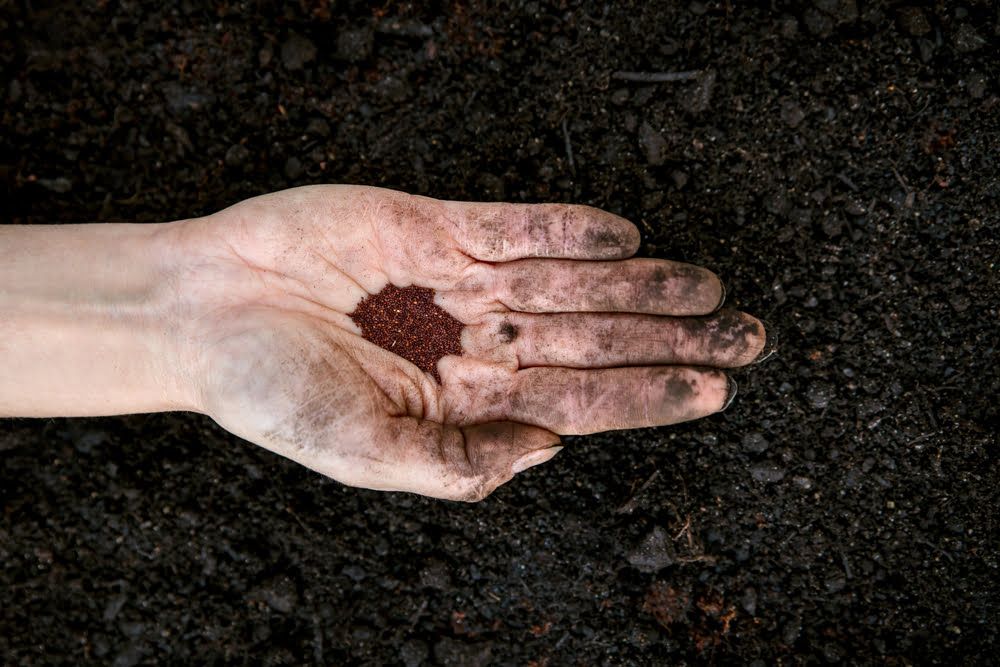 You can begin growing oregano seed from as early on as February. However, keep in mind that you won’t be able to plant your oregano out until all risk of frost has passed. The earlier you sow it, the longer you’ll have to care for those seedlings/small plants.

Just like most other plants, oregano does best when started off in modules or small pots, rather than in larger trays. This means less root disturbance when you come to transplant them later on.

Fill your modules with a seed starting mix and then give the soil some water. Then, scatter your seeds as evenly as possible over the surface of your soil. Oregano seeds are absolutely tiny – almost like dust – so this process is definitely easier said than done!

Don’t cover your seeds over once you’ve sown them. Instead, give them a light mist with some water, cover the pots with a plastic lid, and place in a warm location.

Like all herbs, oregano germinates best when the seeds are kept at a consistent temperature of around 21°C. At these conditions, your oregano will germinate in about two weeks.

Remove the plastic lid once your seeds have sprouted.

If you would prefer to skip the seed-sowing process but don’t want to splash out on larger, container-grown plants, another option would be to grow oregano from cuttings.

Aim for stem cuttings that are about 10cm long, making sure that you only ever propagate from healthy plants.

Remove the leaves from the bottom half of each cutting and then place them in a jar of water. Replace the water every couple of days, and, after a few weeks, you’ll see that your cuttings have started to grow roots.

Wait until the roots are a few centimetres long and then plant your cuttings into pots of quality compost. Grow on as you would seedlings.

Just like the mature plants, oregano seedlings are easy to look after.

They prefer to be on the dry side, so although you’ll need to keep them watered, don’t give them too much. However, don’t ever allow the soil to completely dry out either.

The area where most people struggle is when it comes to light. Oregano seedlings love the sun. If you’re growing them on a windowsill at home, you’ll notice that they start to lean towards the light. This can turn them leggy, which weakens the overall plant.

To prevent this, regularly rotate the pots so that all parts of the plant are exposed to the light source. Placing light-reflecting surfaces, such as mirrors or tin foil sheets, behind your plants will also help to bounce light around from more angles.

How to Plant Oregano Outside 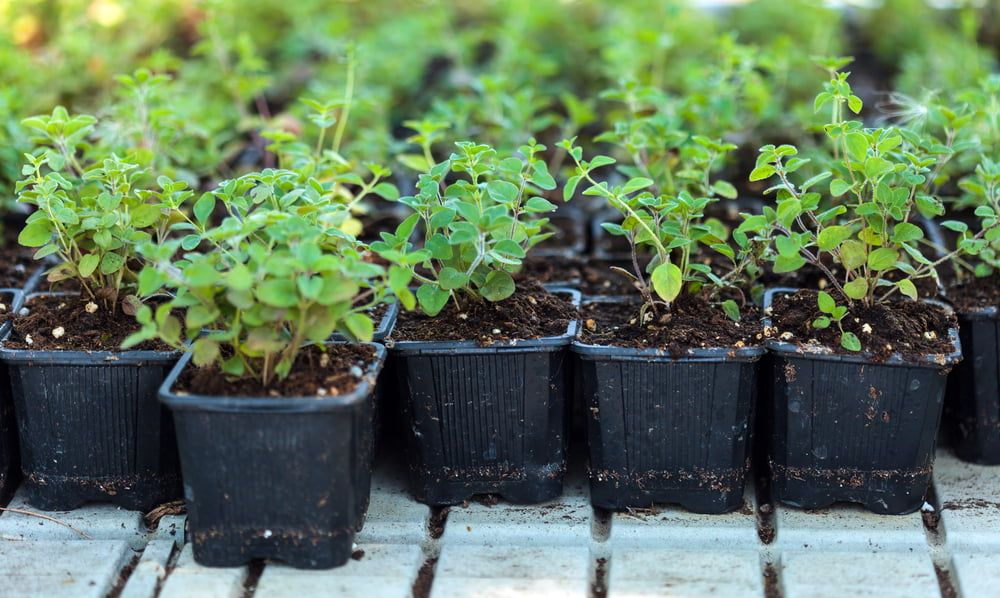 Once all risk of frost has passed, you can plant your oregano outside.

Oregano tolerates most soil types, but does best in a rich and fertile soil. Giving your oregano better soil to begin with will also mean that you won’t need to fertilize your plants as they grow.

If necessary, amend your planting area with quality compost, before digging small holes that are just large enough to accommodate the root balls of your oregano plants. Aim to have between 20-25cm of space between each oregano plant.

Cover the roots of your plants back over and firm down the soil, before giving your plants some water.

How to Plant Oregano in a Greenhouse

Oregano is hardy enough to grow in abundance outside, but you’ll end up with an even bigger and better crop if you grow it in a greenhouse.

If you’re planting in raised beds or beds that are in the ground, follow the steps for planting oregano outside.

If you’re planning on keeping your oregano in smaller containers, then look for pots that are at least 30cm in diameter. Fill your pots with a quality compost, place your oregano plants in, and then cover over with more compost. Firm the soil down before watering.

How to Care for Oregano

Being cold-tolerant, heat-tolerant, and drought-tolerant means that oregano is exceptionally easy to care for.

You don’t need to fertilise it, although you may want to add a slow-release fertiliser each spring if your oregano is growing in small pots. It would also be a good idea to repot your oregano every year or two.

You also don’t need to water it much. Simply leave it to do its thing and you’ll have an endless supply of fragrant leaves to pick!

An oregano plant can live for several years, continuing to produce aromatic leaves and flowers throughout this time. However, after about three or four years, the plant starts to turn woody, which means that it also becomes less flavourful. For this reason, sowing new oregano seeds or taking cuttings from your existing plants every couple of years is always advised.

How to Harvest Oregano 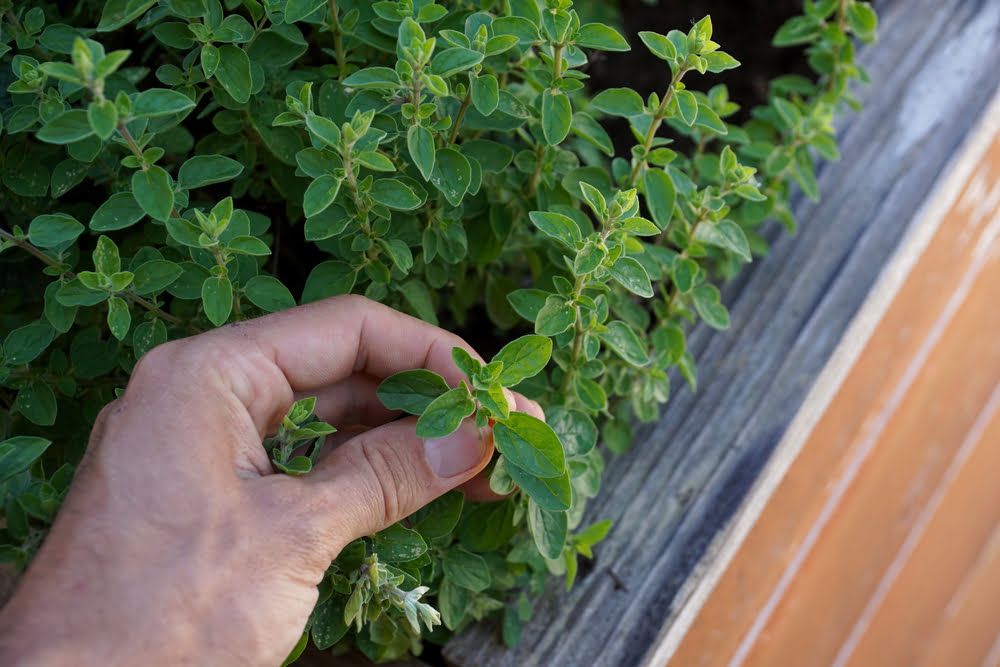 Once your oregano plants are about 10cm tall, you can begin harvesting them. Simply snip off fresh leaves as and when needed.

For a larger harvest, wait until early summer. As soon as you notice flower buds starting to form on your plants, you should harvest them. This is the stage at which oregano leaves are at their most fragrant.

To harvest your oregano, simply snip off the stems that you need. Don’t worry about over-clipping – oregano actually does best when cut back in the summer, and your harvest should coincide with this!

How to Store Oregano

If you’re lucky, your freshly-picked oregano will keep in the fridge for up to a week. However, you’ll notice that the flavour of the leaves isn’t quite as intense the longer you wait to eat them.

One of the best options for long-term oregano storage, without sacrificing flavour, is drying. The drying process actually intensifies the flavour of the herb, and it can easily be used in so many different dishes.

There are several different methods out there for drying oregano, but the simplest are:

Crumble off dried leaves from the stems and pick out any debris. Then, place your dried oregano in an air-tight container and store in a dark and dry location.

Dried oregano will be at its best for six months after it has been dried. It will last for much longer than this, but will lose some of its fragrance and flavour.

How to Prepare & Cook Oregano 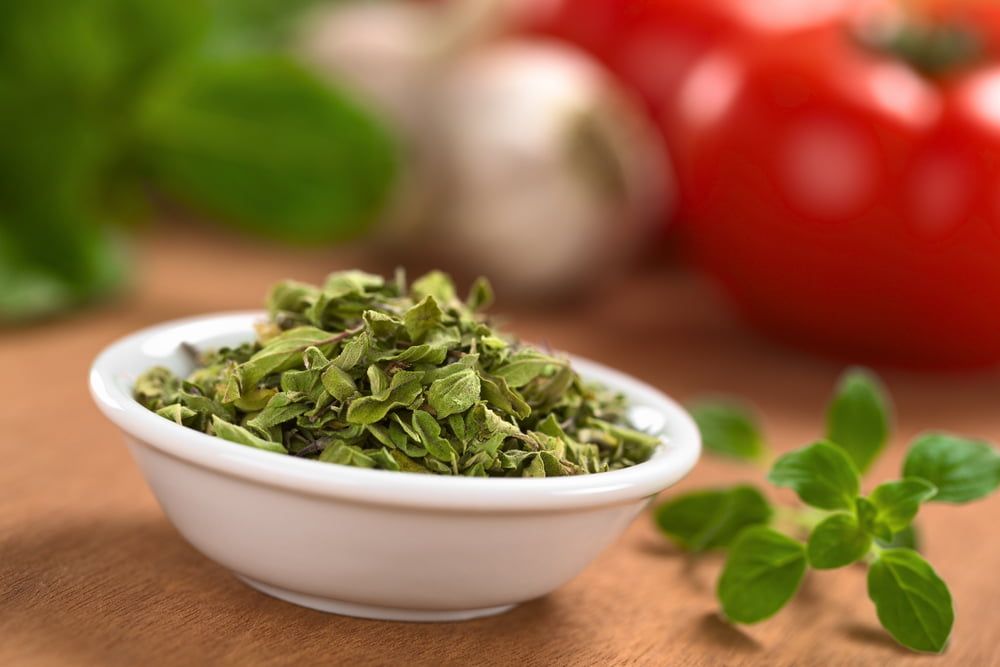 The only preparation method needed for fresh oregano is to give your clipped stems a wash and then remove the leaves from the stems. This can often be done by simply running your hand upwards along the stem, pulling off the leaves as you go.

You can then either chop or slice the leaves, or use them whole.

Some herb stems can be eaten, but the woodiness of oregano stems means that they don’t taste great. The exception to this would be with very young stems – if they easily snap, then they’ll be tender enough to eat!

Oregano can be used in the kitchen in so many ways. From sauces and marinades to doughs, salads, and infused oils, your options truly are endless.

Oregano usually manages to keep itself free of pests and diseases.

Greenhouse-grown oregano plants may experience aphid infestations, but these are rare – the bugs usually favour other plants. If you do happen to notice the tiny pests clustering on your oregano leaves, a blast of water is sometimes enough to knock them off. If this doesn’t work, try a homemade spray using neem oil, soapy water, or garlic.

Some of the most popular varieties of oregano to grow are:

Not only is oregano a visually beautiful plant that produces scented, bee-friendly flowers each summer, but this herb on its own has the potential to truly transform the food that you cook. Even better, it’s easy to grow and requires very little maintenance – once you’ve managed to establish a few oregano plants, you’ll have a steady supply of fresh leaves for the next several years!