A member of the Chinese cabbage family, pak choi goes by a few different names; bok choy, Chinese celery cabbage, horse’s ear, and more. Whatever you choose to call it, this leafy green, which is a traditional ingredient in many Asian cultures, is packed with nutrients, has a deliciously crunchy texture, and is surprisingly easy to grow.

When to Plant – Apr-Sep

When to Harvest – May-Oct

How to Grow Pak Choi at Home 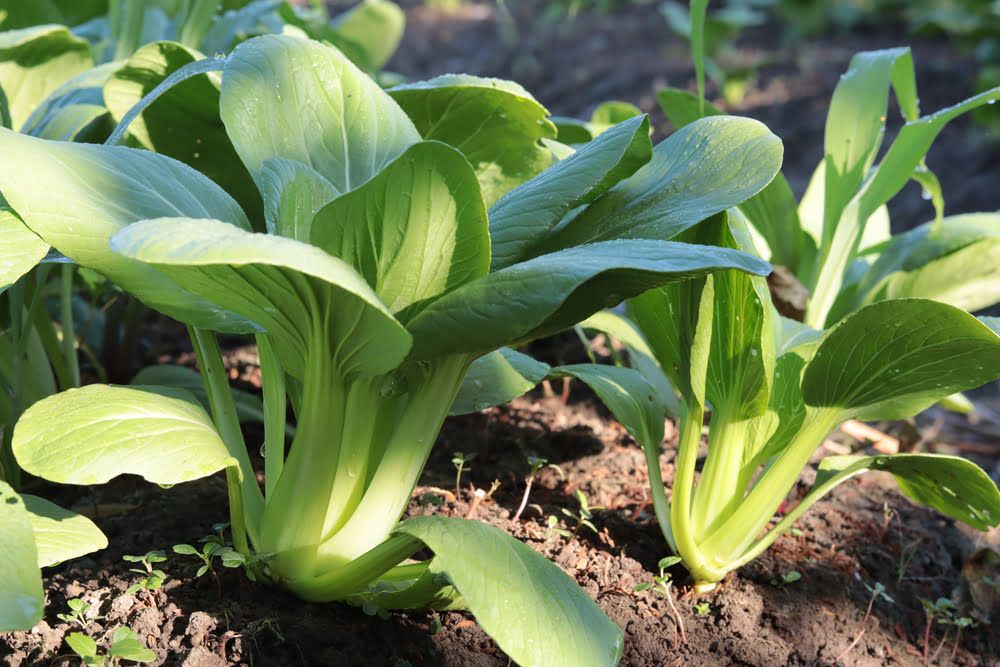 If you’re a fan of brassicas, then you’ll love pak choi. It’s hardier and easier to grow than many other leafy greens – time your sowings right and you could be harvesting this crop for at least six months of the year.

If you live in a cooler part of the world, then your pak choi will appreciate a location that offers full sun. However, too much sun can cause the plants to bolt before they’ve matured. Even if you get lucky and yours don’t bolt in the sun, all of that extra heat will affect the flavour of those leaves. This is why those in warmer areas are advised to give their pak choi plants a little shade, especially during the intense heat of the afternoons.

In terms of soil, go for something rich and moisture-retentive, yet well-draining. You can achieve this by adding some well-rotted animal manure to your growing area a few months (or even weeks) before planting.

When it comes to size, pak choi doesn’t grow too large. It’s much smaller than traditional cabbages, making it a great crop for those who are limited on space.

How to Grow Pak Choi from Seed 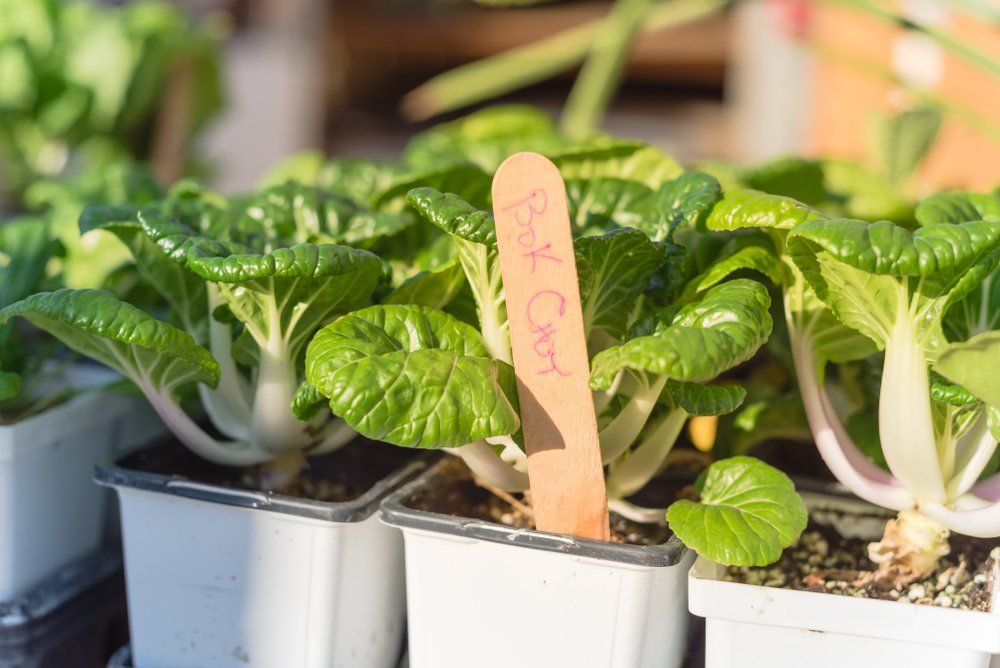 Pak choi is quite a fast-grower. Sow it directly outside once the weather warms up in the spring and you could be harvesting baby leaves in just over a month. The only downside to this is that slugs love pak choi seedlings – they’ll often decimate them overnight, before you’ve even had the chance to see your new sprouts.

The best way to get around this, while also enjoying an earlier harvest, is to start your seeds off in modules indoors before transplanting your seedlings outside.

How to Sow Pak Choi Seeds in Modules:

It should take about five to eight days for your pak choi seeds to germinate. Once they do, move them to a bright spot in your home and keep your seedlings moist. After about a week, thin them out so that there’s just one seedling in each module. This isn’t strictly necessary if you only want to harvest individual leaves, but they’ll need to be thinned if you’re hoping for large heads.

Once your seeds germinate (which, again, should take between five to eight days), give them a week or so to grow on before thinning them out. Aim to leave about 30cm between each plant. The thinning out process can also be done gradually as the plants grow. You can then eat those larger thinnings.

How to Plant Pak Choi Outside 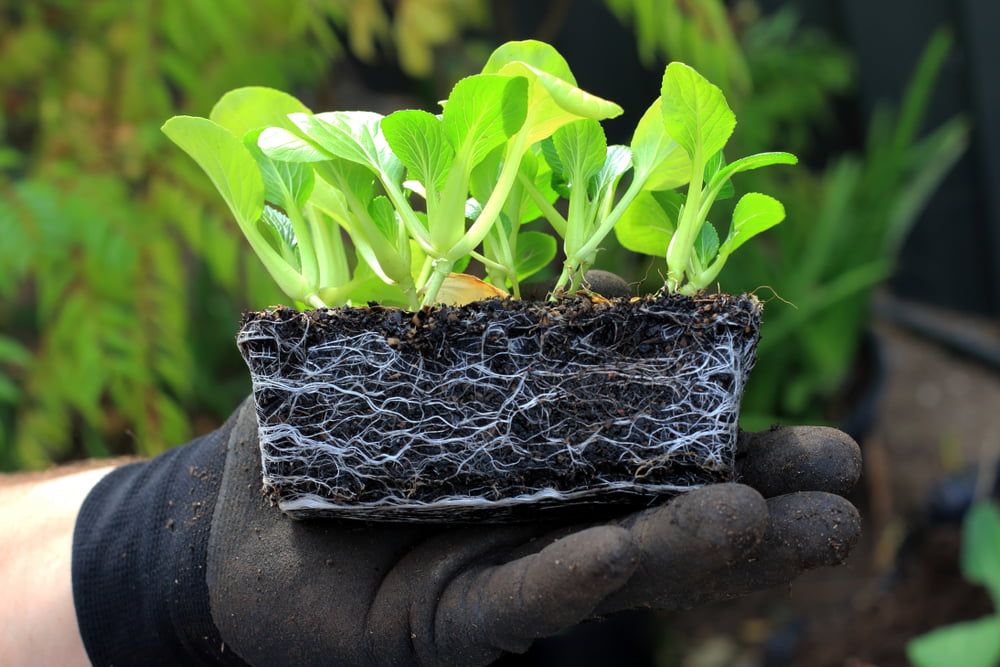 Once you’ve had your last spring frost, you can move your pak choi seedlings outside. Ideally, they should be at least 5cm tall by this stage.

However, before planting your pak choi seedlings out, give them a week to ten days to harden off. This will help to prevent transplant shock, allowing them to establish faster.

Before planting, make sure that you have weeded your growing area. Then, dig small holes in the ground, just slightly larger than the root balls of your seedlings. Space each hole at least 30cm apart.

Gently remove your seedlings from their modules and place them into their new homes. Cover the roots over with soil and firm down. Pak choi does best in a firmer soil. Then, give your plants some water and watch them grow!

How to Plant Pak Choi in a Greenhouse

Pak choi does well in a greenhouse, but you’ll need to get your timings right. As mentioned, too much heat won’t do your plants any favours. This means that any plants maturing in mid-summer should definitely be outside.

However, sowing some seeds in early spring will give you a late spring harvest in your greenhouse, long before your outdoor sown plants are ready. You can then sow more seeds in mid-summer for a late autumn harvest.

How to Care for Pak Choi 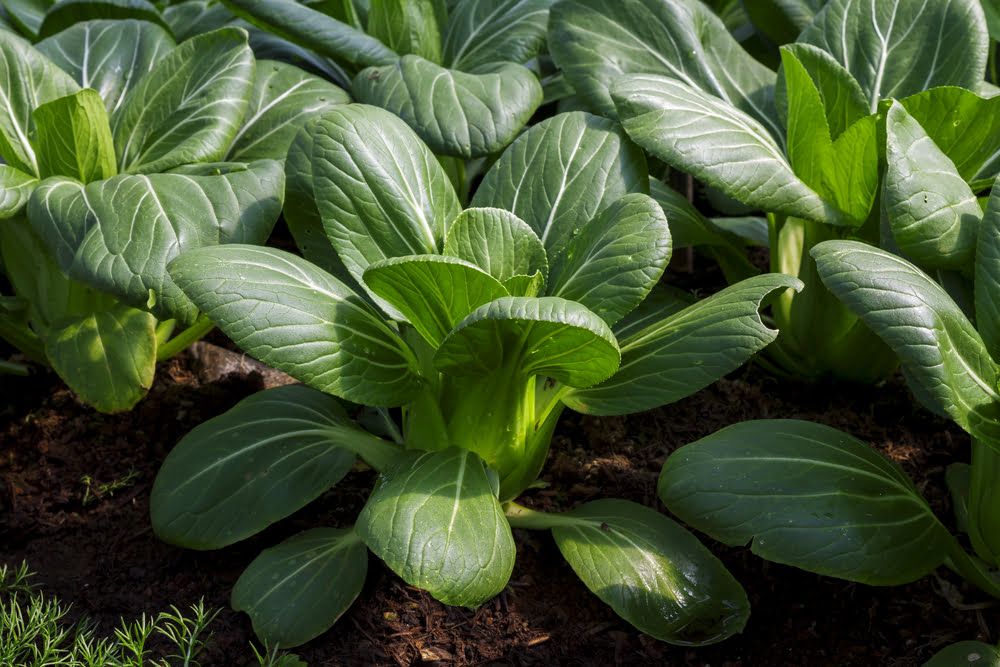 Many brassicas have a reputation of being tricky to care for, but pak choi isn’t one of them. Granted, it does need a little bit of attention, but provide the basics and you’ll be harvesting healthy plants in just a couple of months’ time.

Pak choi needs its soil to be consistently moist. Allow it to dry out and your plants will likely bolt before you’ve had the chance to harvest them. Dry soil can also turn your plants bitter and tough, making it worth keeping them well-watered.

This usually means giving them some water every two to three days. Of course, pak choi growing in a greenhouse will need to be watered more often, even daily. Recommended amounts are 2.5cm of water a week in standard conditions, or 5cm a week during hot spells.

Pak choi is a heavy feeder. Giving your plants an organic, slow-release fertiliser soon after they have been planted out will help to boost their growth. If your soil was of good quality, this may be all your plants will need. However, for pak choi growing in poor soil, another fertiliser application about a month after planting can be beneficial.

Weeds can quickly smother out pak choi plants, making it vital to keep your growing area weed-free. One way to make this easier is to mulch your pak choi plants. Use an organic mulch, as this will also help to feed your plants as it breaks down. Another benefit of mulching is that it will help to keep those roots cool and moist, which will prevent your plants from bolting.

How to Harvest Pak Choi 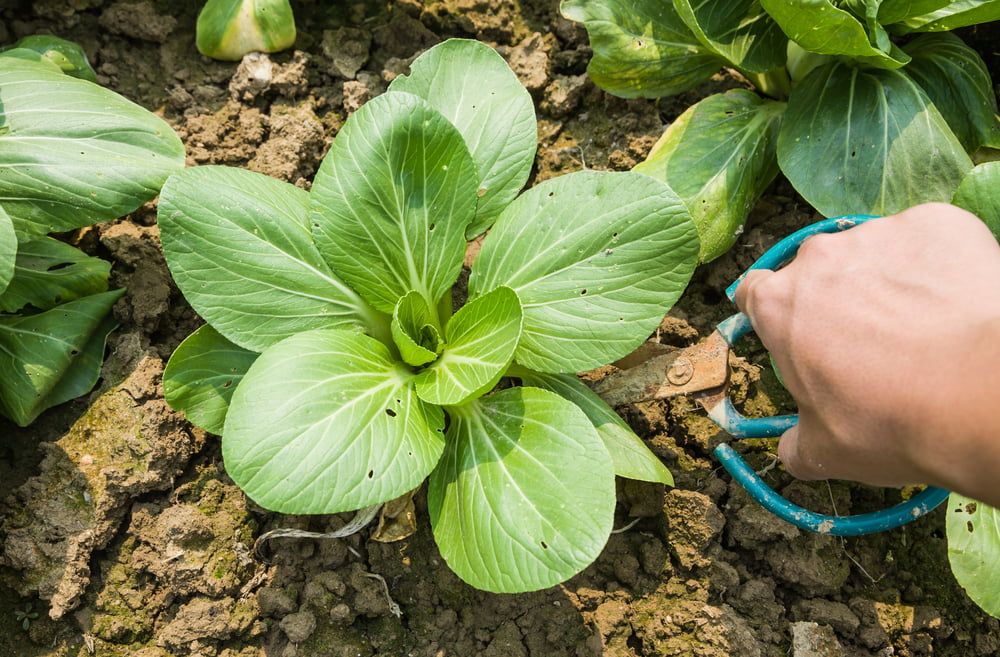 Once your pak choi plants are about a month old, you can start to harvest baby leaves, picking them off as and when you need them. These make for a great addition to a salad.

Alternatively, wait a little longer and your plants will start to form a “heart”. At this point, you can harvest the entire plant by using a sharp knife to cut the plant off at its base. Leave the roots in the ground – if you’re lucky, your plants may start to produce a second head.

How to Store Pak Choi

Freshly-harvested pak choi can be kept in the fridge for about a week.

If long-term storage is what you’re after, then freezing your pak choi would be the best option. Most choose to blanch the plants first. Although not strictly necessary, this extra step does help to preserve colour. Once frozen, your pak choi will be good to use for about one year.

Other preservation methods that work well for pak choi are:

How to Prepare & Cook Pak Choi 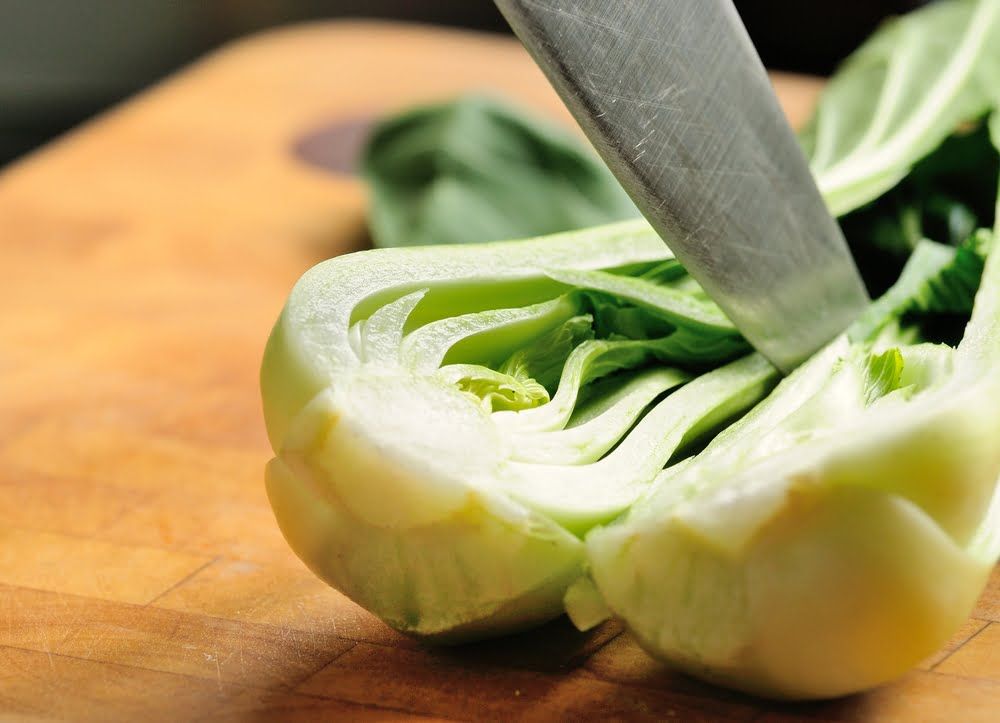 Even if your pak choi plants look clean, it would be a good idea to give them a wash first. Grit can often end up caught between the stems and leaves, which you don’t want to be eating.

To clean your pak choi, place the plants into a bowl of cold water. Use your hands to swirl the plants around, allowing the water to enter in between the leaves and stems. Then, give them a rinse before leaving them to drain and dry.

You can then either tear off the individual stalks to cook, or chop each plant up. The method that you choose will depend on how you plan on cooking your pak choi. Stir-fries tend to be the most popular option, but if you want to get a little more creative, try some of the following dishes:

Compared to other brassicas, pak choi isn’t quite as susceptible to pests and diseases. That said, you may still encounter some of the following issues: 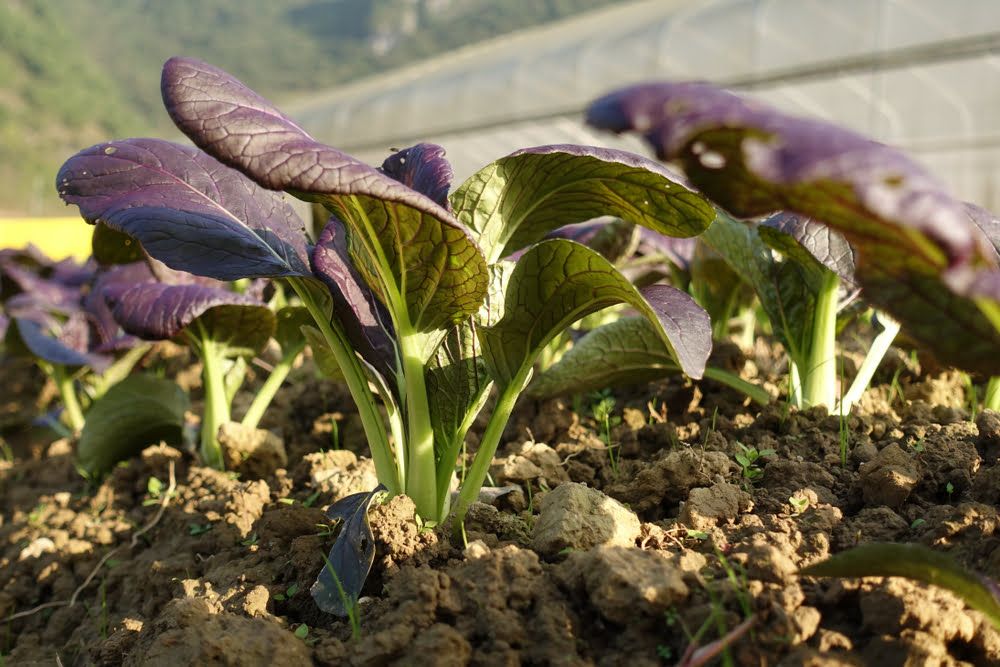 There are numerous pak choi varieties out there. Try a few different ones if possible – this will help you to determine which do best in the growing conditions that your garden offers.

Not only is pak choi an incredibly tasty and versatile vegetable, but it’s also such an easy one to grow. You’ll be able to start harvesting your plants just a month or so after sowing, with this being a crop that could potentially feed you for a large portion of the year.