A fast-growing cool-weather crop, spinach is considered to be a superfood because it’s packed with vitamins, antioxidants, and anti-inflammatory compounds. Regularly eating this leafy green can do wonders for your health, but, let’s face it, a bag of supermarket spinach never goes very far. The best way to really benefit from this vegetable is by growing it yourself – time things right and you could be harvesting fresh spinach throughout the year.

When to Harvest – Apr-Mar

How to Grow Spinach at Home 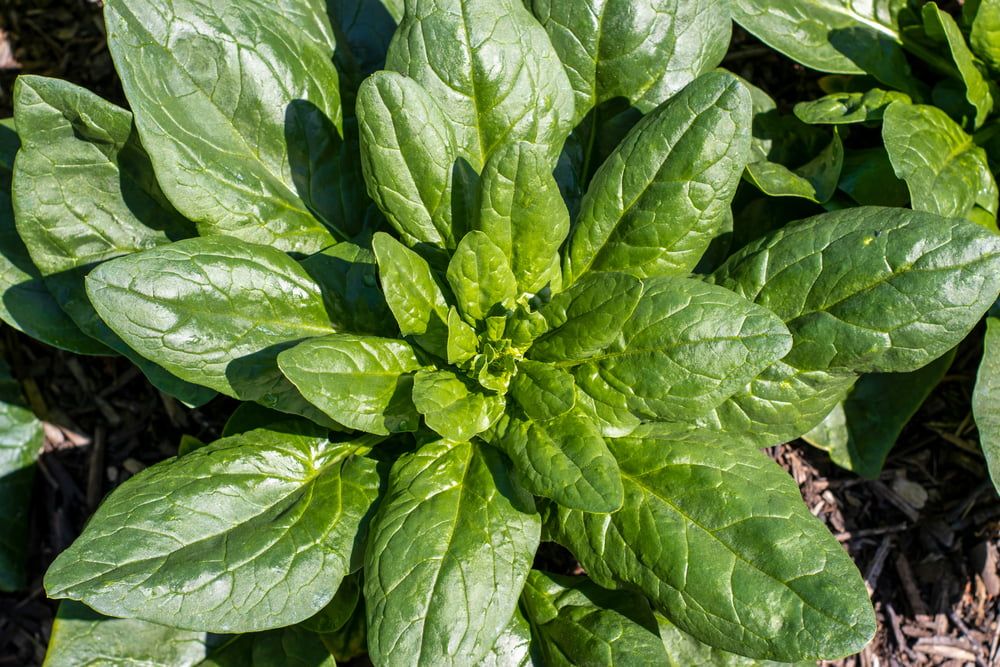 All spinach plants fall into one of these two categories:

Both types have similar growing requirements. The main difference is that slow-growing spinach varieties are more tolerant of heat, while fast-growing varieties do better in cooler temperatures.

If you grow a selection of both types and are able to match their growing requirements, then you’ll be able to enjoy year-round harvests.

When growing spinach at home, the most important thing to remember is that this vegetable thrives in cool conditions. Although full sun is important, you’ll need to choose a growing area that protects the plants from the midday sun in the summer. Too much heat causes spinach to bolt, turning the leaves tough and bitter.

In terms of soil, spinach does best in a rich, moisture-retentive mix. Spinach taproots run deep, sometimes over two metres long, so mix a good amount of quality compost into your growing area before getting started.

One spinach plant on its own isn’t going to give you a long harvesting period. This is why successional sowing is so popular with leafy greens.

All this means is sowing a new batch of seed every two weeks. Start doing this with slow-growing varieties in early spring, take a break mid-summer, and then continue again in the autumn, switching to fast-growing varieties.

How to Grow Spinach from Seed 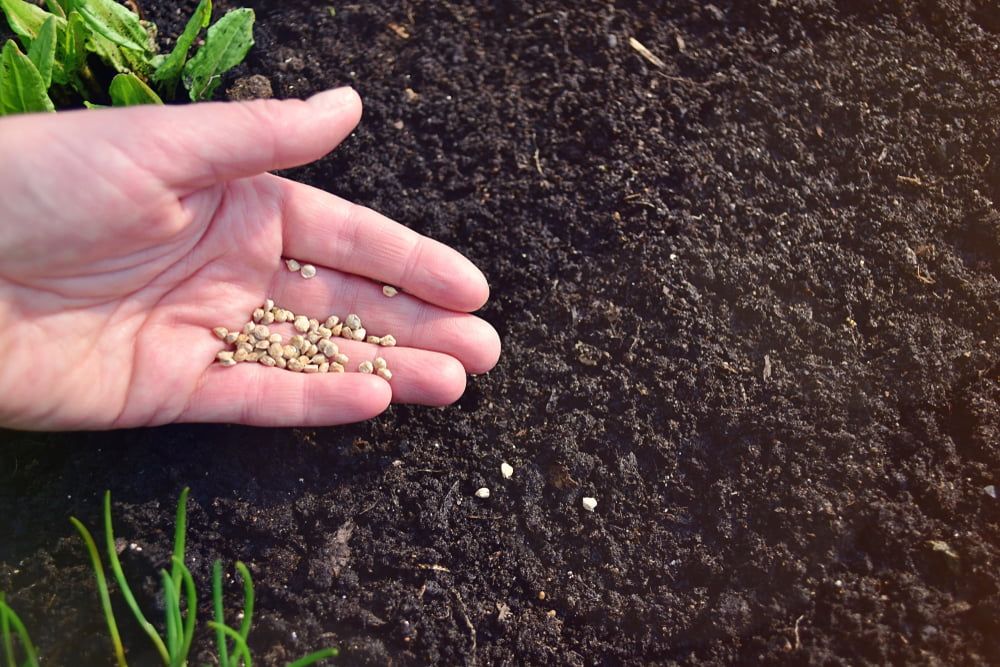 Spinach grows well when direct sown. This can be done up to six weeks before your last frost, so long as your ground isn’t frozen. However, for an earlier harvest, sow your spinach seeds under cover and then transplant them to their final location once they’ve had a good start.

Here’s how to sow your spinach seeds in modules:

Spinach seeds germinate best at temperatures of around 15°C. That being said, consistency is also important. You can go as low as 10°C or as high as 20°C, so long as you keep the temperature stable.

The seeds will germinate in about ten days. Give seedlings plenty of light, along with enough water to prevent their soil from running dry.

Every plant does better when it doesn’t have to deal with its roots being disturbed. For this reason, once temperatures warm up slightly in the early spring, many choose to direct sow their spinach instead of starting their seeds off under cover.

Here’s how to do this:

Once your seedings have grown a pair of leaves, thin them out so that there’s at least 10cm of space between each plant. Try to keep the healthiest seedlings, and don’t forget that you can eat your thinnings!

How to Plant Spinach Outside 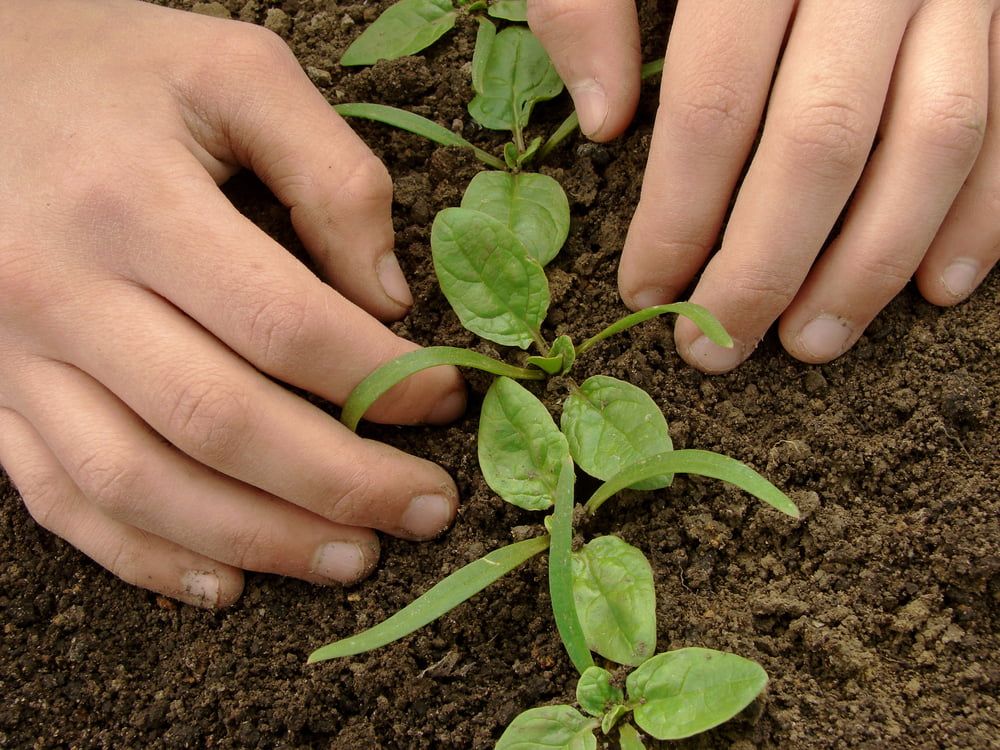 Once the spinach plants that you started under cover are about 5cm in height and have a few sets of true leaves, they’re ready to move outside.

Harden them off for a week or two first, using this time to prepare your planting bed.

Then, create holes in the ground that are large enough to accommodate each spinach plant. Space the holes about 15cm apart. Place your plants in, cover back over with soil, and water well.

How to Plant Spinach in a Greenhouse

Spinach grows fantastically in a greenhouse in the early spring and winter. However, as soon as temperatures rise, greenhouse spinach will bolt very quickly, making slow-bolting varieties key.

If your greenhouse beds are in the ground or are large raised beds, then follow the same steps as when planting outside.

Alternatively, grow your spinach in containers instead. The deeper the container, the better, although a minimum depth of 15cm is essential. Again, try to keep plants between 10-15cm apart. If they’re overcrowded, they’ll end up bolting sooner.

How to Care for Spinach 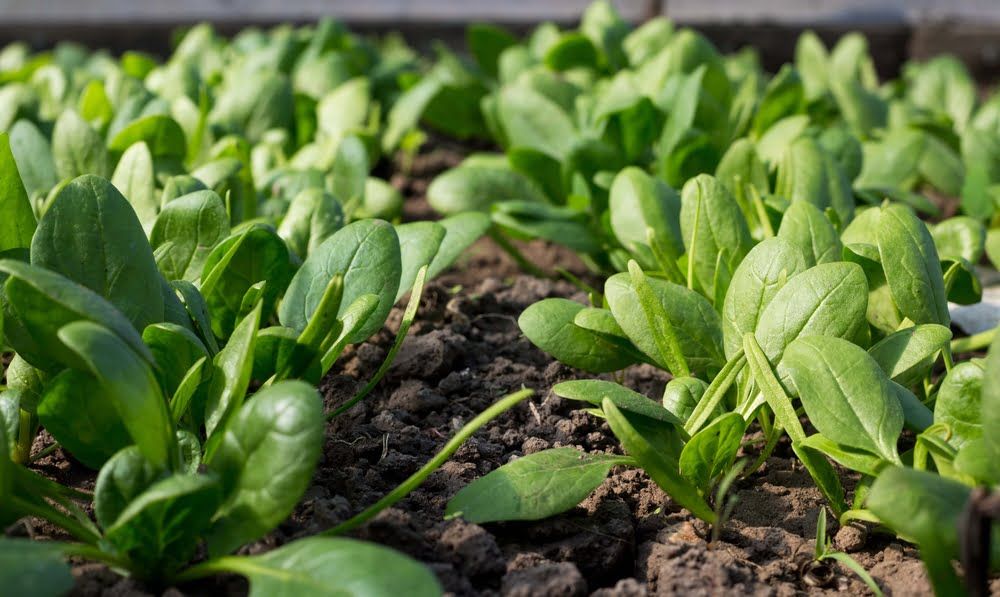 If you prepare your planting bed correctly and are growing your spinach outside, then your plants will require very little care as they grow. Keep an eye on them to ensure that all of their needs are met, and you’ll be enjoying your first harvest before you know it.

Although they hate waterlogged soil, spinach plants need a regular supply of water. An average of 3cm of water a week is ideal, which the rain often provides in the spring and autumn.

Manual watering is only necessary during hot and dry spells. However, keep in mind that a few light watering sessions a week will be far more beneficial to your spinach plants than one deep soak.

Being a leafy green means that spinach needs plenty of nitrogen. Feeding your plants isn’t necessary, but will give you a much bigger and longer harvest.

If you decide to fertilise, use a nitrogen-rich fertiliser. Apply this to your growing area before planting, and then every two to three weeks after.

Although mature spinach plants usually smother out any weeds that pop up around them, they need help getting to this stage. Weeds will quickly overtake young plants, but this can be avoided by thoroughly weeding your growing area before planting.

How to Harvest Spinach 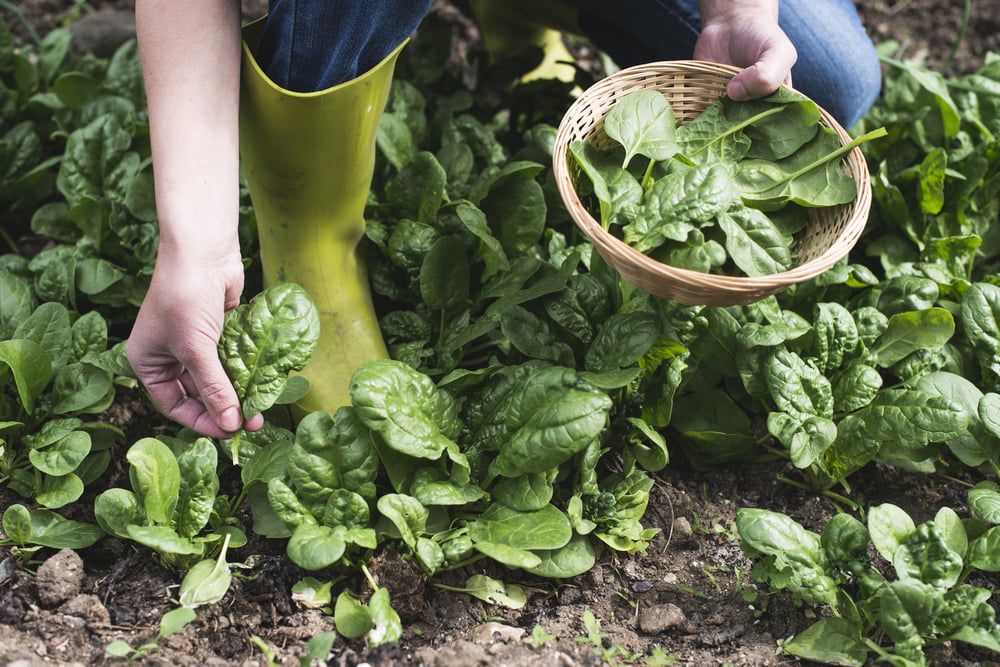 Spinach is usually ready to be harvested about six weeks after germination.

Don’t wait for your plants to get too large – start harvesting baby leaves once they reach about 8cm in length.

Snip or pluck off individual outer leaves as needed. However, don’t let them remain full-sized for more than a week, or their flavour will start to decline.

Once a spinach plant starts to show signs of bolting, then it’s time for the entire plant to be harvested. Use a sharp knife to cut the plant at its main stem. You can then pick off individual leaves.

How to Store Spinach

When you’re harvesting individual leaves, you won’t have a huge amount to store. Spinach starts to loses its nutrients immediately after being picked, so it’s always best to use it as soon as possible.

If you do happen to pick a little more than you need, wrap the leaves in paper towels, place them into a perforated plastic bag, and then put the bag in the fridge. Your spinach will last for about a week this way.

Of course, once it’s time to harvest the whole plant, you’ll be dealing with an abundance of spinach.

The best long-term storage option would be to freeze the leaves. Blanching them first will allow them to store for up to one year, while un-blanched spinach stays good for about six months.

How to Prepare & Cook Spinach 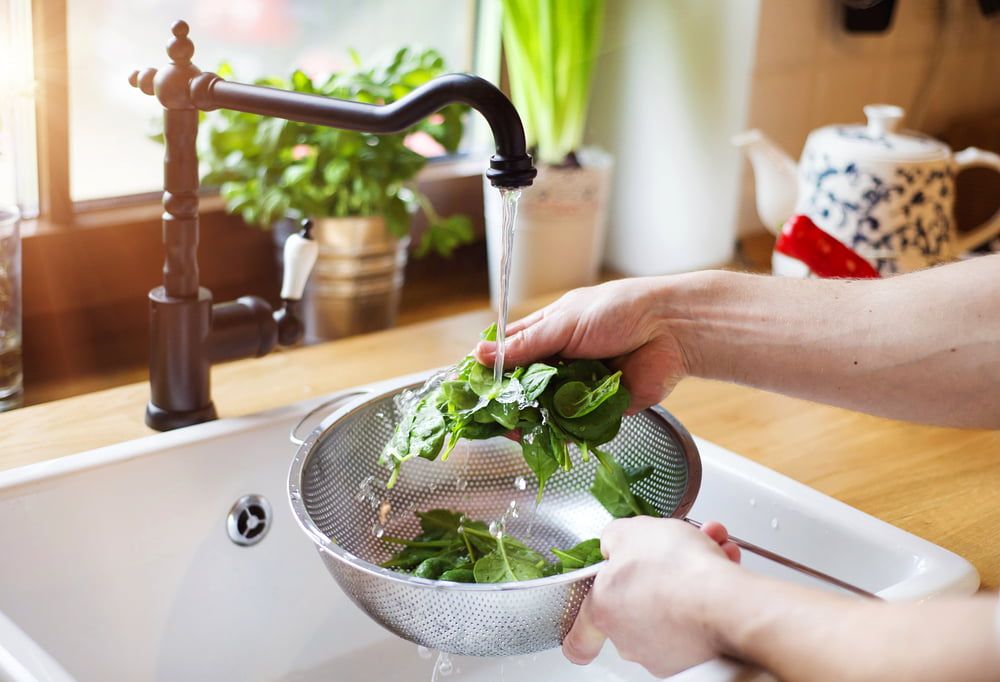 Spinach doesn’t need much preparation. The best way to wash the leaves is by placing them into a colander or a basin, before swirling them around in cold water. Then, drain and repeat.

Young leaves are beautifully tender, and the whole leaf can be eaten. However, older leaves can turn a little fibrous at the stem, so you may want to tear the tender leaf parts off before using.

Most vegetables are better for you when eaten raw, but spinach is a little different…

While certain nutrients, such as vitamin C and niacin, are available in higher amounts in raw spinach, cooking the leaves makes other nutrients, including vitamin A and iron, more bio-available. So, ideally, include a mix of both raw and cooked spinach leaves in your diet.

Raw leaves work well in salads, sandwiches, burgers, and as a simple side to other main dishes. Blitzing raw spinach into a green smoothie is another popular way to consume the leaves in raw form.

When cooking spinach, don’t overcook the leaves. Whether you’re blanching, sautéing, stir-frying, or anything else, spinach leaves only take 2-4 minutes to wilt, at which point they’re ready to be eaten.

A few delicious ways to use spinach in the kitchen include:

Diseases aren’t usually a problem with spinach. Mildew is the most common, which shows as powdery white patches on leaves. Infected leaves can easily be picked off, and improving circulation around your plants will prevent more from forming. There are also mildew-resistant spinach varieties out there if this is a disease you’re often dealing with.

While you may not have to worry about spinach diseases, pests are another matter. Slugs and snails love spinach seedlings, and a full-on attack could decimate your plants. Starting them under cover and planting them out when they’re large enough to defend themselves is one way to protect your spinach plants from these pests. Alternatively, place beer traps around your plants to catch any wandering slugs and snails before they attack.

There are three main spinach varieties; Savoy, Semi-savoy, and flat-leafed. Within each variety, there are numerous cultivars, giving you the chance to grow new and exciting spinach varieties each year.

Some of the most popular varieties to grow are:

Most of the world’s spinach is currently grown in China, as well as the USA. Commercially-grown spinach also happens to be the most pesticide-laden vegetable out there. Considering how simple this leafy green is to produce, as well as how much potential it holds for keeping you healthy, it’s not surprising that more and more gardeners are now choosing to grow their own spinach at home.