How to Grow the Sweetest and Juiciest Cobs of Sweetcorn

With an incredible sweetness, juiciness, and richness that seems almost impossible, freshly-picked sweetcorn is a late-summer highlight for every gardener that grows this crop. While it used to be difficult to grow sweetcorn in cooler climates, the many new varieties available now allow gardeners from all over the world to enjoy their own sweetcorn harvest.

When to Plant – May-Jun

When to Harvest – Aug-Oct

How to Grow Sweetcorn at Home 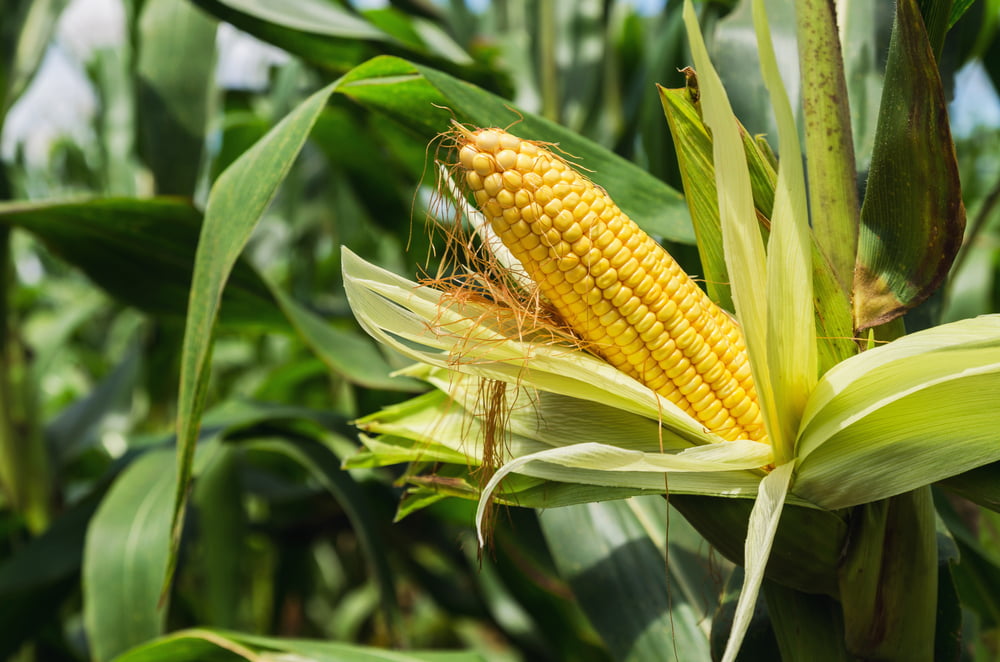 Although it does take up a fair bit of space, especially since the plants need to grow in blocks rather than rows, sweetcorn is a relatively easy crop to grow at home. One or two cobs per plant is an average yield to expect, but, give your plants the best growing conditions possible and you could very well double that, harvesting three or four cobs from each of your plants.

Sweetcorn plants thrive in the sun – at least six hours of full sunlight is needed per day in order for plants to produce cobs. In addition to light, they also require heat. Temperatures should never drop below 10°C, although keeping things consistent at around 16°C would be ideal.

Although they grow quite tall and lanky, sweetcorn plants are also quite sturdy and don’t usually need to be staked. However, they’ll need protection from strong winds, so don’t plant them in an exposed spot.

In terms of soil, go for a mix that’s well-draining yet moisture-retentive. Enriching your soil with plenty of organic matter will allow you to provide this.

How to Grow Sweetcorn from Seed 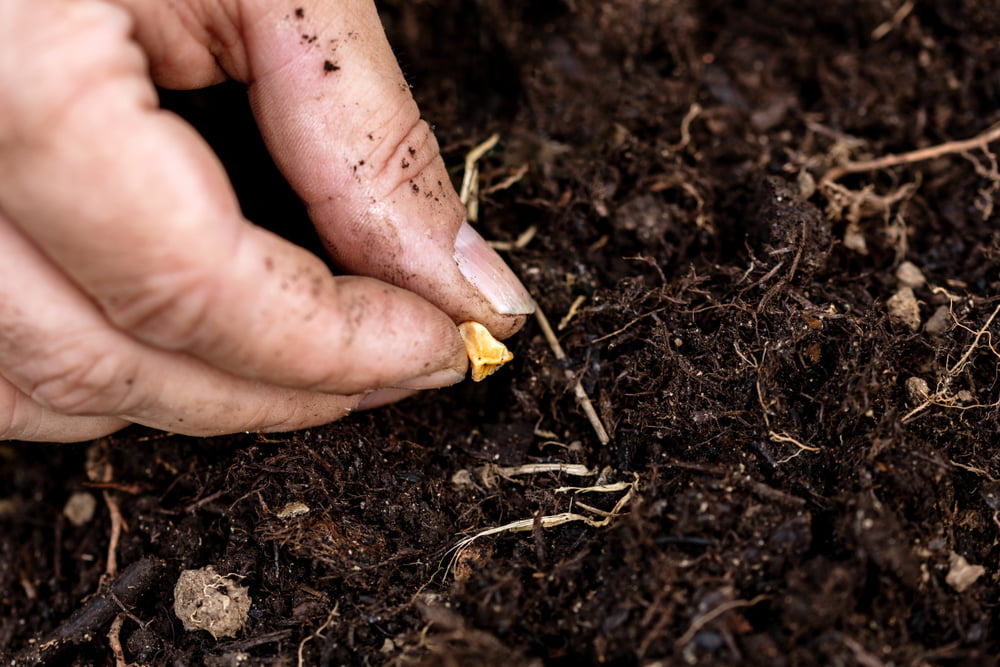 While sweetcorn grows well in warmer climates when direct sown, those who live in cooler areas usually need to start their seeds off indoors. Aim to do this about four weeks before your predicted last frost date. This gives you just the right head-start on the growing season, increasing your odds of a bigger harvest.

How Many Sweetcorn Seeds Should You Sow?

Deciding how many sweetcorn plants you need can be a little tricky. After all, you could end up with anywhere between one and four cobs per plant!

A good number to aim for is 10-15 plants per person for eating fresh, or more if you want to store some of your harvest.

To extend your growing season, aim to sow some sweetcorn seeds every two weeks for a six-week stretch. Alternatively, if you’d prefer to sow everything at the same time, then choose a mixture of early, mid-season, and late varieties.

How to Sow Sweetcorn Seeds:

Keep your seeds moist, but not too soggy, during the germination process. You’ll start to notice seedlings emerging in about 10-12 days in ideal conditions, but it could take up to three weeks. Once this happens, move your pots to somewhere bright – a sunny windowsill works well, but you’ll need to keep rotating your pots to prevent the seedlings from getting too leggy.

Depending on how fast your seedlings grow, as well as on how soon you can plant them out, you may need to repot your sweetcorn into larger containers. Don’t allow your plants to become root-bound, as this will slow their growth down.

How to Plant Sweetcorn Outside 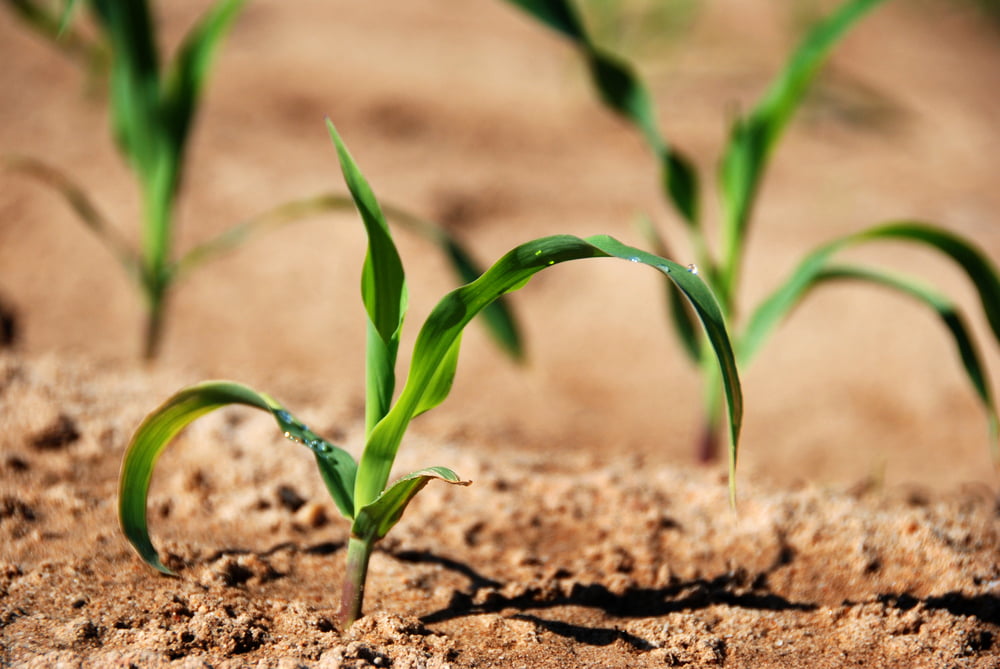 Once you’re certain that your spring frosts have finished, and temperatures have risen to above 10°C, you can start hardening off your sweetcorn plants. This will help them to adapt to outdoor conditions, preventing transplant shock when they do finally move out.

Unlike most other vegetable plants, which can be grown in rows, patches, or however else you want to grow them, sweetcorn needs to be planted in blocks. This means that they do take up a significant amount of room, but you can interplant them to maximise space (look into the “three sisters” growing technique).

The reason why sweetcorn needs to grow in blocks is to improve pollination. Rather than being pollinated by insects, sweetcorn is wind-pollinated. If those tassels aren’t near enough to each other, pollination will be lacking, resulting in several kernels missing from the cobs.

Aim for each block of sweetcorn to be at least four plants wide.

How to Plant Out Sweetcorn:

How to Plant Sweetcorn in a Greenhouse

If you live in a colder region and have the option of growing your sweetcorn in a greenhouse, then this is definitely worth doing. Your plants will love the extra heat provided by a greenhouse, meaning larger and tastier harvests.

However, there are a few downsides to greenhouse growing that you need to be aware of:

Planting sweetcorn in a greenhouse is no different from planting it outside. Again, your plants will need to grow in blocks for maximum pollination.

How to Care for Sweetcorn 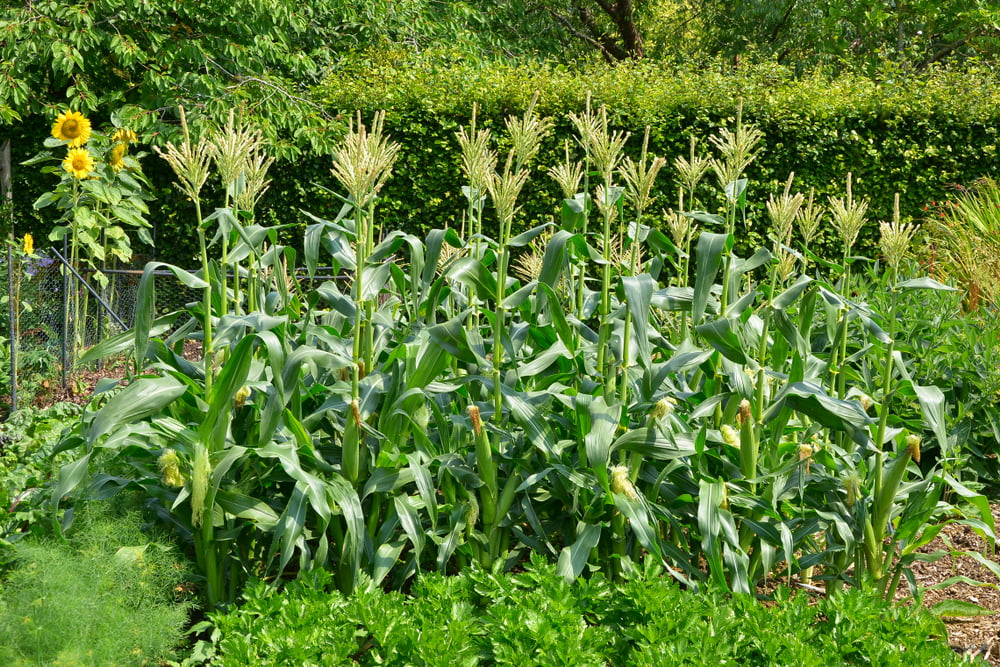 Sweetcorn is surprisingly simple to care for. Here’s what you need to do:

Sweetcorn plants need about 2.5cm of water a week, although this increases slightly once the plants produce tassels. Consistent watering is extremely important with sweetcorn to prevent water stress, which would lead to your cobs missing a large chunk of their kernels.

Sweetcorn is quite a hungry plant and will appreciate some extra feed. Start by using a nitrogen-rich fertiliser every couple of weeks after planting your sweetcorn out. After about two months, switch to a tomato feed. Again, apply this every two weeks or so, right up until you harvest your plants.

Sweetcorn plants suffer when they have to deal with competition from weeds. While those growing the crop commercially will spray their plants with a chemical weed killer, this is something that’s always best avoided when growing on a small-scale at home.

Of course, no one wants to spend hours weeding either, so consider laying a mulch around your sweetcorn plants. Not only will this help to suppress weeds, but it’ll also provide some extra protection to your plants, while keeping soil moisture levels more consistent.

How to Harvest Sweetcorn 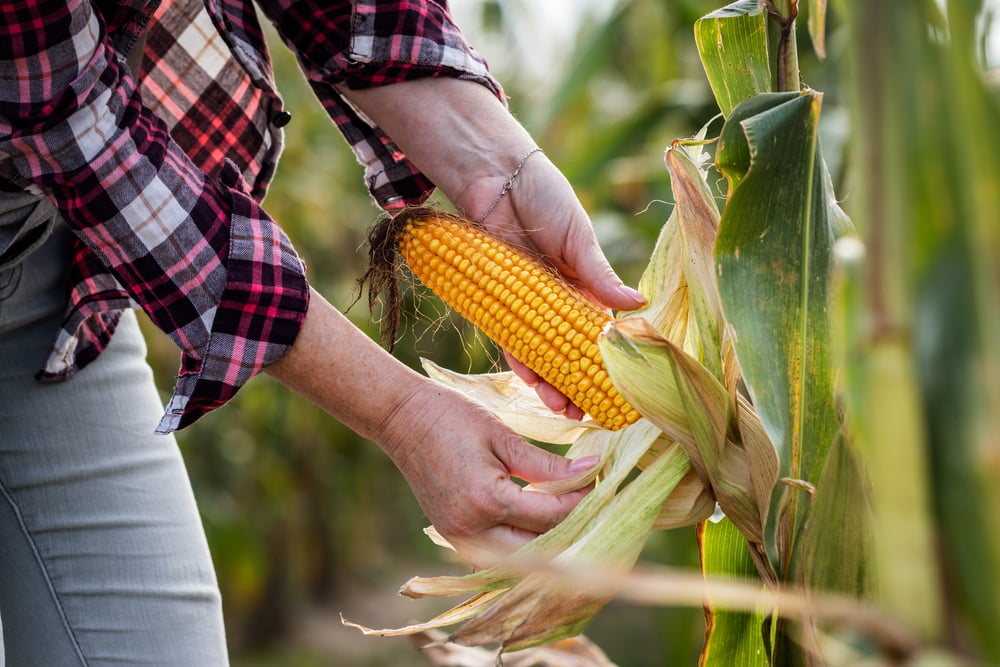 It’s not always easy to tell when sweetcorn is ready to be harvested – there’s a fine line between under-ripe and over-ripe!

It usually takes about six weeks from when the cobs first appear before they’re ready to be picked. Once the tassels on your cobs have turned brown, it’s time to test for ripeness. Here’s how:

Once your cobs are at the perfect stage of ripeness, simply hold it firmly, give it a gentle twist, and pull it off from the plant.

Try to harvest your cobs right before you plan on using them. As soon as they have been picked, all of those delicious sugars within will start to turn into starch – the sooner you eat your freshly-picked cobs, the sweeter they’ll be. In fact, many gardeners will often have a pot of water already boiling before they harvest their sweetcorn in order to really make the most of all of those natural sugars.

How to Store Sweetcorn

The key to storing sweetcorn is preventing the cobs from drying out. For short-term storage, each ear can be tightly wrapped in a plastic bag and then stored in the fridge. This way, they’ll be good to eat for about three days. After this, they’ll taste very starchy.

The best long-term storage option for sweetcorn is freezing. You’ll need to first remove the ears and silks, and then it’s up to you whether you blanch the cobs first, or freeze them as they are. You also have the option of slicing the kernels off, or leaving the cobs whole. Just to give you even more choice – you could also cook the cobs/kernels before freezing them.

When frozen, your sweetcorn should keep for up to a year. Pay extra attention to preventing freezer burn, as this will affect both the taste and the texture of your corn.

How to Prepare & Cook Sweetcorn 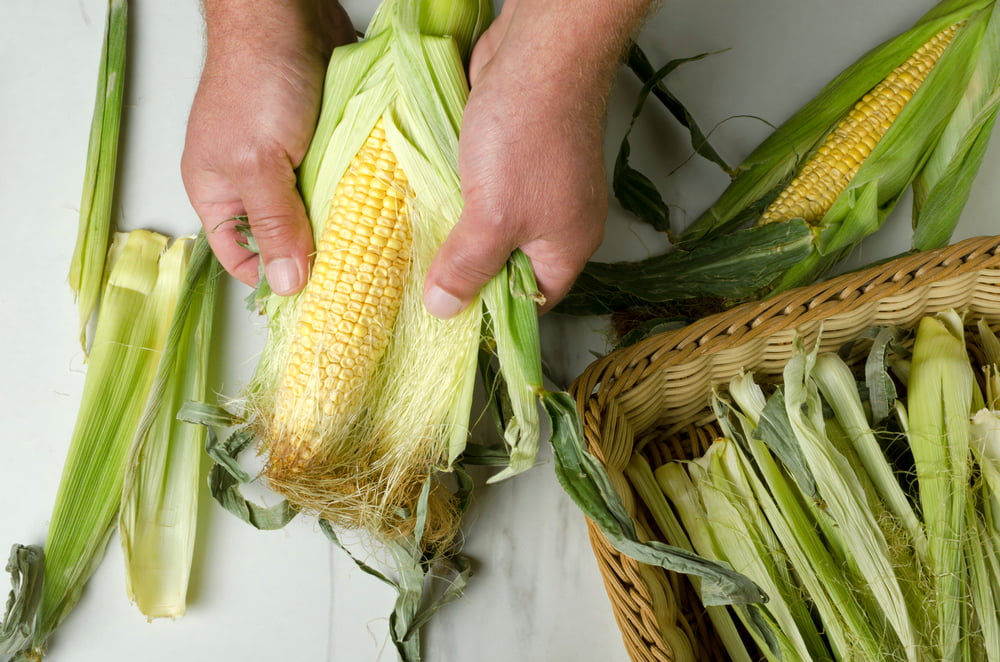 Preparation methods for sweetcorn vary depending on how you plan on using your harvest. For example, if you were planning on grilling or barbecuing your cobs, you can leave the ears on – this will help to protect the cobs from burning, while giving them a deliciously smoky flavour.

Alternatively, you can strip the ears and silks off to use the bare cobs whole, or run a knife down the cobs to slice the kernels off.

There are endless ways in which sweetcorn can be used in the kitchen, but the dishes that best showcase the flavour and texture of a fresh harvest are:

There are a few problems that you may encounter when growing sweetcorn. These will vary depending on where in the world you live, but some of the most common are as follows: 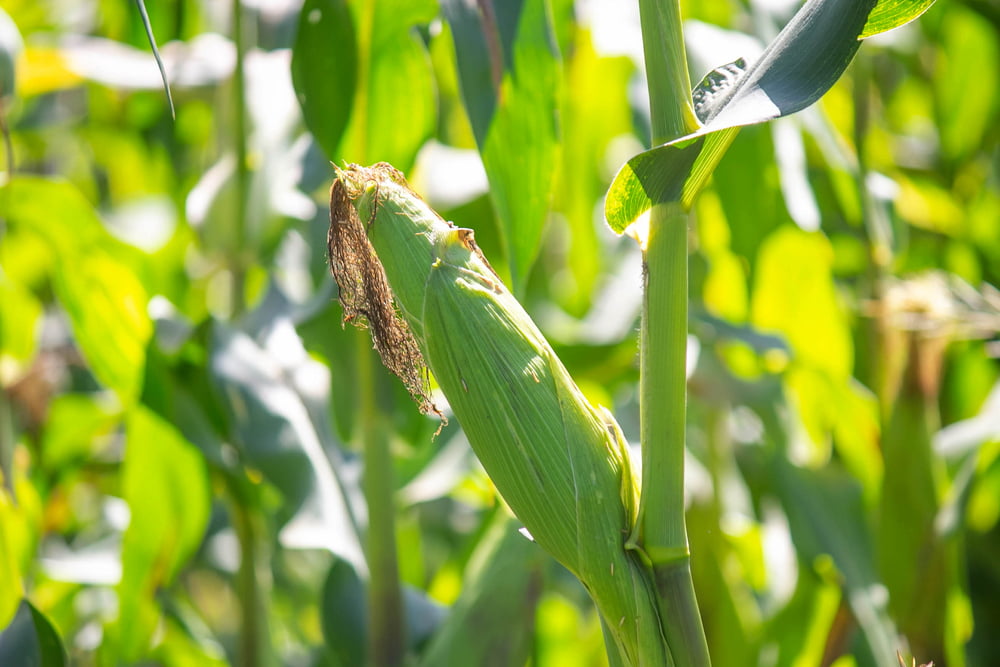 Some of the tastiest sweetcorn varieties to grow are:

If you’ve never tasted freshly-picked sweetcorn before, then you really are missing out on what many gardeners would say is the highlight of their growing season. Yes, the plants do take up a fair bit of room, but the deliciously juicy harvests more than make up for that, especially since that intense sweetness cannot be found in store-bought sweetcorn.