The Szechuan pepper may be relatively unheard of in some parts of the world, but the red seed pods from this spiky shrub/small tree are commonly used as a citrusy pepper substitute in many parts of Asia. For those in colder regions of the world who aren’t able to grow true peppercorns, the Szechuan pepper makes for a fantastic alternative, and one that will add plenty of colour to your garden throughout the growing season.

When to Harvest – Sep-Oct

How to Grow Szechuan Pepper at Home 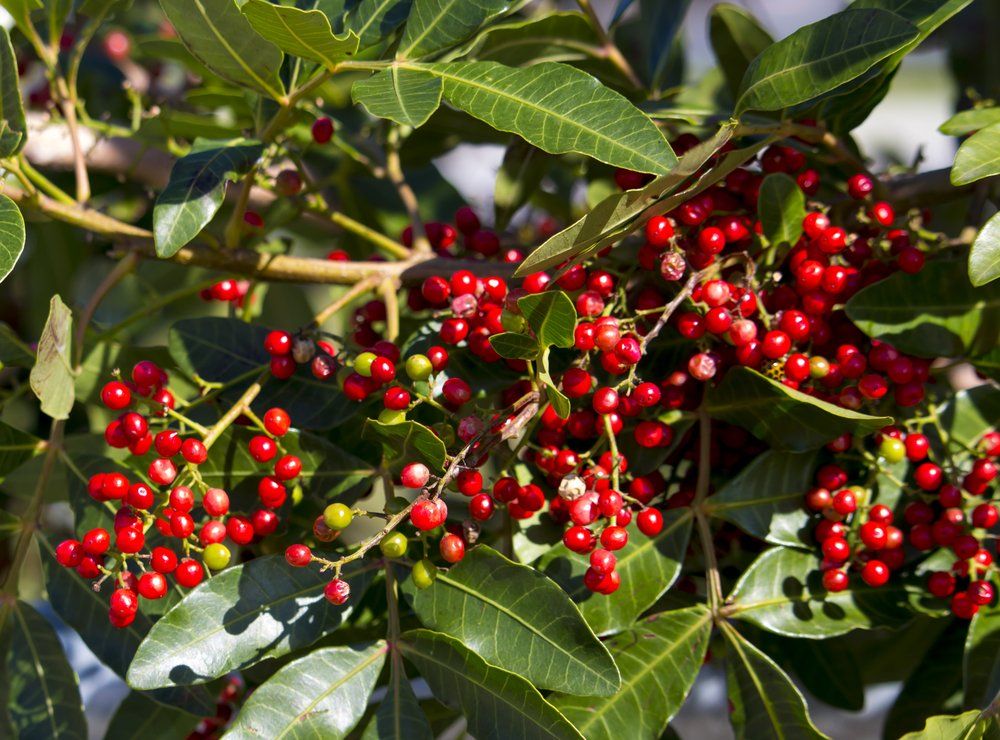 It may sound quite exotic, but the Szechuan pepper is actually very hardy and adaptable, making it so easy to grow. It originates from Asia, but it comes from the Himalayan regions, meaning that it can tolerate poor quality soil and cold temperatures.

The Szechuan pepper will grow in just about any type of soil. However, you probably want your plant to really thrive, which makes well-draining soil important.

In terms of sun exposure, both full sun and partial shade will work. Afternoon shade is important for those in hotter climates to prevent scorching the plant.

Do You Have Other Citrus Plants in Your Garden?

One thing to bear in mind when choosing a planting spot for your Szechuan pepper is the proximity of other citrus plants.

The Szechuan pepper is actually a member of the Rutaceae family, along with:

The Szechuan pepper can carry a type of canker that attacks citrus trees. However, if you keep them apart in your garden, then you shouldn’t have any problems. Most imported seeds these days have also been heat-treated to stop this from happening.

It isn’t difficult to grow Szechuan Pepper from seed, but most gardeners tend to purchase older plants instead.

Although these are more costly, you’ll usually be able to harvest them the season after planting. On the other hand, growing from seed is cheaper, but you’ll need to wait about three years before your first harvest.

How to Grow Szechuan Pepper from Seed 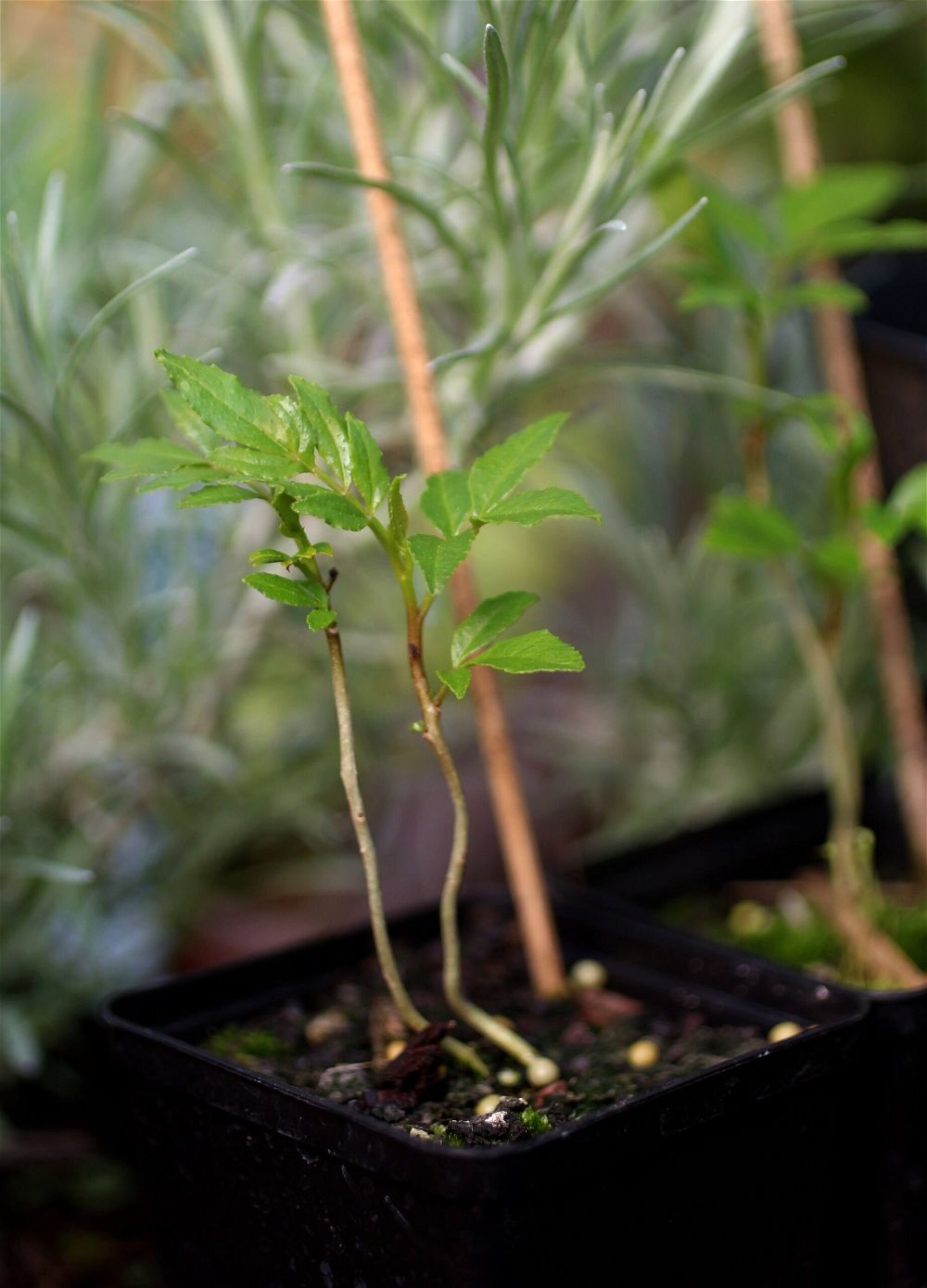 Szechuan Pepper seeds should either be sown in the autumn, which is when they would naturally drop off a tree and be self-sown, or in early spring.

Whichever you choose, Szechuan pepper seeds need a cold period of near-freezing temperatures in order to germinate. The easiest way to do this is by wrapping the seeds up in a dry paper towel and then placing them in the fridge for one to three months.

Once you’re ready to sow your seeds, fill some 9cm pots with a quality compost and water well. Then, place a seed onto the surface of the soil in a pot, and cover over with about 1-2cm of compost.

Lightly water again and then place your pots in a location that’s protected from the elements. An unheated greenhouse or cold frame works well. The seeds don’t need to be kept heated – Szechuan pepper germinates best at temperatures between 5-10ºC. However, just like with most other seeds, temperature fluctuations will slow germination down – consistency is always best.

It’s difficult to say how long it will take for your seeds to germinate. This varies depending on everything from your environmental conditions to the quality of your seeds. Either way, germination usually takes a month or two, but could take up to one year.

Keep your seeds moist throughout the germination process, and after they have sprouted too. Once you notice seedlings appearing, bright light is important, but you can keep temperatures the same.

How to Plant Szechuan Pepper Outside

You will need to keep your Szechuan pepper plants in pots for their first year. While you can move their pots out over the summer months, they’ll need protection from the winter elements.

In their second year, they’ll be ready to move outside.

Prepare your planting bed by weeding it and scattering on a slow-release fertiliser. Then, dig a hole large enough to accommodate one of your plants. Each plant will need about 4m in diameter of space.

Set each plant into its new hole, cover over with soil, and then firm down. Water thoroughly after planting.

How to Plant Szechuan Pepper in a Greenhouse

Due to its size and its preference for cooler temperatures, the Szechuan pepper is usually grown outside.

If you would still like to give greenhouse growing a try, it may be best to keep your Szechuan pepper in a pot. This will allow you to move the plant outside in the summer, when a greenhouse may be too hot for it.

Choose a pot large enough to accommodate the plant’s current root system, but with a little extra room for growth. You will need to repot every year or so, as the plant grows relatively quickly.

How to Care for Szechuan Pepper 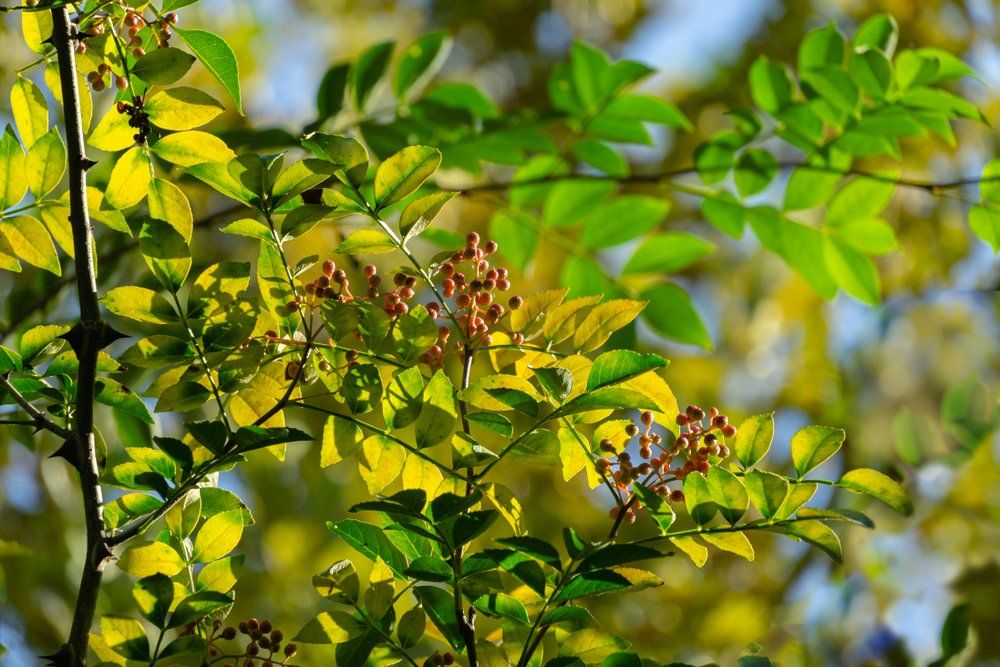 Being such a resilient tree means that the Szechuan pepper doesn’t require much in terms of care. However, a little extra attention never hurts…

The Szechuan pepper does best when its soil is kept consistently moist. When grown outside, the rain usually takes care of this. Even during long, dry spells, the Szechuan pepper’s drought-tolerant properties keep it going, although manual watering during a drought will save the tree from any stress.

Once mature, a Szechuan pepper tree will usually drown out the weeds around it. However, until then, you need to do this job yourself. Weeds can cause a great deal of damage to young Szechuan pepper plants, seriously inhibiting growth. This makes regular weeding a must.

One way to cut back on the amount of weeding you need to do is by laying a mulch around each plant. This not only suppresses weed growth, but also helps to retain moisture.

You don’t need to fertilise your Szechuan pepper tree – it will do just fine without the extra help.

However, if you would like to try to boost growth, then give it a small amount of a general-purpose feed in early spring. Go with about half the recommended dose.

Alternatively, top-dress the soil around your Szechuan pepper plants with a quality compost or well-rotted animal manure in the spring. This helps to enrich the soil that your plants are growing in, which then benefits the plants themselves.

How to Harvest Szechuan Pepper 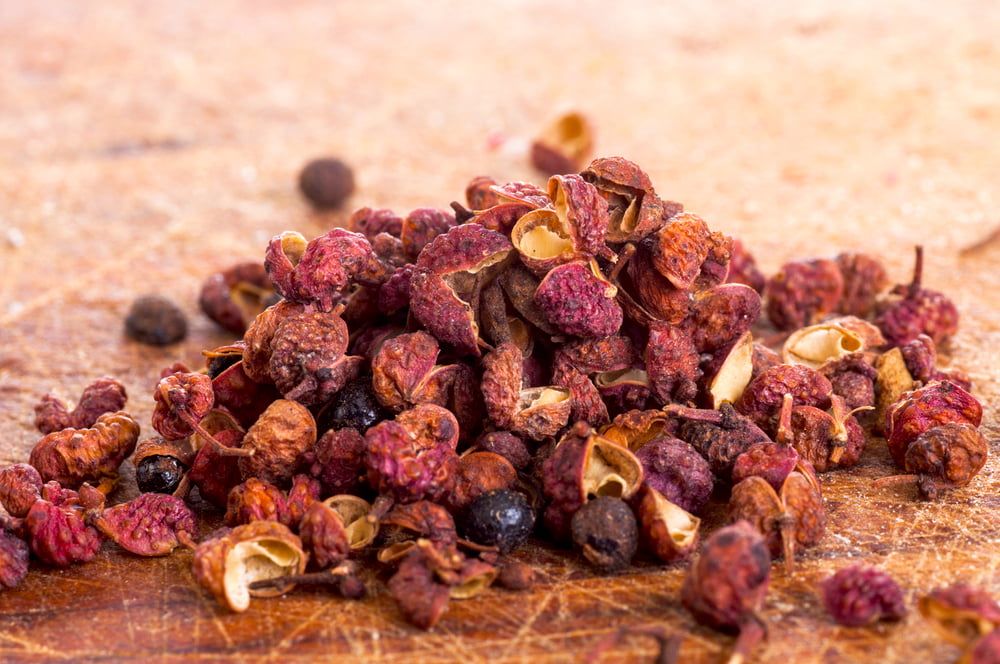 Szechuan pepper is usually harvested in the early autumn. The tree produces its flowers in the late spring/early summer, which are followed by pink berries. Once autumn rolls around, those pink seed cases start to split open – this is the perfect time to harvest them.

Now for the confusing part…

Rather than harvesting the dark seeds that sit inside the pink coverings, it’s those papery outer cases that you really want. The seed doesn’t actually taste of anything, whereas the outer shell is packed with aroma and heat.

One way to pick the “peppers” is by harvesting entire florets. Snip these off at the stem and then place them in a warm and well-ventilated location for a couple of days to dry.

Alternatively, place a tarp underneath your trees and wait for the seeds to naturally drop. You can give the trees a little shake towards the end to speed the process up a bit.

Once you’ve got your seeds, separate the seeds themselves from their papery cases – the cases are the part that you keep.

How to Store Szechuan Pepper

So long as you make sure that they are fully dry, you can store your Szechuan peppercorns in an airtight container at room temperature. When kept in this way, they will last for about three to four years.

If you decide to grind your fresh peppercorns (read on to learn how), then you can store them in the fridge. However, they will only retain their flavour for a couple of weeks. For this reason, most people tend to grind their harvest in small batches.

How to Prepare & Cook Szechuan Pepper 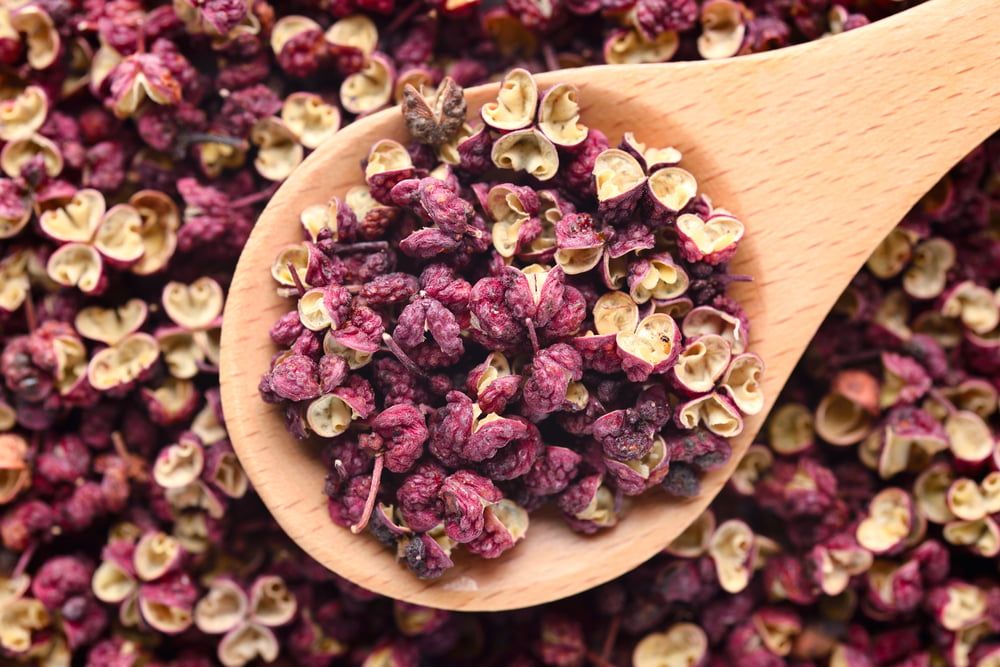 Grinding is usually the preparation method of choice for Szechuan peppercorns. This releases the best aroma, along with that numbing, peppery sensation that the peppers provide.

However, you can’t use an ordinary black pepper grinder for these beauties. Instead, follow these steps:

Once you’ve got your ground peppercorns, you can use them in so many different ways. Their flavour profile is truly unique – they’ve got a beautiful citrusy zing but also a mouth-tingling, numbing effect. Foodies love them for how they transform the “experience” of a meal.

That being said, you can also use Szechuan pepper as a substitute for regular black pepper in just about every dish.

Szechuan pepper trees are usually quite resistant to most of the pests and diseases out there. However, the main ones to look out for are:

There are several different types of Szechuan pepper out there. Each one has its own distinct characteristics when it comes to flavour, but some are much harder to find than others.

The Red Szechuan Pepper and the Green Szechuan Pepper are the two varieties that are most commonly available. However, look a little harder and you’ll find everything from the Black Magic, with its deep purple foliage, to the North American Prickly Ash, which, as you can tell from its name, is a version of the plant that is native to North America.

With its distinct citrusy but punchy flavour, Szechuan pepper is a highly sought-after ingredient all over the world. Find it on store shelves and you’ll be shocked at the prices, but grow this low-maintenance tree yourself at home and you’ll have a regular supply of peppery goodness for several years to come!