What to Look for in a Screwdriver Bit Set

In this guide we’ll look at the best screwdriver bit sets for the UK market.
We’ve compared the number of bits, both for screwdriver and impact driver, accessories and cost
to give you our top recommendations.

What Are The UK's Best Screwdriver Bit Sets? 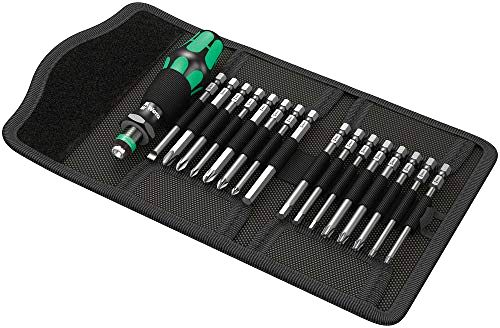 This Wera Kraftform Screwdriver and Bit Set is from one of the best names in the business, and Wera certainly haven’t skimped on the quality here. If you’ve ever tried to use cheap screwdriver bits, you’ll know what we mean.

Avoid stripping screws of all kinds with what we think is the best screwdriver bit set on the market. They’ve even included their super comfortable anti-fatigue screwdriver that has ergonomic rubber grips for excellent purchase. 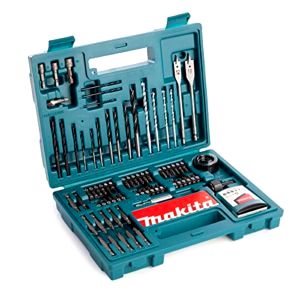 Makita make high quality hand and power tools for trade and DIY jobs, and they haven’t skimped on the accessories in their B-53811 set.

With a wide range of drill bits suited for timber, masonry and steel, and a serious collection of more than 70 impact driver bits, there’s not a lot that you can’t do with what we think is the best drill and screwdriver bit set on this list. 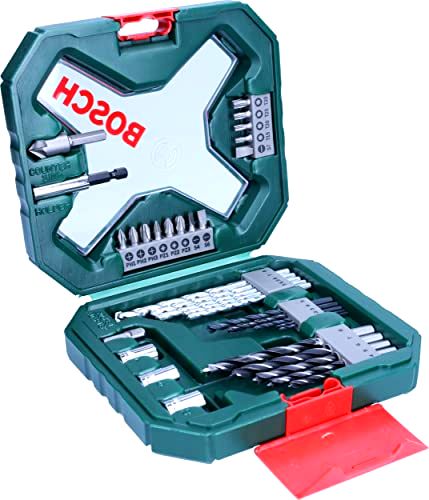 Bosch are known for quality and durability across the world. This simple, yet professional Bosch X-Line Classic kit doesn’t let the brand down at all. We loved the simplicity of the compact kit as well as the quality of the drill bits you would expect from Bosch.

Although you only get 13 bits, this screwdriver bit set comes with four Torx heads and a high-quality countersink bit that you might not expect from a kit this compact. We think it’s the best drill bit set that you can pick up and take with you anywhere. 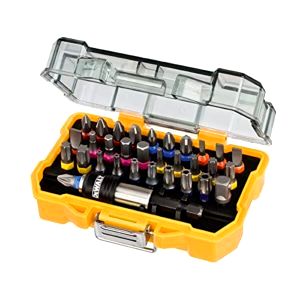 Like Makita, DeWalt is a familiar brand to anyone that works in the building trade. Their XR Professional Screwdriver Bit set is “guaranteed tough” and the impact bit holder is perfect for anyone using impact driver bits on a daily basis.

The colour coded bits are well-machined and sit snugly in the bit holder without getting stuck, and the “Tic Tac” box is a great feature. We absolutely loved the fact that this little box slots into a gap in our DeWalt impact driver box. It’s features like this that make this DeWalt the best screwdriver bit set. 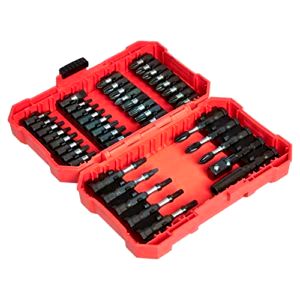 Needing no introduction, Amazon are the kings of online shopping. You might not be familiar with the Basics brand, but it showcases thousands of different products that get the job done will without splashing too much cash. The Basics 42-piece impact bit set is a great example of this.

If you use an impact driver, you need to use impact driver bits. Regular screwdriver bits will get stuck or even shatter under the extreme forces that impact drivers need to work. It’s good to see an affordable bit set that is tough enough to take the pressure and comes with a decent selection as well.

Featuring all the favourite sizes of Phillips, flathead and the ever-popular Torx bit, you also get a small selection of square drive bits as well. To top it off, all the bits come in a sturdy carry case that keeps them safe. 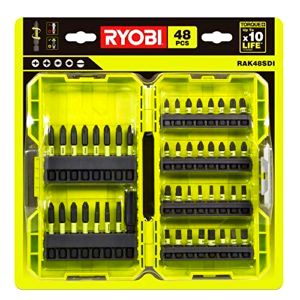 Best known for their affordable power tools and excellent ONE+ battery system, Ryobi also happen to make some of the best screwdriver bit sets available right now. This comprehensive set of 48 impact-rated bits is the ideal companion to your combi drill.

The matt black driver bits all come with the familiar green Ryobi logo on them and range from standard bit shapes like PoziDrive and flathead to hex drivers and Torx bits. What I really like to see are long impact bits included in the kit. Having long reach bits to hand is always good, but most aren’t rated for impact drivers.

All the bits are held in a handy hard case, and each individual bit is magnetised for keeping hold of precious screws. Another useful addition is the bit holder with a sleeve. You put the screw on the bit, then slide the sleeve down over the screw. It works the same way as holding it with your fingers, but a lot easier! 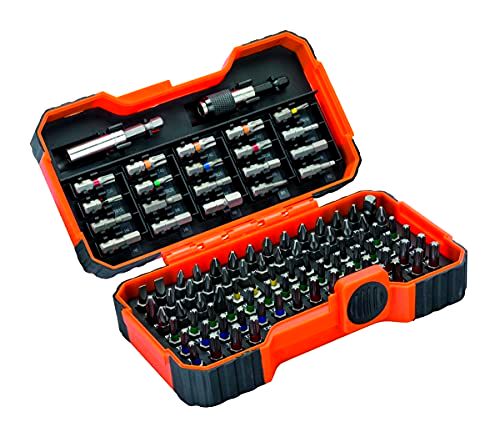 The Swedish tool brand with the fish on the logo, Bahco are known as one of the better quality makers out there. The BH59/S100BC 100-piece bit set is jam-packed full of pretty much every type of bit you can think of.

What makes this the best screwdriver bit set in my opinion is the colour coded bands on each bit. Each type of bit corresponds to a colour, so you can pick them out easily and quickly. The high quality of each bit is obvious, and the pair of bit holders mean you’ll never be forced to put one straight in your drill.

The hard case that the bits are supplied in is another quality inclusion as well. The corners are rubberised to protect against knocks and drops, and most of the bits sit upright so you can see instantly what the head looks like.

How to Choose the Best Screwdriver Bit Set

Drilling and screwing are two completely unavoidable tasks when you’re doing any building or demolition. If you know you’re going to be driving hundreds of screws into wood or drilling a ton of holes in steel, you need a screwdriver bit set that is built to last.

Having a handy bit box in your pocket, or a larger screwdriver kit that is still light enough to carry around the job site is essential. You know that the next screw is going to be a flat head when you have a Torx loaded, so it saves time and frustration to always have plenty of choice.

Impact drivers twist the bit but also add a hammer action to it. This makes light work of driving even long screws into timber. Traditional drill bits just can’t take this level of torsion though, so you need specially strong impact driver bits and holders for the task.

Torx bits have a six-pointed star pattern profile to ensure that when the Torx bit is in place, it’s not likely to slip and strip the head. Torx screwdriver bits are increasingly popular in industrial applications.

The bit you need is always the one you don’t have. Flexibility and versatility are key when you take on any DIY or commercial job. Being able to cut large holes with a spade bit can often make the difference. When the 100-bit screwdriver set comes in a handy box like the Makita B-53811, you’ll be amazed how you got on without it before.

Why does the shank shape matter?

You can fit a round or hex shaped shank into a traditional chuck on a drill, but impact drivers come with a hex shaped holder as standard. You can’t use a rounded shank in one, even in an emergency.