A Japanese manufacturer of power tools, Makita has a reputation for producing high-quality, professional-level products. Several of their cordless tools have won best-of-class awards over the years, so I had high expectations for their DUB185Z Cordless Blower.

How I Tested The Makita DUB185Z Cordless Blower

Interestingly, unlike most of the other leaf cordless blowers I tested, the Makita isn’t actually designed specifically for leaves/garden use. Instead, it’s marketed as more of a multi-purpose blower. On the box, it doesn’t even mention leaves at all – it recommends using the blower to clear hard surfaces in workshops and garages of dust and other debris.

So, in addition to testing the blower on leaves, I also intended to put it to work in the new shed I’m building to see if it could really give me dust-free working surfaces.

Our Verdict of The Makita DUB185Z Cordless Blower

Although not technically a leaf blower, the Makita DUB185Z Cordless Blower is still great at shifting small quantities of dry leaves, and offers up several other uses too. If you have a large garden and moving autumn leaves is your main focus, then I would recommend going for a dedicated leaf blower with a longer nozzle, such as the Bosch, to make the task more comfortable.

However, if you don’t have too many leaves to deal with and would like a blower that can be used year-round for other tasks around your home and garden, then the Makita’s versatility far outshines any of the other options available.

Makita’s Cordless Blower doesn’t require much assembly at all. Simply attach the nozzle to the main unit by twisting it into place so that it locks in, and then attach the battery.

Overall, from unboxing to turning the machine on (battery charging time excluded, since there was a small amount of life in the battery when it arrived) took about 30 seconds.

Compared to the other leaf blowers I tested, the Makita’s design instantly stands out because of its size. It’s less than half the size of standard leaf blowers, yet, thanks to its unique design and distinctive Makita branding, it still looks like a well-made and professional tool.

This blower is equipped with a trigger that controls power. Next to the trigger sits a small switch – this adjusts speed, and there are three speed settings to choose from.

I was excited to see that this blower has also been designed with a vacuum function. To set this up, you need to detach the nozzle and move it to the opening on the side of the machine. Then, from where you’ve just taken the nozzle out, you can fit in the dust bag that comes with the blower.

While that sounds simple enough, this wasn’t actually the case. I spent a good 10 minutes trying to work out how to attach the dust bag to the main unit (the instructions weren’t much help). So, I turned to the internet, only to be left disappointed. Turns out, the dust bag that Makita supplies with this blower isn’t actually the correct size for the tool. So, in order to use the vacuum function, you would need to purchase an additional dust bag. 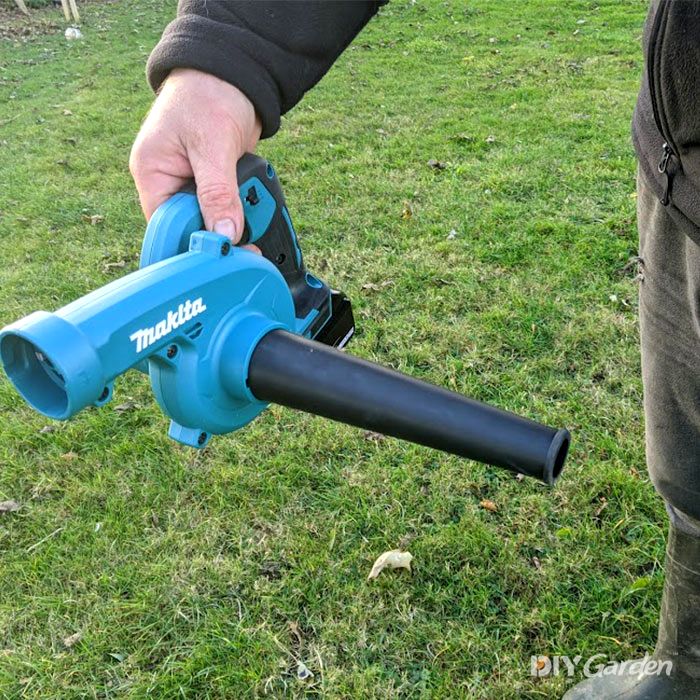 It seems like a bit of an oversight – why include a dust bag in the first place if it doesn’t actually fit? However, with the amount of complaints relating to this that I found online, and no visible response from Makita, the brand must already be aware of the issue, yet haven’t done anything to rectify it. 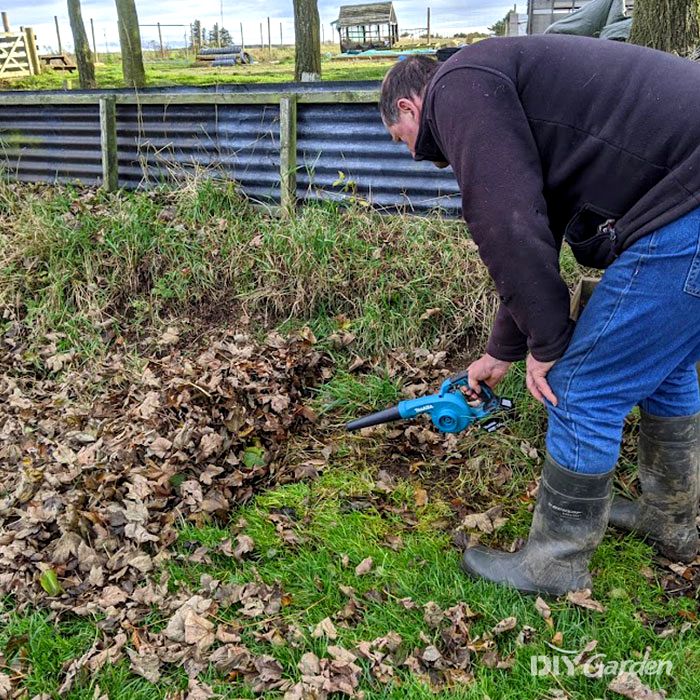 I started by testing the Makita DUB185Z Cordless Blower on dry leaves that were smothering out parts of my grass. The aim was to blow these leaves underneath nearby shrubs, so that they could act as a mulch over the winter.

The Makita did pretty well. I did have to use it on its highest speed, but it managed to move those dry and crunchy leaves to exactly where I needed them. That said, it did take much longer to do this than with the other blowers I tested, simply because of its smaller size.

Since I already had the blower on its highest setting when working with dry leaves, I was doubtful about the Makita being able to shift heavier, wet leaves. Unfortunately, I was right – the wet leaves around the edges of my lawn barely budged – it would be faster to rake those up rather than using this blower on them.

After a quick recharge, I took the blower into the new shed I’m building. I’m currently in the process of cutting up sheets of insulation, so there is dust everywhere. The plan was to blow all of this into one corner, where I could then easily sweep it into a bag.

The blower was still on its highest speed setting when I turned it on, and it instantly kicked up a savage dust storm. So, I dialled it down to its lowest setting and tried again. It was definitely very effective – I was able to gather the dust together much faster than a broom would have allowed. The only downside was how dusty the air inside the shed was once I was done – I had to leave the doors and windows open until the dust settled.

However, once you do this a few times, you start to develop a technique that makes life a little less dusty. It’s a very useful tool for clearing indoor areas, and is one that I will now always keep nearby when doing DIY work. However, due to its inefficiency with leaves, I’ve had to give this blower a lower performance score. 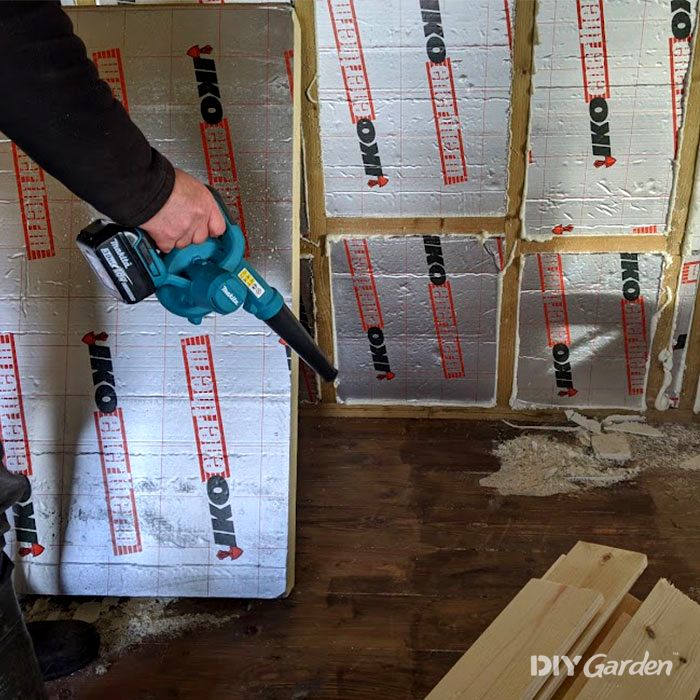 While the best cordless leaf blowers I tested, such as the Bosch, were extremely easy to use, the Makita had both pros and cons.

Let’s start with the positives. The soft grip handle makes it comfortable to hold the blower for long periods of time. Its weight helps with this too – it weighs 1kg, making it easy to manoeuvre around.

However, I have to say that, compared to the longer blowers out there, the small size of the Makita did make it pretty awkward to use. It didn’t help that I’m tall, which meant that I had to stoop almost to ground-level in order to use the blower outside. This wasn’t an issue indoors when I was clearing dust (I could stand straight when doing this), but, when working with the leaves, it would have almost been easier to just get down on my hands and knees to give me better control of the short nozzle. It’s not a good leaf blower for anyone with mobility issues! 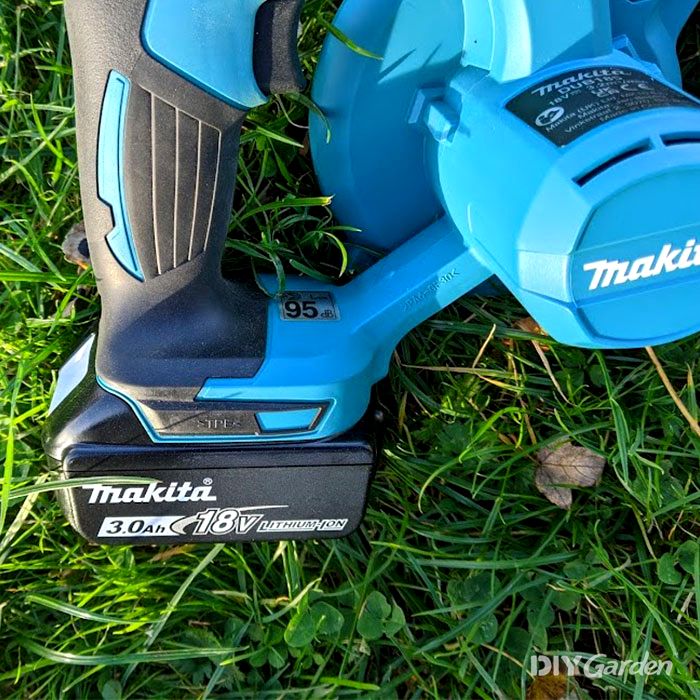 With a maximum speed of just under 245km/h, the Makita sits at the top of the scale when it comes to power. The only blower I tested that was stronger than this was the Bosch at 250km/h, which isn’t a huge increase.

My Makita Cordless Blower didn’t come with a battery, so I purchased a 3.0aH 18V battery. This took just under an hour to charge, which was faster than the other leaf blower batteries I tested. However, when used solely at its highest speed, it only gave me a continuous runtime of about 10 minutes, which was a little disappointing.

According to Makita, the runtime extends quite significantly to 75 minutes if you keep the blower on its lowest setting. This isn’t a problem if you’re using it to clear workspaces indoors. However, if you intend to use it on leaves, the lower settings won’t do much – you need the power of the highest blow speed. 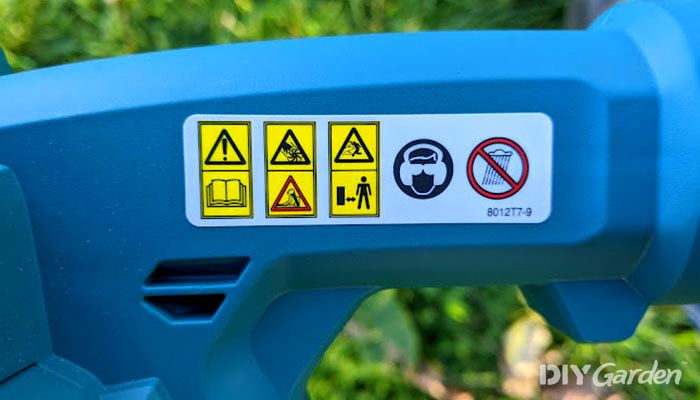 The Makita DUB185Z Cordless Blower comes with a unique safety feature that the other blowers I tested didn’t have – it has been equipped with a battery/machine protection circuit. This basically means that if the battery or machine is overloaded, over-heated, or over-discharged at any point, the machine will turn off, saving you from causing damage that would have been expensive to fix. This is definitely a useful feature for those who plan on using the tool for long periods of time in dusty environments.

Just like the other blowers I used, the Makita was peppered with a few safety stickers, although I doubt that anyone ever actually looks at those!

It’s worth noting that the sound level of this tool at its highest setting is 94dB(A). This sits somewhere in the middle of all of the leaf blowers I tested – the Bosch was quieter at 90dB(A), whereas the VonHaus was louder at 99dB(A). Either way, the Makita is quiet enough to be safely used for short periods of time without the need for ear protection.

That said, if you plan on using this tool indoors to clear dusty surfaces, a face mask would definitely be recommended.

Makita products are usually priced notably higher than their competitors, so I was surprised to see that their Cordless Blower was actually pretty affordable, even if you purchase it with a battery and charger.

However, I’m pretty sure that some of what you’re paying for goes towards the tool’s vacuum function. It’s a shame that this can’t actually be used unless you’re prepared to fork over extra money for a new dust bag, or an adaptor to make the existing dust bag fit the machine.

That said, even if you disregard the vacuum function, Makita’s Cordless Blower is still cheaper than some of the other leaf blowers out there. The fact that it’s so multifunctional means that, in my opinion, you’re getting good value for money, especially if you already own a battery-powered Makita tool and have spare batteries that you can use.

It’s worth noting that this blower comes with a one year manufacturer’s warranty, which can be extended to three years if you register online. You also have the option of purchasing additional accessories, from a flexible hose to a long, tapered nozzle, all of which make the blower even more versatile.

Although not technically a leaf blower, the Makita DUB185Z Cordless Blower is still great at shifting small quantities of dry leaves, and offers up several other uses too. If you have a large garden and moving autumn leaves is your main focus, then I would recommend going for a dedicated leaf blower with a longer nozzle, such as the Bosch, to make the task more comfortable.

However, if you don’t have too many leaves to deal with and would like a blower that can be used year-round for other tasks around your home and garden, then the Makita’s versatility far outshines any of the other options available. 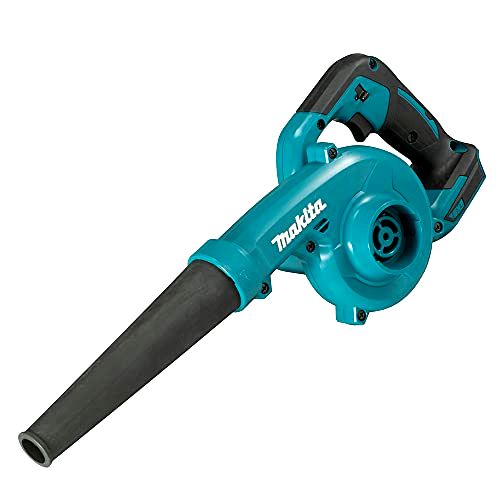