If you’re looking for a way to manually split logs without the brute force that an axe requires, then you’ll probably be curious about the many different grenade log splitters out there. The Rolson 10780 Wood Grenade Log Splitter is one such product. It has been designed to make it easy to split logs in four directions, so I was eager to test it out on logs of varying sizes to see how quickly and effectively it would get the job done.

Our Verdict of The Rolson Wood Grenade Log Splitter

If the majority of the logs that you need to split are quite large in size, then this may not be the tool for you. While it’ll still split them, it doesn’t really make life much easier. However, if small or medium logs are your focus, then the Rolson 10780 Wood Grenade Log Splitter would be a great buy. It does still require a bit of brute force, but this is nothing compared to what you’d need for an axe – use this instead and you’ll be able to split your logs significantly faster and with much less effort, which is always the ultimate goal! 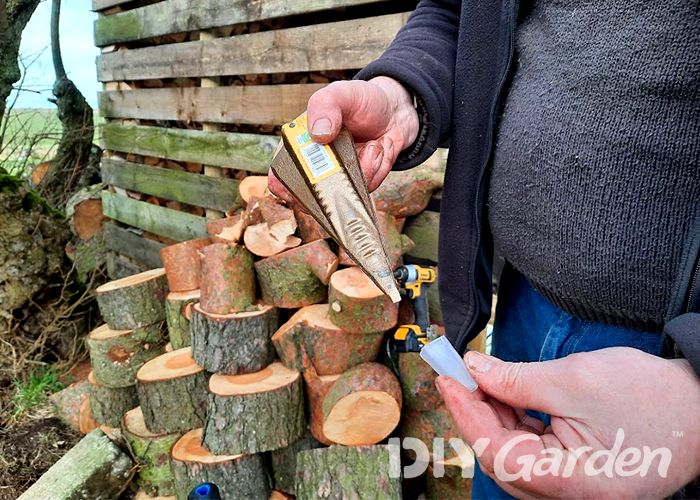 While some of the log splitters that I tested required a fair bit of assembly, this one was the opposite. It comes ready to use – all you need to do is remove the rubber tip and you’ll be able to get started! 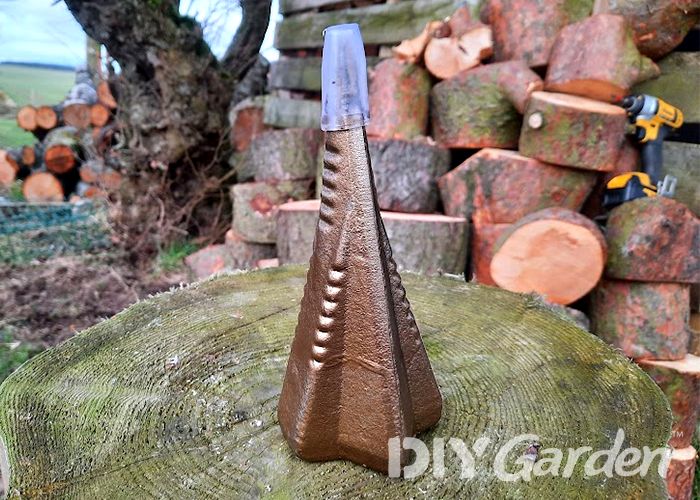 At first glance, this log splitter certainly looks very unique, and not just because of its gold-coloured exterior either. It’s shaped like a conical grenade, standing at 17.5cm in height. While it’s not the smallest wood splitter that I tested (the Forest Master USBB Firewood Kindling Log Splitter wins that prize), it’s still very compact.

However, it has a good amount of weight behind it. This is down to how it’s made from drop forged and heat-treated iron, which gives it a very robust feel.

Overall, this grenade log splitter boasts a very minimal design. It’s a one-piece tool with no extra/moving parts – it’ll appeal to anyone who prioritises simplicity. 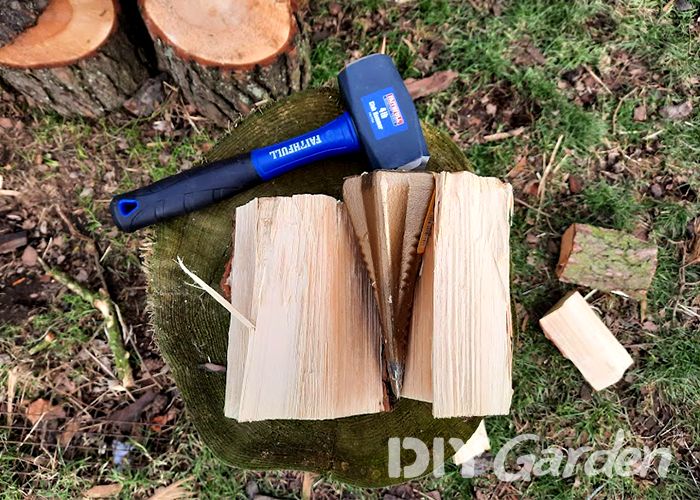 Although this log splitter doesn’t come with a sledge hammer, you’ll need one in order to use it. I started with the Faithfull FAIFG4 4lb Club Hammer, however, this is a relatively small hammer, and I found that it hindered performance quite a bit, so I ended up switching to a much larger and heavier hammer.

With this, I was able to use the grenade log splitter on just about every size of log. It obviously performs much better on smaller logs, but it’s more than capable of splitting large logs with a bigger diameter too.

I didn’t really notice a difference in performance when splitting green and dry wood – it worked well on both. The majority of the wood that I was working with was pine, which is a softwood. However, I also tested it out on beech, which is a harder wood, and it handled this just fine.

As I mentioned earlier, Rolson states that this log splitter has been designed to split wood four ways. I’ve used it for several hours in total now and I have yet to see it do that. Instead, it splits logs into two, which means that you’ll then need to split each of those halves again.It’s also worth noting that, for the best performance, you’ll need to line the tool up with the grain of the wood, rather than against it. 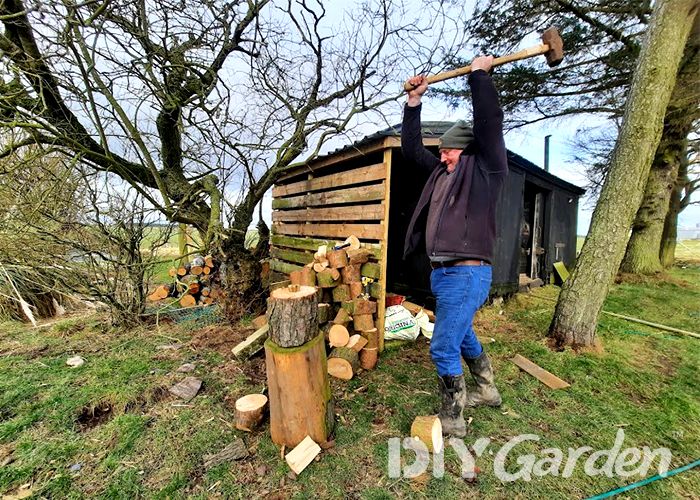 Theoretically, this log splitter should be extremely easy to use. Simply hold it in place over your log, tap it in a few times with a hammer to embed it into the wood, and then hit it harder a few times to split your log. When doing this with smaller logs, it works like a dream – the process really couldn’t be any easier.

However, if you’re trying to split a larger or knotty log, then it definitely feels like hard work. You have to use a significant amount of force – with some of the logs that I split, an axe would have probably been easier. The concept is great, but if most of your logs are large in size, it would be worth looking for a similar but larger design.

When using this log splitter, it really helps if your logs are relatively flat at one end. You need your log to be able to stand on its own – it’s difficult to properly swing the hammer while also holding onto the log. 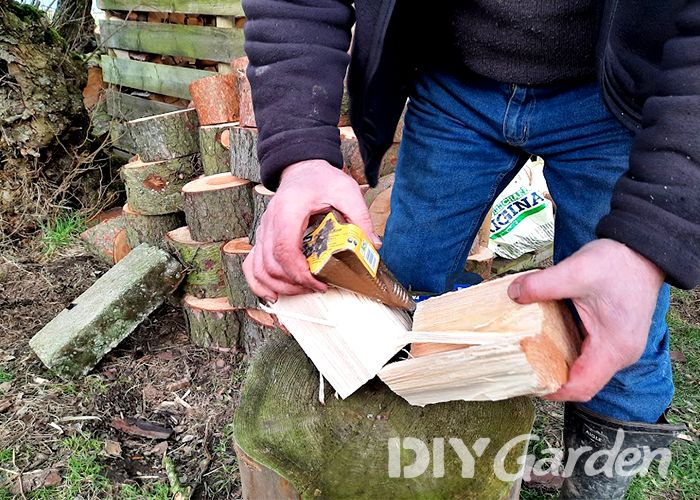 Out of the five wood splitters that I tested, this one produced the most flying splinters. As a result, I’d recommend wearing eye protection, especially if you’re using a smaller hammer and are standing close to the log.

In terms of the tool’s actual safety features, there aren’t really that many that could have been included in a design as simple as this. Rolson has fitted the grenade with a rubber tip to prevent anyone from accidentally injuring themselves when the tool is not in use. There’s also a sticker at the base of the grenade that displays some safety information, although this becomes illegible after it has been bashed with a hammer a few times.

I’d say that this log splitter is slightly quieter than using an axe. This is probably down to the fact that your hammer is hitting metal, rather than wood. Of course, you do still hear that satisfying crack each time the wood splits, but this isn’t particularly loud.

It’s ideal for those of you with nearby neighbours, as it shouldn’t disturb them too much!

Considering its quality, this log splitter comes in at a very reasonable price, but don’t forget that you’ll also need to buy a hammer to use with it if you don’t already have one. From my experience, it seems like a very sturdy little tool. Even when using it with my larger hammer, it didn’t dent or crack – it feels durable and long-lasting. That said, if the metal does dent, you can use a file to straighten things back out.

Does it offer good value for money? I would say yes. Even when you take the price of the hammer into account, it still only costs slightly more than an axe would, yet is so much more convenient to use.

If the majority of the logs that you need to split are quite large in size, then this may not be the tool for you. While it’ll still split them, it doesn’t really make life much easier. However, if small or medium logs are your focus, then the Rolson 10780 Wood Grenade Log Splitter would be a great buy. It does still require a bit of brute force, but this is nothing compared to what you’d need for an axe – use this instead and you’ll be able to split your logs significantly faster and with much less effort, which is always the ultimate goal!