One of the hardest parts of metal detecting is physically digging up your find. You can do it with a standard garden trowel of course, but a specific tool will help you out on the dry, stony or root-strewn ground.

I took the DR OTEK heavy-duty folding shovel out on a metal detecting jaunt and tested it on wet soil, beneath trees, and in dry stony fields. It did a pretty good job overall but sometimes struggled on hard ground.

Our Verdict of The DR OTEK Metal Detecting Folding Shovel

Overall this is a handy accessory that made metal detecting easier and it can be used for gardening, camping, and other outside jobs too.

It’s one of those tools you’ll be glad you bought and would make a good gift for metal detectorists or campers.

DR OTEK folding shovel arrived in two sections. There’s a shovel and a handle extension. The extension screws on to form a 25 cm handle on a 13 cm spade.

When the handle is unscrewed and the shovel section is folded in half it fits neatly inside its Velcro closed pouch.

I had no problems figuring out how to assemble and disassemble this multi-purpose trowel at all. 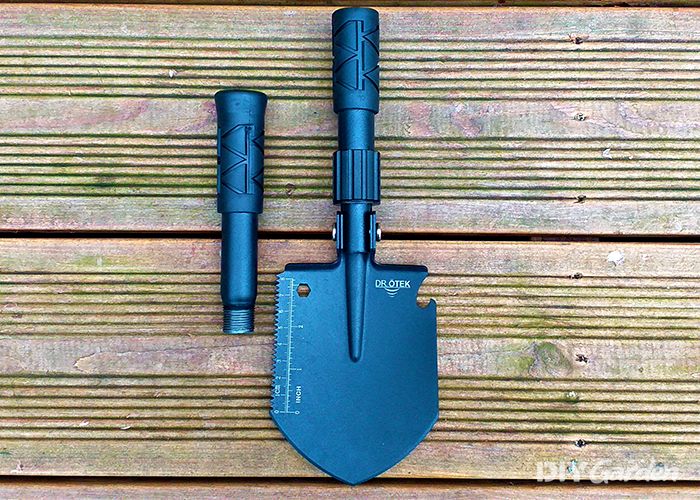 Dr Otek’s folding shovel is a multipurpose tool in that its shovelhead and pickaxe spike can be used in different ways.

It’s made from manganese steel with a tempered forged high carbon steel body and the locking mechanism is alloy steel. It should last a good long time, and it certainly felt sturdy enough in use.

Here’s what it’s got:

A shovel head with a pointed tip is a metal detecting godsend. The shovel head is large enough to dig out plenty of soil, but not so much that you’ll toss out the find.

It has a ruler along the right-hand side indicating 1-8 cms (that’s 3 and a bit inches) this is a handy feature that marries up with a metals detector’s depth indicator.

Knowing how far down to dig and having a visual measurement to go by means less effort, less digging and happier landowners.

One side of the shovel head is serrated with teeth deep enough to cut wood.

Opposite the shovel head is a pointed pickaxe end that points down the handle when it’s not in use. It’s approximately 12 cm in length.

DR OTEK’s folding shovel comes in a tough nylon pouch that’s water-resistant and has a Velcro closure. On the reverse is a belt buckle loop for easy transportation.

The rubberised handle has two soft grips to make the dig easier and when it gets muddy or sweaty the grips help stop you from slipping. 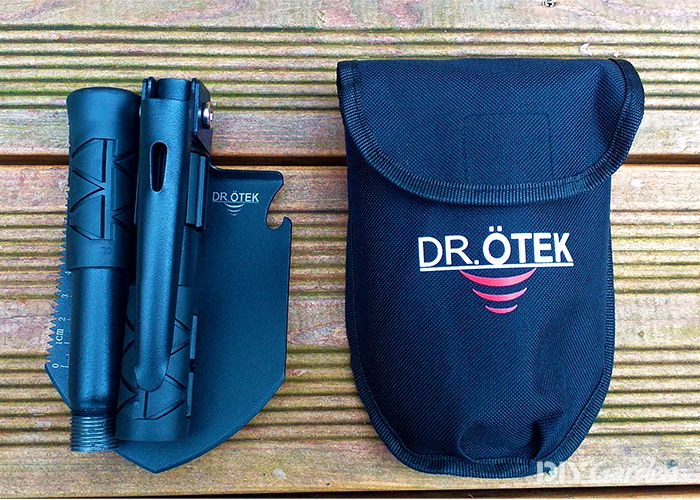 I really wasn’t expecting much as I’m always wary of the ‘extras’ that are often just a waste of money, but this one surprised me.

The serrated edge was great at sawing through fine tree roots that tangled the trowel.

Some review images show it sawing through branches, but I feel this is a step too far. It took ages to cut a small branch and made a mess of it, but for fine tree roots it was excellent.

The pickaxe that I thought was a gimmick was actually really good at breaking up hard ground read for the dig. The handle was long enough to get good leverage and the padded non-slip grips did their job.

Grass is easy to dig over when the soil is damp, but when it bakes solid in the summer I think the pickaxe and hoe will be worth their weight in gold.

Once I’d slammed the pickaxe into the ground to break up the surface soil, I turned it around and used the spade head as a hoe to drag back the loose soil and stones. This saved me some hard work trying to drive a spade head into the unyielding ground.

The pouch is waterproof and it’s easy to wash out afterward because no end of mud attaches itself to a metal detecting spade!

I attached the pouch to a rig on my rucksack and because it only weighs 500 grams I barely noticed it there.

The only feature I didn’t use was the bottle opener, but I’ll be sure to remedy that in summer!

On the downside, the lock that keeps it upright in the shovel digging position doesn’t always hold and tends to collapse into the ‘pick axe’ form.

I asked my other half to tighten it assuming my grip wasn’t strong enough, and it improved somewhat, but still collapsed a few times in hard, dry soil.

Overall this is a handy accessory that made metal detecting easier and it can be used for gardening, camping, and other outside jobs too.

It’s one of those tools you’ll be glad you bought and would make a good gift for metal detectorists or campers. 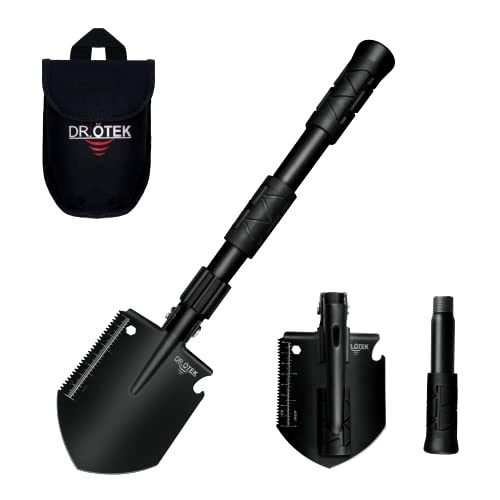