The other big Japanese tool brand, Ryobi’s bright green kit has been on the scene since 1943. Legendary for their ONE+ battery system that shares power between everything from air compressors to chainsaws, the Ryobi R18PD3 is one of their workhorses.

If you haven’t already bought into Ryobi’s way of powering things, this is probably the best place to start. It comes completed with not one, but two 1.5 Ah batteries and one of the smallest fast chargers I’ve come across so far.

This Ryobi drill is definitely up there with the big boys when it comes to powerful drills. The only way to get a decent idea of how each one performs was to put them head to head against my homemade test rig. Designed to test drills and drivers against different materials, it’s not scientific but it makes a good case.

I put this drill to the test against timber, brick, and steel plate to see how it performed against the competition. But it’s not just about whether it can do the job. I also kept a close eye on how the drill felt in the hand, whether it was well balanced and if it was comfortable. 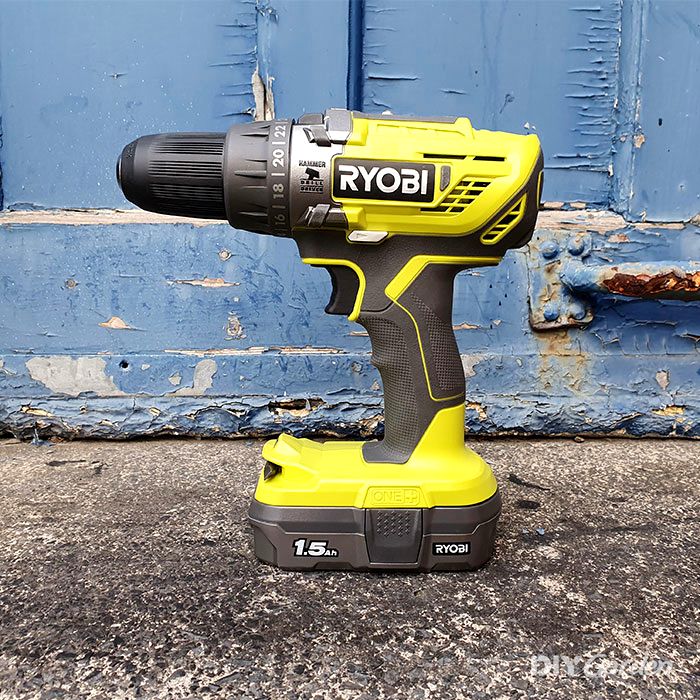 If you’ve ever held a Ryobi tool before, you’ll know about their patented GripZone technology. It’s quite simply the best overmoulded grip on the market if you ask me. The rubberised sections contain hundreds of tiny plus signs that just seem to grip really well.

It’s not just a grippy handle though, there’s also the brilliant ergonomic shape that makes the Ryobi R18PD3 an incredibly comfortable tool to hold on to. The extra ridge included on the grip sits nicely between the middle and ring finger and makes it just that bit easier to hold.

Having a good grip is probably for the best though because this feels like a heavy cordless drill. Weighing in at 1.3 kg, it’s the same as the DeWalt DCD796, but the long body and brushed motor make it feel a little off-balance in comparison.

The plastic chuck on the front of this drill seems rather long, and it contributes to the overall length of 215 mm. It’s not the smallest cordless drill and it definitely can’t fit into as tight gaps as the Terratek 18V, for example.

The torque selector ring behind the chuck feels excellent. It’s chunky, clunks round with a positive action, and gives you a huge 24 torque settings to choose from. The big switch behind it to change from hammer to driver to drill mode is really satisfying as well. It thuds into place, just like the gear selector switch behind it.

There’s a work light placed on the bottom of the grip, that only lights up when you’re pressing the trigger. It’s annoying that it doesn’t stay on when you let go of it. Also, it would be nice if you could pull the trigger slightly when it’s locked and just get the LED torch. It’s a feature I really like on the Makita DHP484 and makes this cordless drill feel rather basic.

One innovation that Ryobi have included on this drill is the handy little bit holder on the bottom of the grip. Supplied with a double-ended PZ2 and no 6 flathead bit, it’s going to come in handy when other bits have been lost or forgotten about.

As much as I admire the ONE+ battery system, the shape of the batteries limits the form of Ryobi’s power tools. The sheer size of the 1.5 Ah battery means the bottom of this drill is huge. Compared with the comparatively streamlined ones on the DeWalt DCD796N, this drill feels clumsy.

One thing that started getting to me on this cordless drill was the lack of a charge indicator on either the battery or the drill itself. There’s no way to tell if you’re getting low until the battery goes dead! 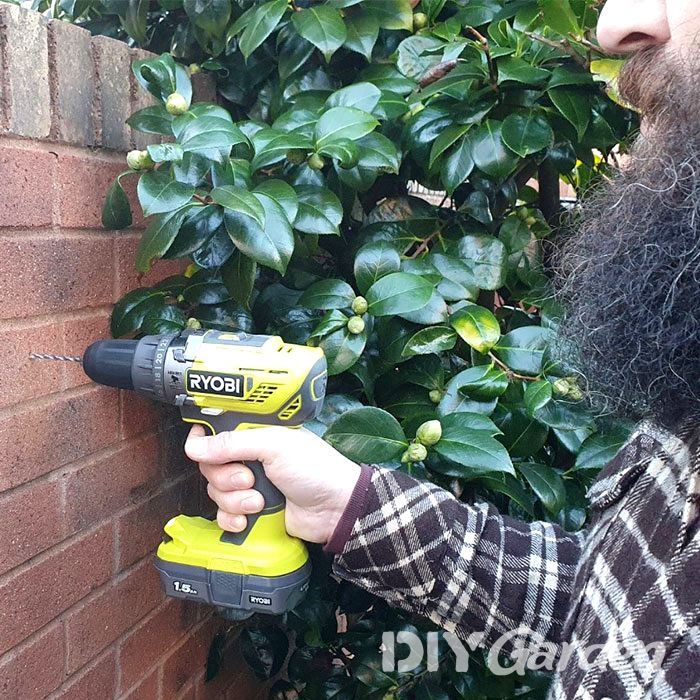 I started off by drilling 30 holes into 38 mm thick CLS timber using a typical 5 mm wide wood bit. There must be a lot of electronic speed control on this cordless drill because it felt like it drilled at a slightly different speed for each hole. It was quite confusing, as I was pulling the trigger all the way back and trying to use the same amount of downward pressure for each hole. It took a bit too long and wasn’t all that comfortable. A bit of a disappointment already!

Driving screws into timber was better, I’m pleased to report. The weight of the drill helped to bear down on the screws, although the clutch kicked in a couple of times. I drove ten 70 mm screws in and out of some CLS timber, and the drill felt capable enough. Although it was strong enough to drive the 150 mm wood screw into some timber, the clutch started to slip before the screw had bottomed out. Still, it felt like there was plenty of torque to spare.

When it came to drilling a hole in a 3 mm steel plate, the R18PD3 performed reasonably well. Taking one minute and 15 seconds, it was in the range of being useful without being astonishing. I wouldn’t want to drill hundreds of holes with this cordless drill, but it wasn’t a terrible experience.

The last test was carried out on a regular house brick. Drilling a 5 mm wide hole is a common enough task, and the Ryobi took a little more than 20 seconds to complete the task. In hammer mode, I didn’t experience any of the electronic speed control problems either. 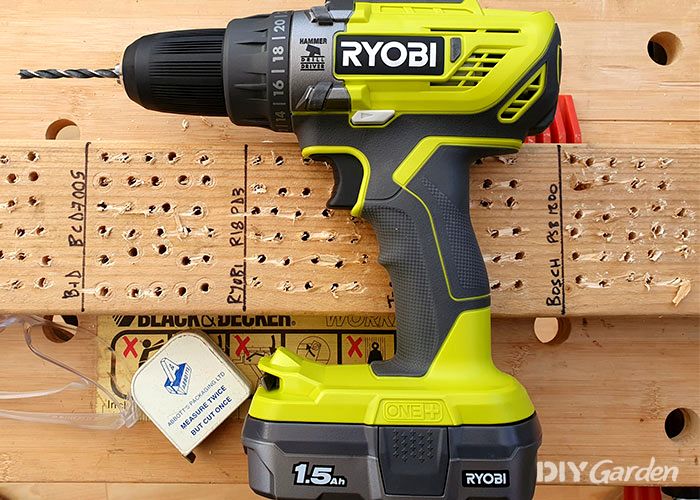 The working power for the R18PD3 comes from Ryobi’s celebrated ONE+ 18 Volt system. The reliable 1.5 Ah units that come with this tool can reportedly drive 160 13 x 50 mm holes into wood on a single charge. Not bad for a smaller battery unit!

And if that wasn’t enough to have you reaching for your wallet, you get two of these batteries included in the set. That simply means you’ve got more runtime, more power, and most importantly less downtime.

The only way this setup could be improved would be with a brushless motor. The brushed motor fitted to this cordless drill makes it a little less efficient compared with the brushless ones found on the DeWalt DCD796 or the Makita DHP484.

Even though this might not be the most powerful of the cordless drills on my list, you can still get an impressive 50 Newton metres (Nm) of torque on the business end. It also boasts an impressive 23,400 max impacts per minute (ipm) which should be plenty in hammer mode. With a maximum drill speed of 1,800 rpm, it’s not the fastest on my list but good enough for DIY tasks.

It’s also worth mentioning that the IntelliPort charging system is absolutely tiny. It fits easily in the palm of my hand, which should make it easy to store or carry around. It features the standard flashing light system to tell you when it’s charging and when it’s fully topped up, which takes around three hours.

According to Ryobi, the R18PD3 puts out a sound power level of 96.6 dB. That’s roughly equal to a nightclub sound system in volume, so you’re going to need your ear defenders. You’re obviously not going to reach those noise levels in driver mode, but for hammer drilling, they’re essential.

The noise this cordless drill puts out isn’t harsh either. Most of the time, it sounds really smooth and professional, unless you’re in top speed and you take your finger off the trigger. You get the same clunk noise I noticed in the DeWalt DCD796N. It could be something to do with the electronic brake and the metal gearbox, but it doesn’t sound great.

Seeing as the Ryobi R18PD3 is one of the more powerful combi drills I have tested, you need to treat it with the right amount of respect. You can feel the torque when you pull the trigger, so having a proper grip and paying attention is incredibly important.

If you’ve got your ears and eyes open, and you’re wearing the proper personal protective equipment (PPE), you shouldn’t have too much trouble with a cordless drill like this. One of the real safety benefits you get with battery-powered drills is the elimination of overrun. Thanks to electronic brakes, once you let go of the trigger, the bit stops spinning instantly. They’re great.

I need to consider the scope of this combi drill kit. Far from being supplied a simple bare tool with no extras, I’ve got the basis for a whole Ryobi collection here. Having two batteries is great. You know that if you play your cards right, you’ll never have a dead battery when you need it the most.

Thanks to Ryobi’s huge collection of relatively affordable “bare” tools, you could start building up your arsenal with this kit as the base. It makes this kit ideal for a novice DIYer that wants to get into a reliable stable of cordless tools.

This combi drill kit is one of the more expensive on my list, but you get an awful lot for your money, especially if you want to buy into Ryobi’s extensive collection of tools.

I think that Ryobi have come a long way in the last few years. The quality of their tools has improved, and I’ve been impressed by a lot of their tools  I’ve tested out. The R18PD3 is one of the best combi drills for DIYers, but it’s not going to challenge the more professional tool brands that take the top spots.

If you’re familiar with Ryobi’s ONE+ battery system, you’ll know that by buying into their stable you have access to hundreds of different tools. The two batteries that come with this combi drill kit can be used in anything from air compressors to belt sanders, which is impressive.

Overall, this is a dependable and reasonably heavy-duty combi drill. It’s not as powerful as the DeWalt or Makita pro-level drills, but for a DIY bit of kit it’s just the ticket. Some heavy-duty DIYers might moan about the relatively small 1.5 Ah batteries supplied with this drill, but it’s perfectly fine for most small to medium size jobs. 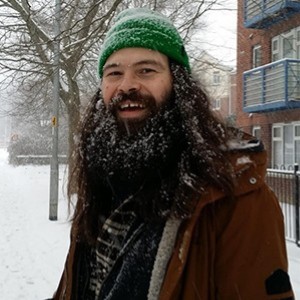