Terratek is a British brand loved for their low-cost yet reliable garden tools. Their cordless strimmer definitely falls into the low-cost category, with this being the least expensive of all the strimmers I tested. However, after seeing how much praise the brand has received for offering great value for money, I was looking forward to giving their strimmer a try.

How I Tested The Terratek Cordless Grass Strimmer

Terratek states that their cordless strimmer is designed to seamlessly cut long grass and weeds, but I found this description to be quite vague. Sure, it could probably easily handle delicate dandelions (although, in my opinion, these are definitely not a weed!), but would it be any good with thicker vegetation?

To find this out, I decided to test the strimmer on various patches of long grass around my farm, as well as a diverse selection of weeds, from spindly thistle stems to overgrown brambles, docks, and nettles.

Our Verdict of The Terratek Cordless Grass Strimmer 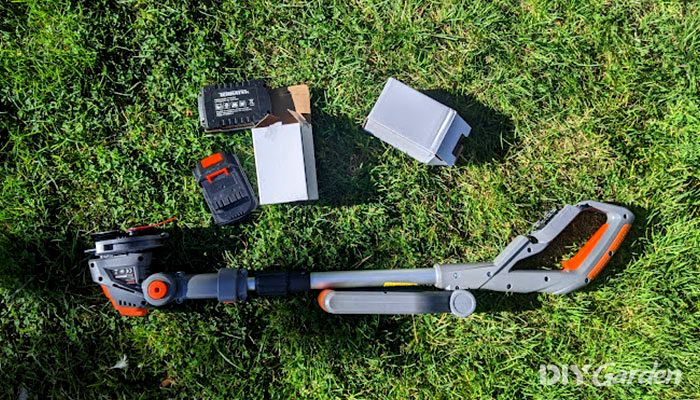 Compared to all of the strimmers that I tested, Terratek’s cordless strimmer required the least amount of assembly. The shaft and handle were already assembled, and you only need to use one screw to attach the guard. At this stage, you can also clip in the flower guard if you want to use it.

The strimmer comes with a pack of plastic blades, along with an extra one that’s already clipped in, saving you from having to do this too. Overall, assembling this Terratek strimmer took less than five minutes. 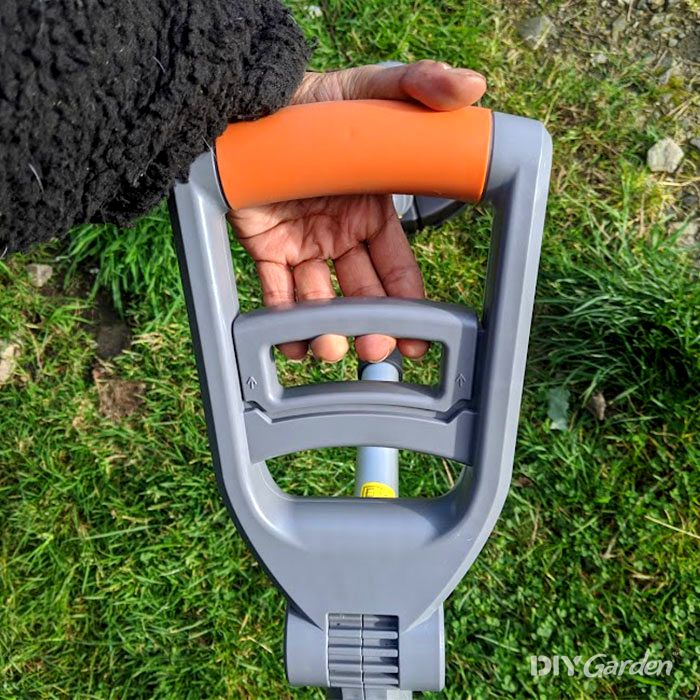 Just like all other Terratek tools, this strimmer sports the brand’s signature orange and grey colour palette. Visually, it looks like a sturdy and solid tool, and its multiple design features make it appear even more impressive.

To start with, the shaft is adjustable between 95cm and 115cm, which is handy if people of varying heights are going to be using the strimmer. You can adjust the handle as well, simply by pulling a lever. The head can be adjusted too – it rotates 180 degrees.

The Terratek cordless strimmer has been designed with a 25cm cutting diameter. This is pretty much on par with its competition. It also has an edging function, and has been designed to make it easy to switch between its strimming and edging modes.

Rather than making use of strimmer cable, this strimmer cuts with nylon blades. The blades clip in and out easily, although they do feel quite lightweight and toy-like. It’s hard to imagine them effectively cutting when you first see them!

It’s clear that the design of this strimmer has been very well thought out. Terratek has crammed in multiple features, while still producing a strimmer that’s compact and lightweight. 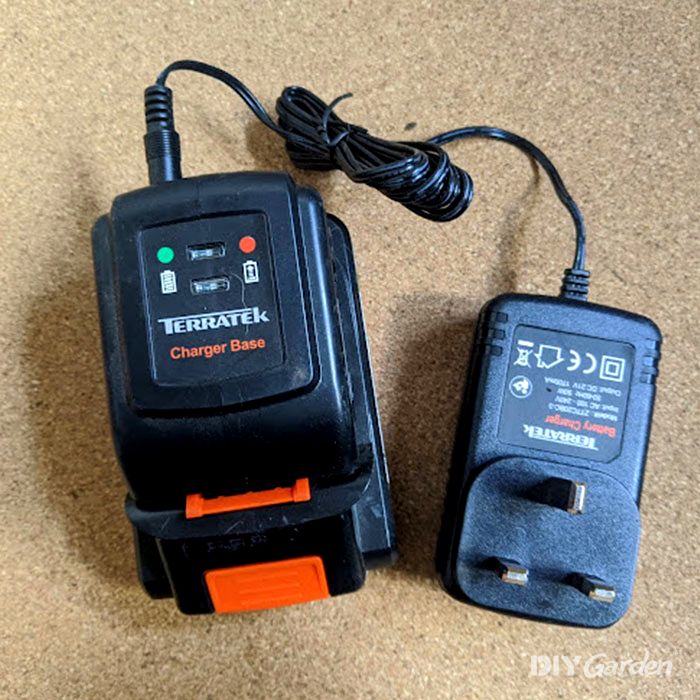 I was surprised to find that my Terratek strimmer came with two batteries, with each one being 1500 mAh. This was smaller than the other 2.0Ah strimmer batteries I tested – it works out to about 1.5Ah each. However, charge them both and use one after the other and you’ll end up with a longer runtime.

Since these were the smallest strimmer batteries I tested, I didn’t expect much in terms of battery life. However, I ended up being pleasantly surprised – each battery gave me about 30 minutes of strimming time. Combined, this allowed me to strim for an hour in total, which was longer than any of the other strimmers I tested.

On the downside, these batteries don’t have LED indicators to tell you how much life they have left. This can be quite inconvenient when you need to use the strimmer for long stretches of time. If this is something that’s important to you, consider increasing your budget slightly and treating yourself to the Bosch Advanced Cut 36 or the WORX GT 3.0 cordless strimmer. 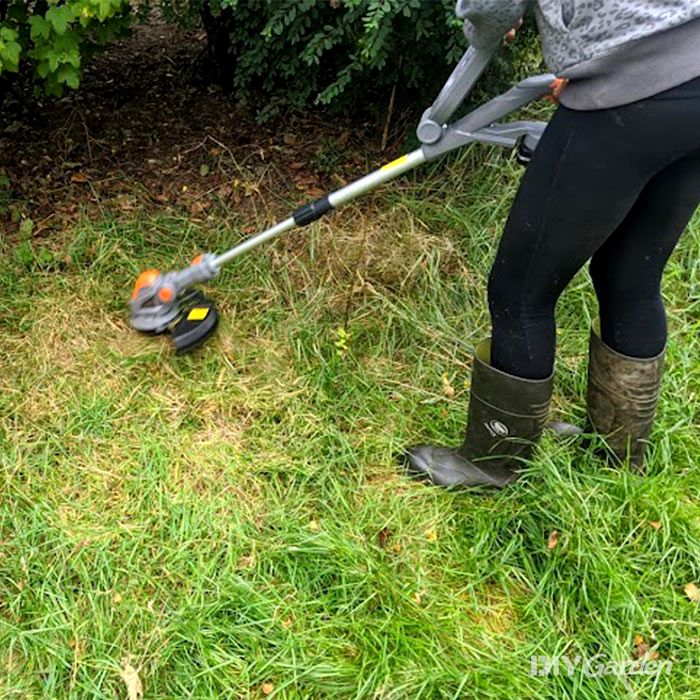 I started by testing the Terratek cordless strimmer on short, regularly maintained grass. It cut this just as well as the more powerful petrol strimmer I usually use – it was off to a good start!

The results were the same when I used the strimmer on longer grass. It left behind a neat, clean cut and didn’t clog up in the damper areas of my garden.

However, the problems began once I moved onto the weeds. Light weeds, such as willowherb and sparse, thin nettle stalks weren’t an issue, but the strimmer wasn’t able to handle thick vegetation. One of three things tended to happen; the blade would spin around uselessly and ignore the weeds, the blade would break, or the blade would just completely disappear into the depths of whichever wild patch I was tackling.

While the strimmer itself is powerful enough to cut thick vegetation, the blades aren’t. Unfortunately, stronger blades for this strimmer aren’t available. It’s worth noting that I used the Einhell GC-CT cordless strimmer, which also makes use of plastic blades, on similar weeds and it was able to handle those just fine.

Strangely enough, I experienced the same problem with the blades when using the strimmer’s edging function. Even though they were being used on grass, which the strimming function manages to do just fine, the blades seem to snap much more easily when edging.

This makes it harder to achieve a perfectly defined edge, as you’ll need to keep stopping to attach a new blade.

At just under 2kg, Terratek’s cordless strimmer is a lightweight tool that’s easy to carry. I was able to use it for a full hour without it feeling heavy, although the strimmer’s strong vibration does make it a little uncomfortable to hold for long periods of time.

The strimmer’s adjustable features help to make it more convenient to use. You don’t need to bend or stretch into awkward positions to strim hard-to-reach areas. Most of the time, the strimmer can be adjusted in a way that makes strimming these sections a breeze.

The Terratek cordless strimmer isn’t particularly loud. You could probably get away without using ear defenders for short stretches, although they would definitely be recommended if you plan on strimming for more than ten minutes. 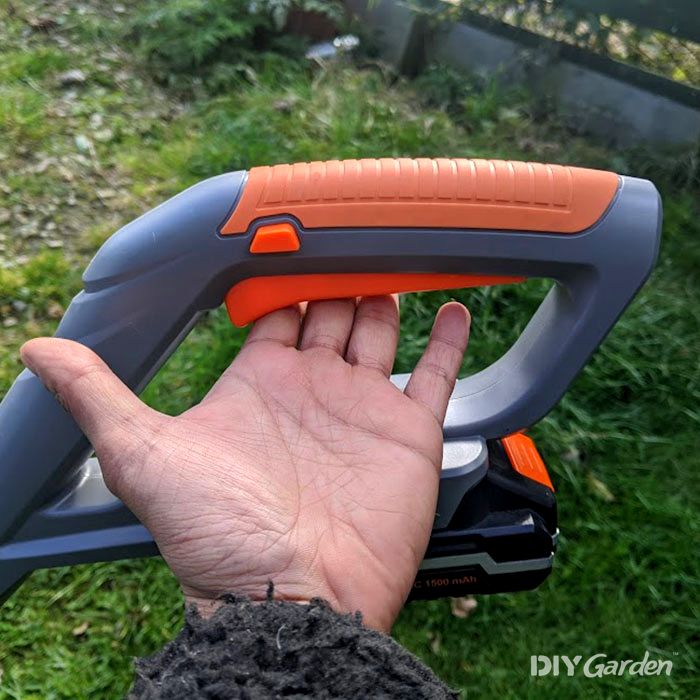 When it comes to safety, the Terratek cordless strimmer offers similar features to its competitors. There’s a button that needs to be pressed before the trigger can be pulled, which prevents anyone from accidentally turning the strimmer on. There’s also a solid guard in place to block stones from flying up and injuring the user.

However, this strimmer is really let down by its vibration. None of the other strimmers I tested vibrated quite so strongly, and it’s surprising that Terratek has let this slide. Those who aren’t familiar with strimmers might not see how this relates to safety, but all of that vibration can actually be quite dangerous, leading to a permanent medical condition called vibration white finger.

If value was based purely on features alone, then the Terratek Cordless Strimmer would seem like a fantastic buy. It’s jam-packed with customisable options, many of which higher-end strimmers don’t have.

It also comes with a two year warranty and 31 nylon blades (a packet of 30 plus an extra one already attached). 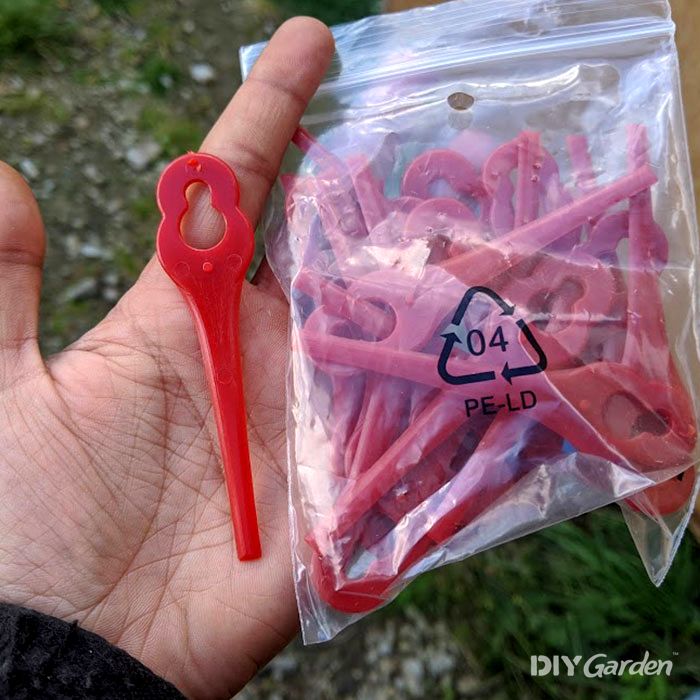 However, you then have to consider the downsides. Yes, it comes with 31 blades, but those blades break really easily. You’ll probably end up going through at least two or three blades in a 30-minute strimming session, maybe more. Replacements cost around £10 for 20 blades, which will quickly add up if you plan on strimming regularly. 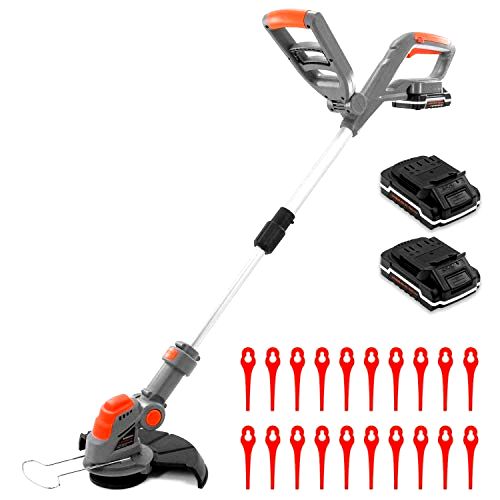