How to Grow Thick and Tender Rhubarb Stalks

Not only is rhubarb a vegetable that’s so easy and undemanding to grow, but its vivid red and pink stalks also look exceptionally striking in a garden. Loved for its distinctively tart flavour that adds a zing to sweet dishes, rhubarb is a beautifully versatile addition to both edible and ornamental gardens.

When to Sow – Feb-Apr

When to Plant – May-Jun

When to Harvest – Apr-Aug

How to Grow Rhubarb at Home 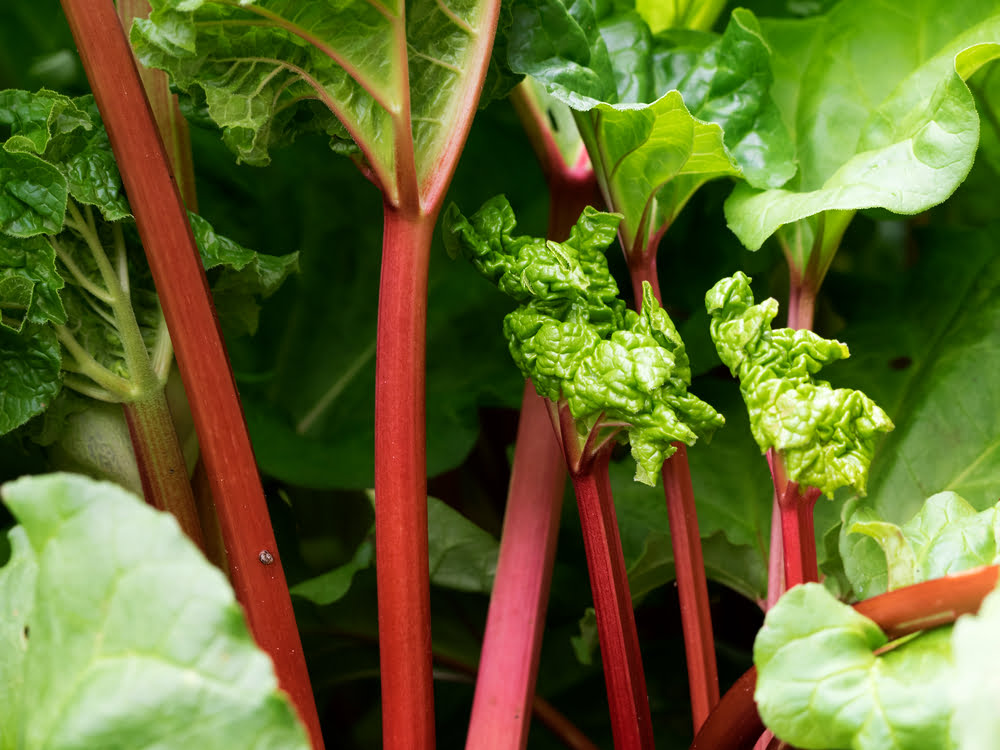 Considering how simple it is to grow, the price of rhubarb in supermarkets is shocking. Fortunately, so long as you have a small amount of space that you can dedicate to this perennial, you’ll easily be able to grow it at home and will be enjoying fresh rhubarb for several years to come.

Rhubarb is a cool-weather crop. It needs a cold winter snap in order to be productive – this allows the plant to burst into action come spring.

That being said, rhubarb still does best when given plenty of sun. It will tolerate partial shade too, but stalks will grow longer and thicker in full sun.

In addition to picking a sunny site for your rhubarb, make sure that this is also an area that doesn’t experience late winter frosts. Rhubarb will tolerate these just fine, but it does mean that young stems could end up damaged, leaving you to wait until later in the year for your first harvest.

While rhubarb is adaptable when it comes to soil pH, it requires a rich soil, ideally a mix that retains plenty of water. This also means that good drainage is also a must – waterlogged soils will quickly rot rhubarb crowns. Incorporating a large amount of organic matter into your planting area, with well-rotted animal manure being a fantastic choice, will help to improve both soil fertility and drainage.

Rhubarb is most commonly grown from crowns. These are established rhubarb plants, meaning that they’re at least one year old. Because of this, rhubarb grown from crowns can be harvested the first season after planting.

However, rhubarb seeds are much more cost-effective than purchasing crowns. You’ll need to wait two seasons after planting before picking any stalks, but you’ll save a fair bit of money.

How to Grow Rhubarb from Seed 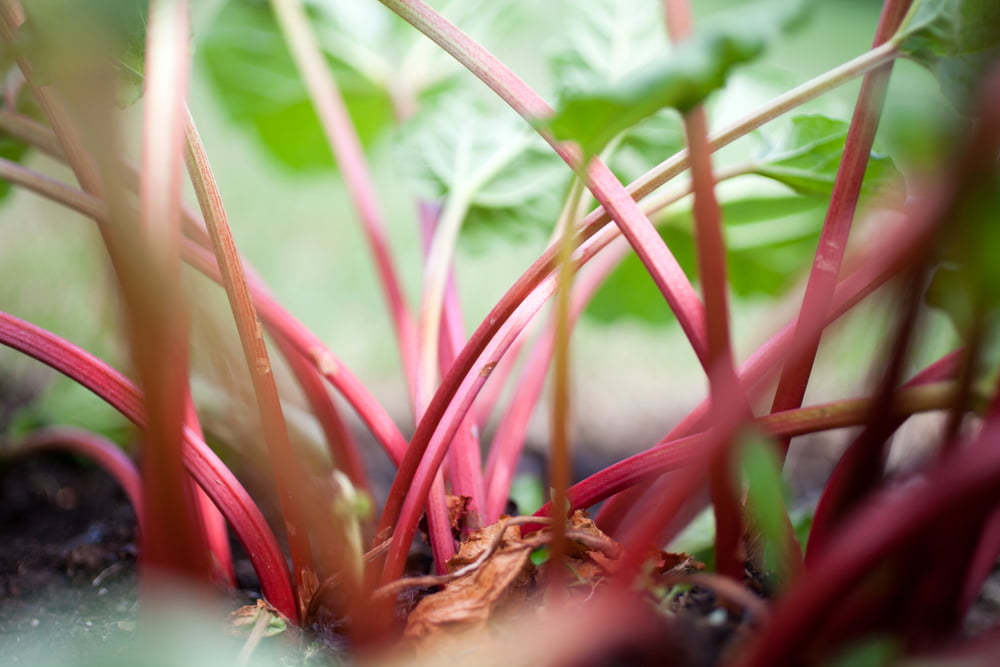 Rhubarb seeds should be sown about 8-10 weeks before your last frost.

The seeds are surrounded by a protective thin shell. While it’s not essential, soaking your seeds in some warm water for a few hours before sowing will help to break this shell down, which drastically speeds up germination.

Then, fill some 10cm pots with a quality compost. Make an indentation about 2-3cm deep in each pot, and then place a seed in before covering back over. Give your pots some water and then place them in a warm location. Rhubarb seeds germinate best when kept at 21°C. A heated propagator can be helpful for maintaining this temperature.

Keep your pots watered and warm and your rhubarb seeds should germinate in about one to two weeks. At this point, make sure that they are getting at least six hours of good sun a day.

Your rhubarb seedlings will produce long roots pretty quickly. You want to encourage this as much as possible, so make sure that you immediately transplant your rhubarb into larger pots if you notice roots emerging from the drainage holes at the bottom.

Give your seedlings plenty of light, water, and space and they should thrive.

How to Plant Rhubarb Outside

Unlike most other spring crops, rhubarb needs to be planted out before, rather than after, your last frost. Aim for two weeks prior, but don’t forget to also give yourself an extra week to harden your plants off.

At this stage, your plants could be anywhere between 7-15cm tall, with a few stalks and true leaves. If, for whatever reason, your plants don’t look as though they’ll be ready to go outside for a while yet, then you’ll need to grow them on in pots until the following year.

Once you’re ready to get planting, dig holes in your growing area, going for a similar size to the pots your plants are in now. Keep each planting hole 90-120cm apart – the more space you give each plant, the healthier it will be.

Place your plants into their new homes and then cover over with soil. Water thoroughly after planting. Your rhubarb will need its soil to be consistently moist to begin with.

If you’ve decided to grow your rhubarb from crowns instead of seeds, the planting process is similar.

Plant each crown at a depth that allows the tip of the crown to be visible above the soil surface, before packing them in well and watering.

How to Plant Rhubarb in a Greenhouse

Although a cool-weather crop, planting rhubarb in a greenhouse will give you an earlier harvest in the spring. However, chances are that you will only have space for a single rhubarb plant in your greenhouse, since they do take up quite a bit of prime growing room.

For this reason, it may be more convenient to grow your greenhouse rhubarb in a container. This gives you the opportunity to move it around your greenhouse throughout the year to accommodate other plants.

Since rhubarb has a deep and extensive root system, you’ll need to use a container large enough to allow for this. Go for something at least 50cm wide and deep, and make sure that you fill it with plenty of rich soil.

Keep in mind that rhubarb grown in a greenhouse will need to be watered much more frequently than rhubarb grown outside, especially if you’re growing it in a container.

How to Care for Rhubarb 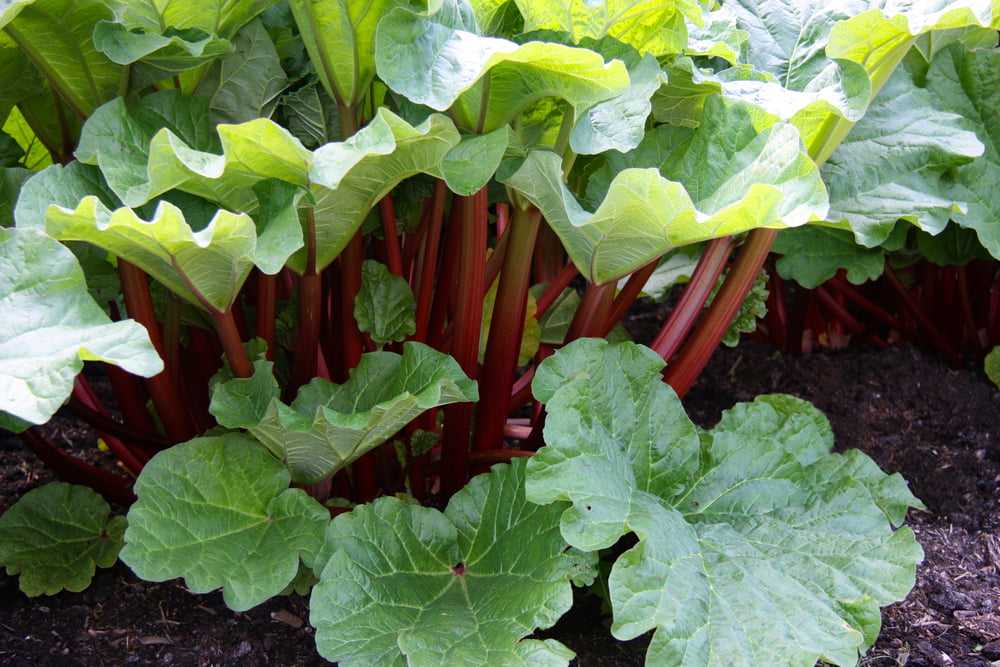 Once planted, rhubarb doesn’t need much in terms of care. Even if you left the plant alone, you would probably still end up with a decent crop the following season. However, if you’re looking to maximise your harvest as much as possible, then your rhubarb would benefit from some extra attention.

Rhubarb does best when kept consistently moist. Regularly check the soil about 10cm deep around your rhubarb plants – if it’s wet, hold off on the watering, but if it’s dry, your plants need more water.

Always try to water your rhubarb at its base, rather than from above. Wet rhubarb leaves become a prime target for pests and diseases, so keep the foliage as dry as possible.

If your rhubarb is growing in good, rich soil, then you most likely won’t need to fertilise it. An organic mulch, such as well-rotted animal manure or quality compost, can be applied as a top-dressing around your rhubarb plants in early spring instead.

However, if your soil is lacking, then applying a balanced, general-purpose fertiliser in early spring can be beneficial. Look for a slow-release formula in granular form that you can easily sprinkle onto the soil around your plants.

If you keep your rhubarb mulched, then you won’t have much weeding to do over the years. However, if you do notice weeds starting to appear around your rhubarb, it’s important to remove these immediately. Weeds will compete with your rhubarb plants for moisture, nutrients, and light, slowing down growth.

When weeding around your rhubarb, always be as gentle as possible. Rhubarb roots are quite shallow, so you don’t want to end up damaging the root system when pulling weeds out.

As the weather turns warmer, your rhubarb plants may end up producing flower stalks. If you leave these to grow, they will slow down productivity, not only for the current season, but for the following year too. Mature flower stalks will also affect the taste and texture of your harvested rhubarb, making them quite unpalatable.

As soon as you notice flower stalks forming, you need to cut them off. Use a sharp and clean knife to do this, cutting at the base of each flower stalk and then discarding.

Once your rhubarb has been around for a few years, you can try forcing one of your plants. This basically means placing a bucket or bin over the top of the crown in the winter, so that you are blocking any light from reaching the plant.

This pushes on new growth, giving you a much earlier spring harvest.

However, forcing rhubarb also weakens the plant. Once you’ve had your early harvest, it’s best to leave that plant alone for the rest of the season, allowing it to regain its strength. You should also refrain from forcing that same plant the following year. 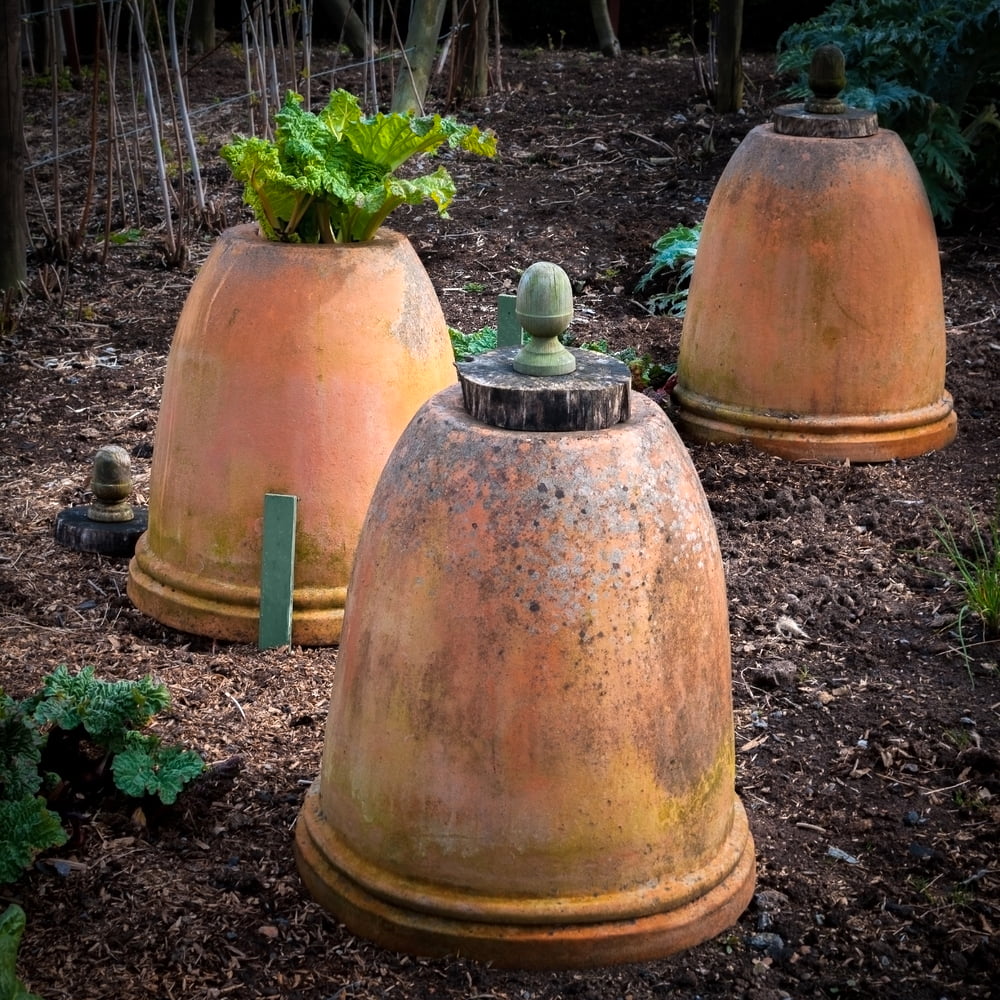 How to Harvest Rhubarb

Rhubarb stalks can be harvested while they are small, but, ideally, wait until they’re about 25cm in length. This will ensure that the plant is well-established for the season, allowing it to continue producing delicious new stalks throughout the spring and summer.

There are two ways to harvest rhubarb stalks:

Once you’ve picked your rhubarb, cut the leaves off and place these into your compost bin.

How to Store Rhubarb

Fresh rhubarb can be stored in the fridge for 3-4 weeks. Make sure that you don’t wash the stalks, but wrap them loosely in some tin foil instead.

If you would like to store your rhubarb for longer, it can be frozen. Simply chop the stalks up, lay them out in a single layer on a baking tray, and then freeze. Once frozen, you can place the pieces into a freezer bag. When stored in the freezer, rhubarb will keep for about a year.

How to Prepare & Cook Rhubarb 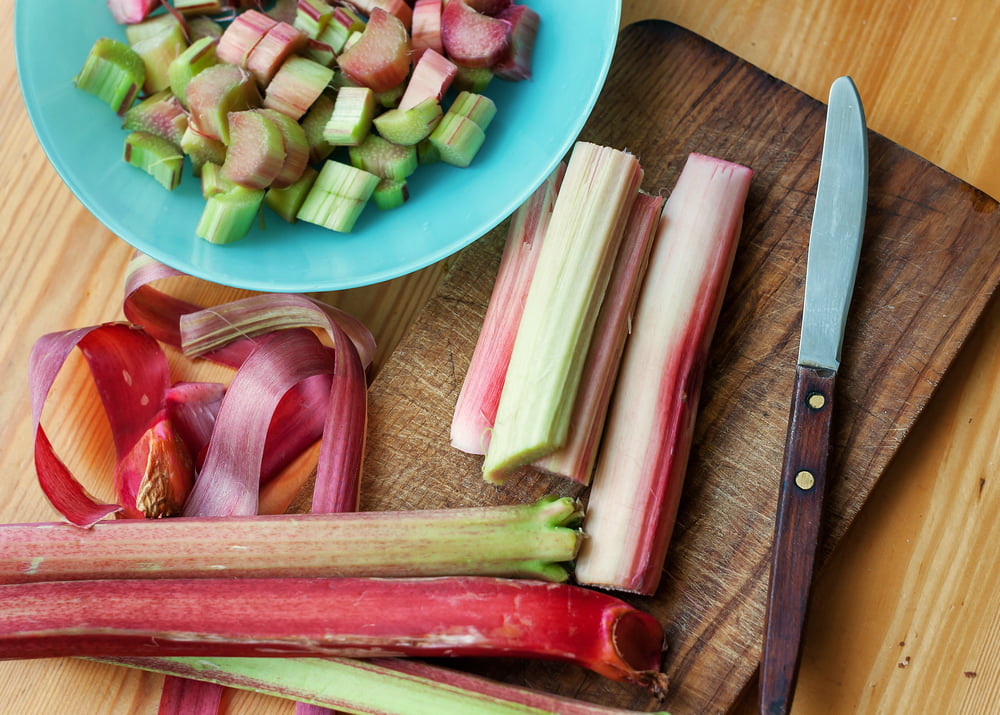 Early rhubarb stalks, or those that have been forced, don’t need much in terms of prep. They’re already super tender, so all you need to do is trim off the ends and then chop up the rhubarb as needed.

If you’ve picked your stalks later in the season, they will often have fibrous, stringy ribs attached to them. Use a sharp knife to strip these off, while also slicing off any brown spots, before chopping your rhubarb as needed.

Rhubarb breaks down quite quickly when cooked, so your chopped pieces don’t need to be too small.

Once you’ve prepared your rhubarb, there are several tasty dishes that you can cook with it, such as:

Although rhubarb is generally quite resistant to pests and diseases, there are a few that you may encounter over the years:

Picking a good mix of rhubarb varieties to grow will help to extend your growing season, while also giving you some diversity when it comes to flavour and colour.

Some of the most popular rhubarb varieties are:

Just about every gardener would agree that rhubarb is one of the easiest crops to grow, with delicious springtime harvests that are always appreciated after a long winter. Just a few rhubarb plants will likely give you more than enough stalks to last you for the year, making this vegetable a must-have in every garden.