One of the leading brands for garden tools, as well as one of my favourites, Bosch products are manufactured in Germany and are known for being high-quality and reliable. I’ve used lots of Bosch products in the past and have been happy with all of them, so I was excited to try their Advanced Grass Cut 36 cordless strimmer.

How I Tested The Bosch Advanced Grass Cut 36 Cordless Strimmer

The Bosch Advanced Grass Cut 36 was designed for a few different purposes; to cut grass, to cut untouched and overgrown weeds, and to tidy garden edges. So, I set aside a few areas of my farm to test the strimmer on – long grass and weeds around my driveway and fences, thicker weeds around my garden, and an area of vegetation that was so dense you couldn’t walk through it.

Our Verdict of The Bosch Advanced Grass Cut 36 Cordless Strimmer 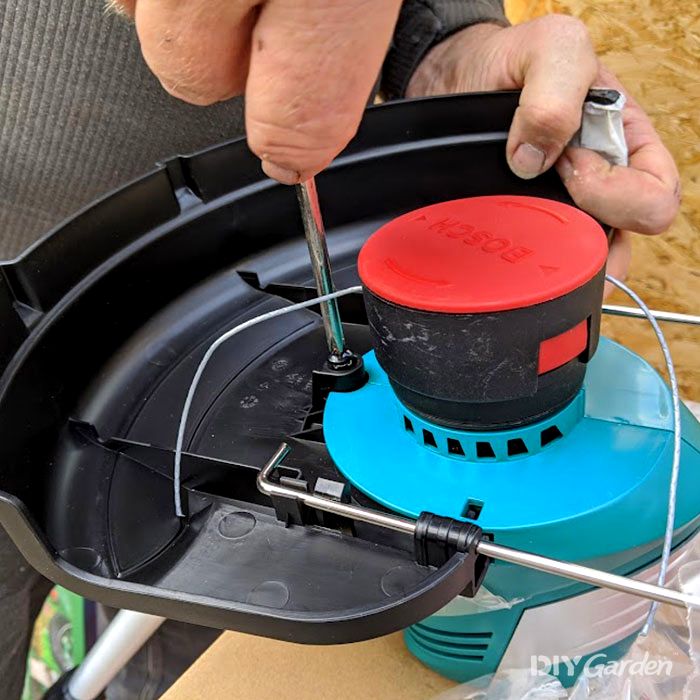 Just about every Bosch product that I have used in the past was easy to assemble – it’s something that I’ve always appreciated about the brand. So, I assumed that things would be the same when assembling the Advanced Grass Cut 36.

It started off well – the first step is to screw both sides of the shaft together. Then, the handle needs to be attached. However, this isn’t easy. It doesn’t simply click into place – you need to use a fair bit of force to get it into the right spot. If you don’t have strong hands, then you would struggle to assemble this strimmer.

Once the handle is in, you’ll need a Philips screwdriver to attach the guard. Once you’ve done that, the strimmer is good to go, since the cable reel is already in place. All in all, assembly took about 15 minutes. This was longer than the other strimmers I tested, but not significantly so. 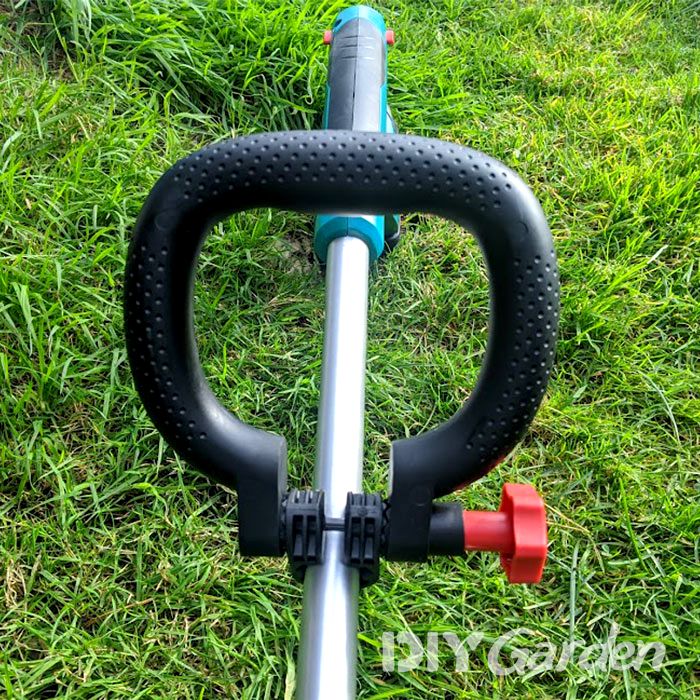 Bosch’s colours and branding are pretty iconic in the DIY world, and this strimmer fits in with that well. It sports the signature green and black Bosch colour palette, giving it a sturdy and professional look.

I appreciated this strimmer’s long shaft, although I was surprised that this wasn’t adjustable. This is a simple design feature that many of the lower-end strimmers I tested had. However, its secondary handle was fully adjustable, both in terms of position and angle.

The Bosch Advanced Grass Cut 36 has been designed with a 30cm cutting diameter, which is larger than the other strimmers I tested. This, combined with its dual-line cutting system and two speed settings, is what enables it to tackle thicker vegetation.

The strimmer also has an edging feature, which is useful for anyone looking to tidy up their lawns. There’s a button on the handle that enables you to switch between the strimming and edging functions.

It’s worth noting that while the strimmer has been designed to be used with a harness, Bosch doesn’t include one with this strimmer. This initially surprised me, but a little research taught me that the brand doesn’t actually produce strimmer harnesses.

Just like with the other strimmers I tested, this one also comes with a flower guard/plant protector. This can easily be removed if you don’t need it, and then clipped back in when you do.

The Bosch Advanced Grass Cut 36 comes with a 2.0Ah battery. However, if you already own a battery-powered Bosch tool, that battery will work with this strimmer too as they’re interchangeable.

It takes just over an hour to charge this 2.0Ah battery. Although some of the strimmer batteries I used were able to fully charge in less time, others took longer, meaning that this one sits somewhere in the middle.

Most Bosch batteries, including the one that came with this strimmer, have an LED indicator that shows battery life. Sadly, this drops down very quickly while strimming – the 2.0Ah battery only lasts for about 30-35 minutes.

What makes this even more frustrating is that the strimmer’s semi-automatic line feed function stops working once the battery is down to one bar, which is after 20-25 minutes of use. At this point, you’ll need to pull the line out manually if you want to continue using the strimmer for the remainder of its charge. 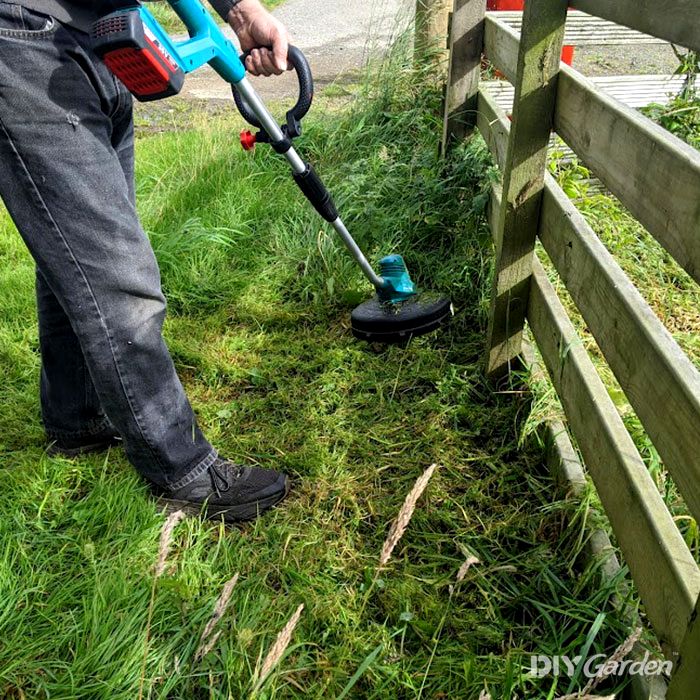 I started by using the strimmer on long grass and was very surprised when it quickly clogged up. I unblocked it, tried again, and the same thing happened, even with the strimmer on its highest speed setting. Bosch claims that this strimmer is designed for “untouched lawns”, but I would have to disagree. Even the cheapest strimmer I tested, the Terratek Cordless Strimmer, was able to handle long grass better than the Bosch.

So, I gave up on the grass for a while and moved onto some weeds. It made light work of the docks and nettles growing beside my fence, leaving behind a beautifully clean cut. The semi-automatic line feed feature was very useful – each time you stop, it releases 1cm of cable. This means that you don’t really need to think about the cable while strimming, but it does also mean that a fair bit of cable ends up wasted.

Once I moved onto thick weeds, the Bosch Advanced Grass Cut 36 struggled once again. It handled some without any problems – dense patches of willowherb, brambles, and thistles, for example. However, surprisingly, it wouldn’t cleanly cut thick nettles – these needed to be taken down in sections, rather than with one neat swipe. That said, it did manage to fully clear overgrown areas in the end.

After this, I tried the strimmer on short grass – areas that I already regularly strim. It cut this well, but this isn’t a noteworthy accomplishment – every strimmer that I tested was able to cut short grass.

I have to say that I didn’t think much of this strimmer at first, but it did start to impress me after I had used it for a while. If you stick to the weeds that it can easily cut through, it performs well and does a great job.

The strimmer’s edging function is a handy little feature if your lawn has defined edges. It leaves behind a straight line and gives the grass a professional finish.

This is what the strimmer’s lower speed setting is for, which I found interesting. Some of the other strimmers I tested also had an edging function, but without the speed change. The lower edging speed gives you more control over the task, resulting in a better-looking finish.

At 4kg, the Bosch Advanced Grass Cut 36 was the heaviest strimmer I tested. This isn’t a big deal if you’re only going to be using it for short periods of time, but anything longer than 15-20 minutes will leave you with aching arms. If you’re looking for something lighter, the Einhell GC-CT cordless strimmer that I tested weighs just 1.77kg.

If you were going to be investing in a bigger battery so that you could use the strimmer for longer periods, it would definitely be worth purchasing a harness too. Any generic shoulder harness should work fine with this strimmer.

Other than its weight, the strimmer was easy to manoeuvre, even around hard-to-reach areas. Being able to glance down to check battery life, without having to remove the battery first, is also very convenient.

The Bosch Advanced Grass Cut 36 is quite a loud machine, but not excessively so. However, ear defenders are definitely recommended, especially for long periods of strimming. 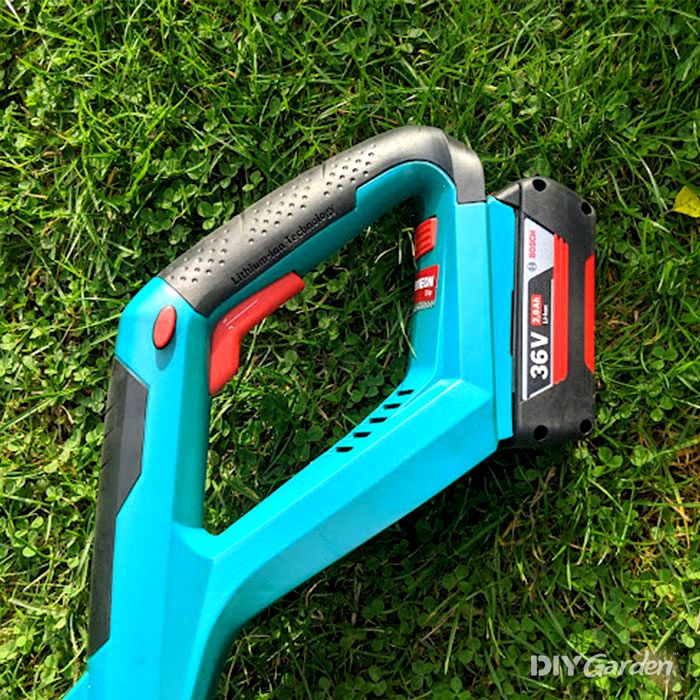 This isn’t great for those who are new to strimming, but I would imagine that this product is aimed at people who have some level of experience using strimmers. Personally, I appreciated the fact that Bosch didn’t cover this product in neon-coloured stickers.

One great safety feature that this strimmer has is a button that you need to press in order to pull the trigger. This saves you from accidentally turning the strimmer on.

As with just about every other strimmer out there, this one also has a plastic guard to prevent debris from flying up and hitting you in the face. Unlike some of the other strimmers I tested, the Bosch Advanced Grass Cut 36 isn’t littered with safety stickers.

Compared to the other strimmers I tested, the Bosch Advanced Grass Cut 36 comes in at the highest price – it’s more than three times the cost of some of its competitors. You’ll be able to save some money if you already have Bosch batteries and can purchase the unit without one, but this strimmer is still a significant investment.

Fair enough, it comes with a full reel of line, plus a two year guarantee from a reputable brand, but I would have to say that this strimmer doesn’t offer great value for money. There are cheaper options out there that do a better job on long grass, such as the Einhell or the WORX. Alternatively, if you have a bigger budget, you’ll find good petrol strimmers for an equivalent price, and these will give you enough power to cope with the vegetation that the Bosch struggles with. 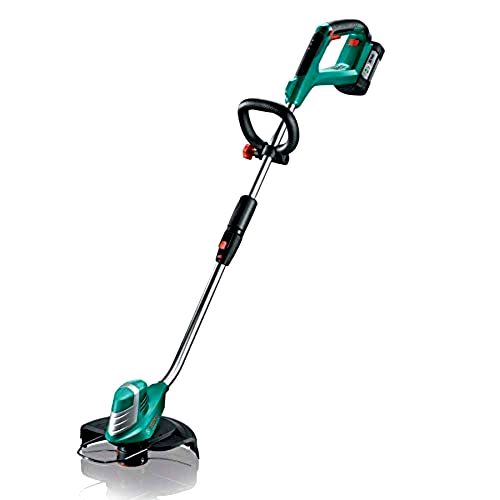