How to Grow Tender Leeks with Thick, White Stems

Leeks are one of the few vegetables that can be harvested over the winter, making them a popular choice for gardens and allotments. Homegrown leeks are also noticeably sweeter and more tender than their commercially-grown alternatives, while also being a reliable crop that doesn’t require much attention or expertise.

When to Plant – Apr-Jul

How to Grow Leeks at Home 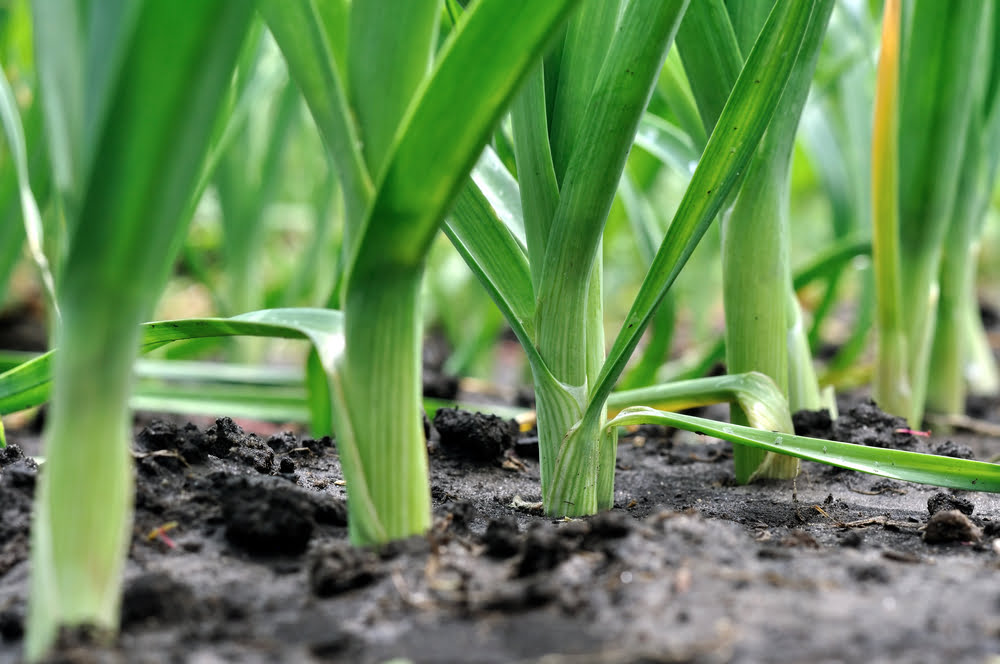 Leeks are such an easy vegetable to grow at home. Although they’re slow-growing, they don’t need much care once they have been planted out, so long as you’re able to meet their basic requirements.

Leeks do best in sunny and open sites, but they’ll grow in partial shade too. They’re extremely hardy, so you won’t need to worry about winter frosts and freezes affecting your harvest.

Although quite tolerant when it comes to soil type, try to plant your leeks in soil that’s fertile, but not overly rich. If your soil is too rich, you’ll end up with lots of tough, leafy growth, without any of that beautiful tender stem.

This is why many gardeners plant their leeks into beds that have previously had potatoes in them. The soil was enriched for the potatoes, but will have lightened up by the time the leeks go in. However, if you decide to do this, give the soil a couple of weeks to settle after harvesting your potatoes – leeks prefer firm soil.

Try to also avoid planting your leeks into any beds that have just had leeks growing in them. This spreads disease, making it important to practice crop rotation. Traditionally, leeks follow on from cabbages, lettuces, and peas.

How to Grow Leeks from Seed 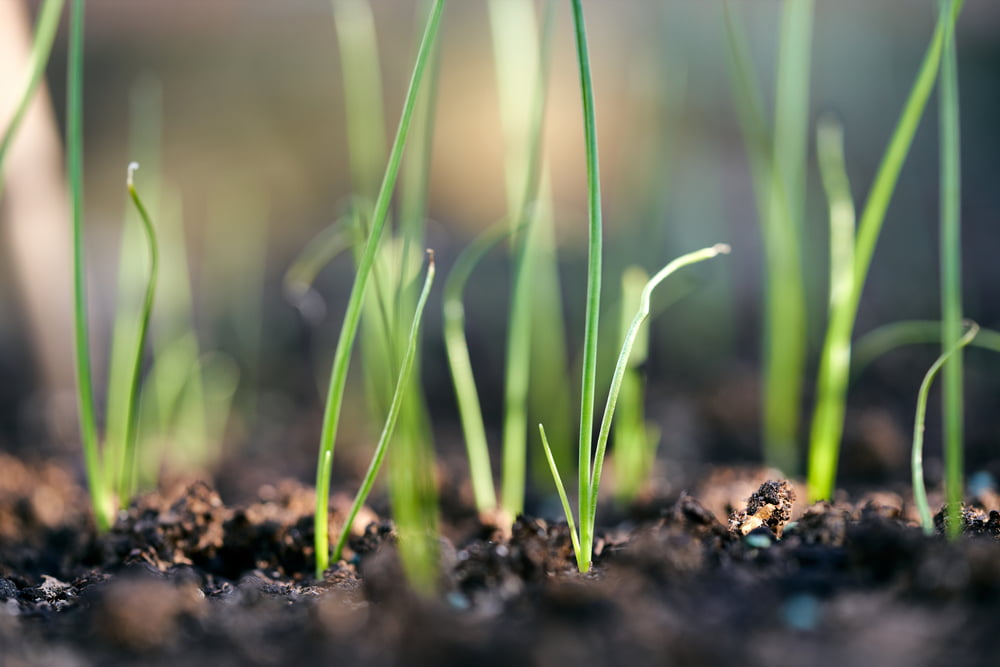 Although leeks can be direct sown in the spring, they take a while to mature. Since they require a prime growing site, most gardeners choose to start their leeks off in modules or containers. The young plants will then be moved outside early in the summer, once other spring crops have been harvested.

When starting leek seeds, it’s best to use module trays to minimise root disturbance when planting out. Although your leek seeds will germinate in a standard, multi-purpose compost, they’ll do better in a finer and lighter mix. Try combining sieved compost with some perlite or sand to achieve this.

How to Sow Leek Seeds in Modules:

Temperature isn’t too important when germinating leek seeds – they’ll sprout at anywhere between 7°C to 32°C. However, the optimum germination temperature is 21°C, with this dropping by a few degrees at night, making a windowsill in your home a good location.

Keep the trays consistently damp – they should never be allowed to dry out.

It will take between two to three weeks for your leek seeds to germinate. Once they do, give them a week or so to grow before thinning them down to one seedling per module.

Once they have germinated, thin your seedlings out to leave about 5cm of space between each plant. You’ll need to thin them out again in a few weeks to give each leek 10-15cm of space. Don’t be tempted to thin them to 15cm too early on – some may end up dying due to the weather or pests, so it’s always best to leave extra seedlings in as insurance.

How to Plant Leeks Outside

Once your leeks are about 15-20cm in height, they’re ready to be planted out.

Before planting your leeks out, you’ll need to first acclimatise them to their new environment by hardening them off.

Leeks are planted a little differently than other vegetables. You’ll need a dibber, or any long and rounded piece of wood that’s about 3cm in diameter.

Poke your dibber into the soil to create holes that are about 15cm deep. Space each hole about 15cm apart.

You’ll now need to place each leek into a hole. Try to interfere with them as little as possible – simply drop each seedling, root downwards, into a hole.

If the roots are too long and are preventing the plants from sitting in their holes properly, try twisting them as you drop them. Alternatively, give the roots a little trim so that they’re no longer than 10cm.

Now for the important part – don’t fill the holes in!

Instead, grab your watering can or garden hose and fill the holes in with water. This will dislodge enough soil to cover over the roots, while also helping to blanch the stem as it grows.

Of course, you could also plant leeks in the same way that you do other plants, without ensuring that the stem is at a certain depth. However, the part of the stem that grows underground is the coveted white part of the leek that tastes the best. Grow your leeks too far up and you’ll miss out on that.

How to Plant Leeks in a Greenhouse

Leeks aren’t commonly grown in a greenhouse. Since they take up quite a bit of space and are also happy to adapt to weather extremes, most gardeners choose to grow their leeks outdoors.

That being said, a greenhouse is still extremely useful when starting leek seeds in trays. They provide a protected, frost-free environment that’s warm during the day but cooler at night – exactly what leek seeds and seedlings need to thrive!

How to Care for Leeks

While leeks may take their time to mature, they don’t need much care or attention as they do so. Make sure that their basic needs are met and you’ll be able to pretty much forget about them until harvest time.

Leeks need about 2.5cm of water a week. Rainfall usually provides this, although manual top-ups may be required during dry spells. Don’t forget that leek roots are shallow, so your leeks will dry out faster than other vegetables in your garden.

The most important aspect to watering leeks is to keep things consistent. Inconsistent watering will lead to tough stems, so try to maintain soil moisture levels.

When it comes to nitrogen, leeks are heavy feeders. For the biggest yields, apply a slow-release, general-purpose fertiliser a couple of weeks after planting your leeks out. Continue feeding them every few weeks until harvest time.

As mentioned, leeks usually require a large quantity of nutrients. Even just a few weeds popping up in the soil around your leeks can interfere with this, making it important to keep your growing area weed-free.

However, you don’t want to be constantly weeding around your leeks and disturbing their shallow roots either. This is where a mulch comes in – not only will this suppress weeds, but it also helps to regulate soil moisture and temperature, while feeding the soil as it breaks down.

Shredded leaves, grass clippings, and straw all work well as a leek mulch. Lay this around your plants soon after planting them out, making sure that the mulch doesn’t fill the hole that you dibbed.

How to Harvest Leeks 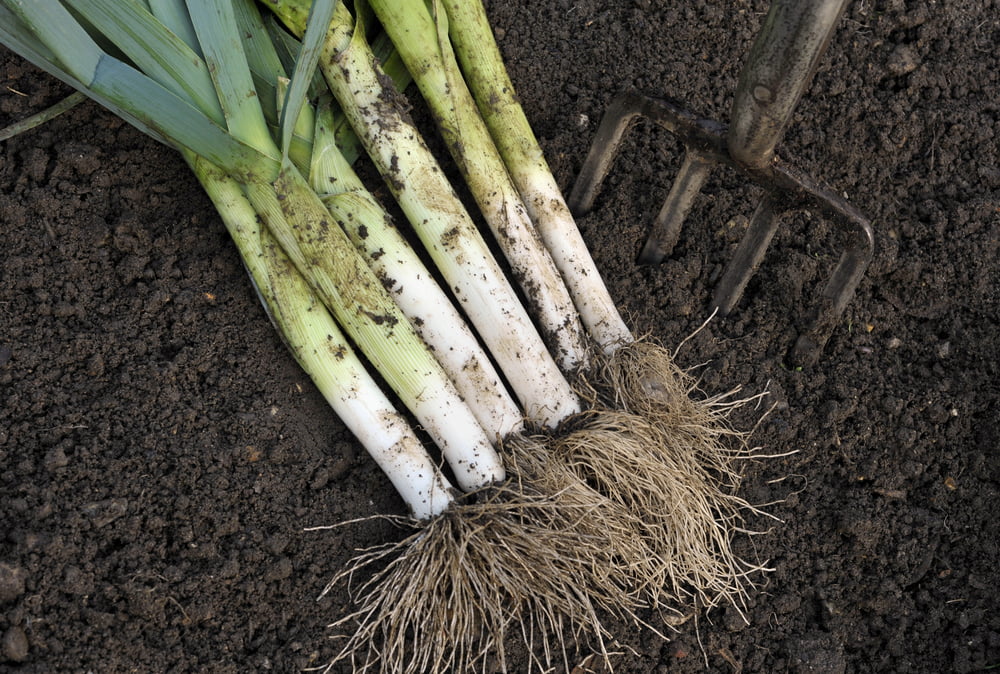 Leeks are ready to be harvested as soon as they’re pencil-thin, so it’s completely up to you when you harvest them. That being said, many choose to harvest a few smaller leeks at the start of the season, but then leave them to mature and grow until the autumn/winter.

To harvest a leek, insert a garden fork underneath it and gently lever it upwards. Keep your other hand on the leaves and slowly pull the leek out.

How to Store Leeks

Leeks taste best when used fresh. However, you can also wrap them in a damp paper towel and then place them into a perforated plastic bag – this way, they’ll keep for a week or two in the fridge.

Leeks can also be frozen for up to 10 months. To do this, you’ll need to:

While it’s useful having a leek supply in the freezer, get your timings right and you’ll be able to harvest fresh leeks almost all year-round, meaning that long-term storage options won’t be necessary.

How to Prepare & Cook Leeks 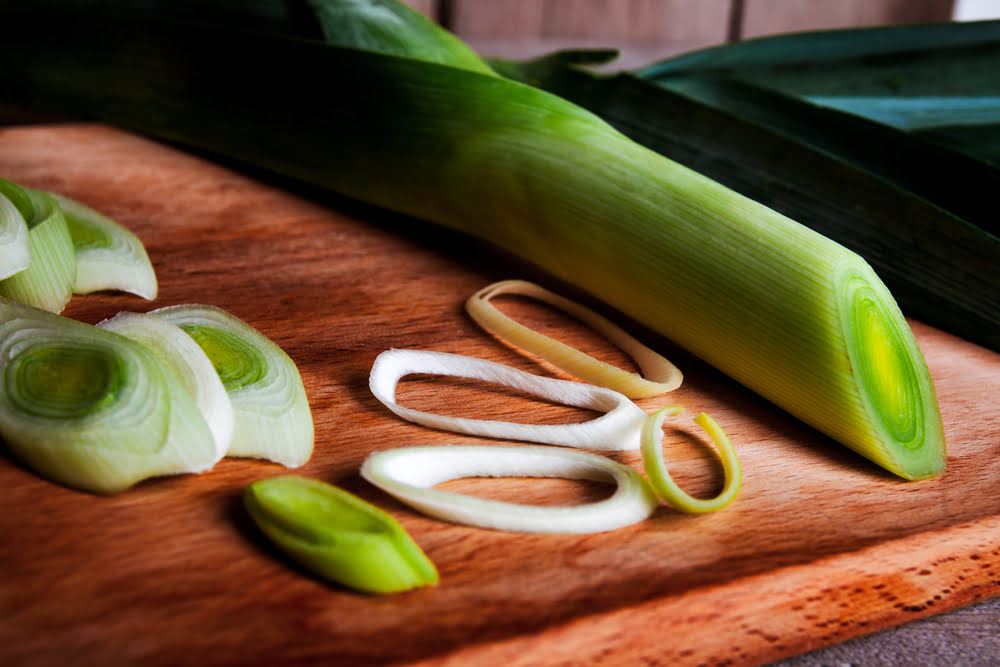 To prepare your freshly-harvested leeks, you’ll first need to trim off their roots, along with the very coarse, dark green leaves right at the top. These can be saved and added to homemade stocks.

Then, slice each leek in half lengthways to expose all of its layers. Even though the leek may have seemed clean on the outside, you’ll now notice small bits of dirt wedged in those layers.

To clean it, hold each sliced leek under running water. Use your fingers to fan through the layers, ensuring that any dirt is washed away. Leave your leeks to drain before slicing or dicing as required.

Although leeks have an onion-like taste, they’re much milder and sweeter. They’re mellow yet sophisticated, giving them a fantastic versatility in the kitchen. A few dishes that you could cook up to showcase your homegrown leek harvest are:

Generally quite hardy and resilient, leeks don’t usually succumb to pests and diseases. However, a few to be aware of include:

Leeks can be split into three categories, depending on when they should be harvested; summer, autumn, and winter. Here are some of the best varieties for each:

Growing your own leeks means that you’ll be able to enjoy freshly harvested food even in the midst of winter, which is always a rewarding feeling. As an added bonus, they’ll taste better and will be so much more nutrient-dense than anything you would find at a supermarket, even though they’re such a low-maintenance vegetable to grow. What more could you want?