The Norse SK25i Portable Pressure Washer is a popular cordless pressure washer, designed by a team of Norwegian engineers. I put it to the test to see just how well this product has been crafted…

How I Tested The Norse SK25i Portable Pressure Washer

I used the Norse SK25i on the following items to see how well it cleaned them:

Our Verdict of The Norse SK25i Portable Pressure Washer 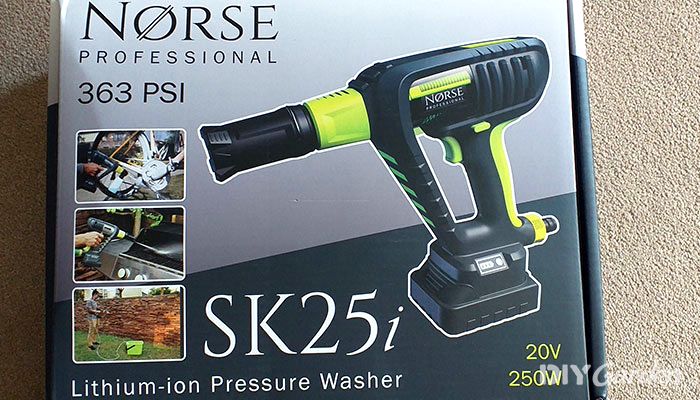 I like this Norwegian design a lot. It looks smart in the box with its dark-green and yellow colour scheme.

Of course, I know that good looks won’t make a difference to the performance; but, because it looks well made, it makes me view the pressure washer favourably from the offset. After all, if they’ve put effort into the appearance, surely it’s gone into the workings too? Let’s see!

It has 363 PSI which equates to 25 bar, making this is the most powerful jet washer I’m testing.

The battery is a 20-volt lithium-ion battery that easily slips into the charger. The charger runs off mains electricity.

The ‘turbo’ isn’t something that features on all power washers. You can achieve double the standard power with this setting, twisting the nozzle around until there is a double click.

Plus, this Norse SK25i has a self-priming feature meaning water emerges much faster than with other models. It comes out almost instantly. This is really quick compared to some other washers that I tested; for example, the Yard Force Aquajet takes about 45 seconds to get going.

In terms of durability, I went for another ‘drop test’ (dropping the washer from shoulder height) and it didn’t break; however, the bodywork did get a little scuffed.

My main complaint is that the battery only lasts 10 minutes, so you have to be pretty efficient when working.

Overall though, I’m impressed. Especially in terms of power, this is an excellent pressure washer that comes out on par with the WORX Hydroshot – a machine which I thought was unbeatable.

At first glance, there are several extra bits in the box that can seem a little daunting. Fortunately, the instruction manual is very comprehensive and clear, so there are no problems with assembly.

There are two extension lances, as well as an extra hose which allows water to be sourced from a bottle.

You can choose to use just one lance, or connect the two together to give extra reach. They’re all clearly labelled and easy to connect.

Once the battery is charged and the lance connected, it’s simply a case of fitting the filter onto the hose, and connecting the hose to the gun. If you want to use the detergent bottle, it’s also easy to attach.

There is a safety button which needs to be depressed before you can use the trigger to release water.

The water comes out instantaneously with almost no delay.

One final point about putting together the Norse SK25i: it uses couplings that clip on, and then screw in tight, to keep everything waterproof. This ‘belt and braces’ double-security approach is not replicated by any of the the other cordless pressure washers I tested. It gives a bit of added confidence that it won’t leak. 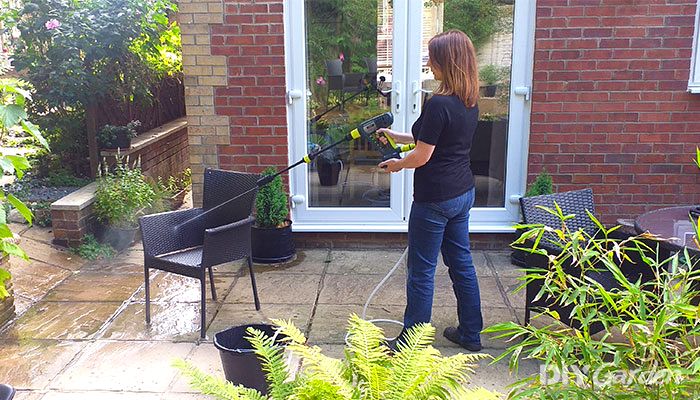 Here’s a list of the different items I cleaned using the Norse SK25i and how the washer performed:

Bike: It did an excellent job on the bike mostly due to the detergent container which meant I didn’t have to cover the bike with any ‘muc off’ first.

The 60° spray was enough to remove crusty mud from moving parts, and the pencil jet removed dirt from tyre grips without any problems.

My husband is torn between this and the Hydroshot for bike work – they both seem to work as efficiently as each other.

Garden Tools: Cleaned no problem. I like having the extra length of the two lances for cleaning muddy tools. You can avoid a lot of the spray back which seems to happen often when cleaning garden tools with lots of angled surfaces.

Pets: There’s too much force to use on an animal so I didn’t try it. Don’t use this to clean your pets.

Car: The windows and paint work were all nicely cleaned by the 60° spray, and I used the detergent bottle at the same time. I did have to refill it several times, to give the car an all-over clean. as it ran out relatively quickly.

Patio Algae: The turbo setting certainly gave it some oomph and a lot of algae was removed with the pencil jet; however, it’s not powerful enough to remove black spots or clean large areas.

Windows: The extra-long lance meant I could reach higher without having to lift the water source, and the detergent bottle worked a treat.

Wheelie Bin: Cleaned thoroughly without having to scrub with my hands so that’s an excellent result.

The power provided by the 20-volt battery is quite impressive, even on the standard-power mode. Then there’s the extra turbo function which allows the Norse SK25i to do a great job of cleaning tough, dried-on messes.

When I was using it, I found that the water jet shot out over 4 metres. With the extra lance length you could easily reach 5 metres without stretching – guttering here we come!

It’s perfectly OK for daytime use without disturbing the neighbours and I didn’t need ear defenders, but no friends will be gained by using it in the early morning or late evening.

It has a safety button to depress before the gun will work. This seems standard on jet washers and stops them from being activated accidentally.

Seeing as this pressure washer screws together, it should be somewhat easier to manage than clip-lock couplings if you have arthritic hands. Less awkward movements are required to get the pieces together.

Two things missing are a plastic clip to stop the hose leaving the bucket and a buoy to keep the filter pointing downward.

Sucking air into the internals for too long won’t do it any good, so I used a bulldog clip to keep it in place, for want of a supplied clip.

This isn’t the most expensive washer that I tested, yet it still offers good quality and good value. In general, for the amount paid, I think it has a desirable mix of power, performance and versatility. It seems to be the best cordless portable pressure washer for water pressure as well.

It’s capable of producing a strong jet and efficiently cleaning a variety of different surfaces. The one let down is the battery power – 10 minutes is not a lot of time to get a job done and does require a certain amount of pre-planning to work out how to best approach a task. 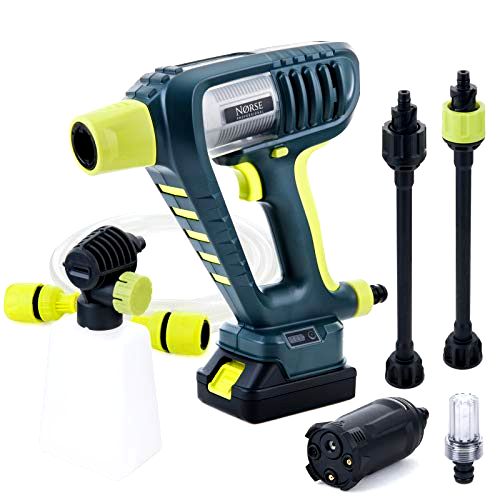