The Yard Force Aquajet Cordless Pressure Washer is a popular budget option with a lot of included accessories. I put it to the test to see how well it cleaned, and just how useful the extras really are…

I used the Yard Force Aquajet on the following items to see how well it cleaned them: 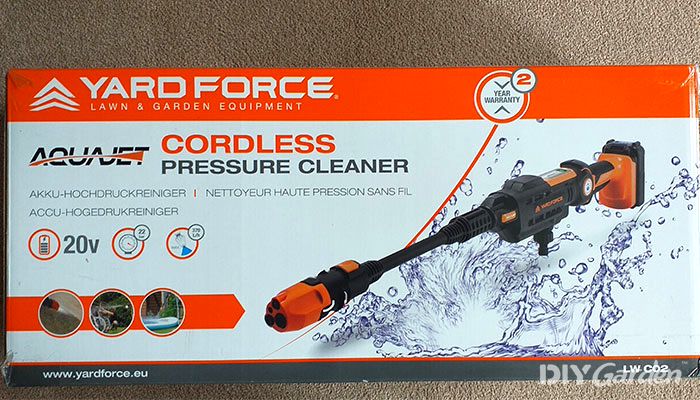 The Yard Force Aquajet is a good-looking piece of kit, designed in stylish black and orange. The branding is similar to the Worx Hydroshot and it looks sleek and professional.

This is a 20-volt pressure washer with 22 bar of pressure. This is on par with the Hydroshot and Yard Force models, though less powerful than the Norse (25 bar).

It has a 6-metre hose with an integral filter and a 3-setting nozzle. On the top of the washer is a button marked ‘ECO’ which can be used to reduce the pressure.

It’s ergonomically designed, with a two-position handle for comfort, and comes with a brush attachment, a detergent bottle, and fold-flat bucket.

The accessories are excellent. The brush attachment was especially good for cleaning patio furniture and bikes.

Plus, it’s robust: when I dropped it from shoulder height everything stayed in place and there were no breakages.

It’s a simple affair to piece this pressure washer together. Everything fits together easily using ‘clip-lock’ couplings.

If you want to use the brush attachment, it clips straight into the gun without the extension lance.

Once the washer is ready to be used, you just need to depress the safety button and pull the trigger. It takes about 30 seconds for water to appear.

A couple of things to note when it comes to assembly:

Although it fits together well, and doesn’t leak, it’s difficult to get it apart again. A lot of the pieces are a bit clunky and tight fitting.

For example, I thought it was broken to begin with because I couldn’t get the power on, but it turned out that the safety button needs pressing hard and the trigger is stiff.

I would also say that it was hard to get the filter and the hose pieces to attach as the coupling mechanisms were stiff too. Therefore, I wouldn’t recommend this for folk with weak hands or arthritis. 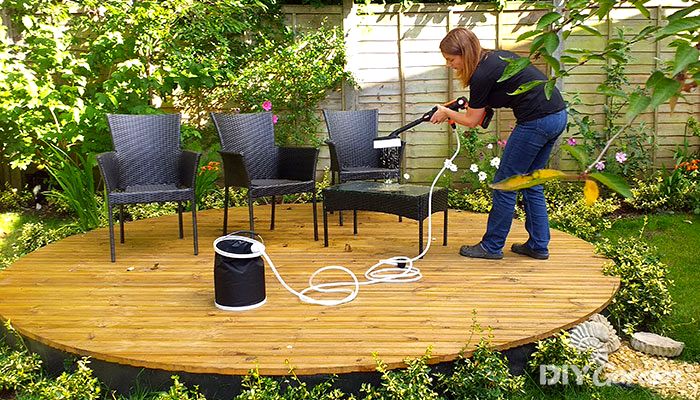 Battery: An hour’s charge for 20 minutes, although it ran out after 15 minutes for me.

Here’s a list of the different items I cleaned using the Yard Force Aquajet and how the washer performed:

Bike: I needed to crank up the pressure to the highest degree to shift mud, but the brush did a good job of removing the worst of muddy messes.

It’s not as good as getting into the nooks and crannies on the chain or tyres as the Norse SK25i or the WORX Hydroshot. Without the brush attachment I wouldn’t rate it for bike work.

Muddy Boots: No problems at all, they were all cleaned with minimal effort and freshened up my hiking boots nicely.

I stepped in a stagnant puddle earlier in the day and this pressure washer did a good of cleaning out the insides.

Garden Tools: The pressure seems low in this machine even when you turn off the ‘ECO’ mode.

That said, it did a pretty good job of washing off soil. The finer jets got rid of baked-on bits.

Pets: It’s not suitable for pets. For starters, it’s much too loud. But also, the softest spray has a wide angle so you’re more likely to spray the surrounding area than the dog’s paw. It’s just more chaos than it’s worth, and using a bottle of water to rinse them off would be easier.

Car: Good on the car especially with the brush attachment.

I was more relaxed about using this on the car’s body than most of other other pressure washers. The pressure settings aren’t as hard as other models and the ECO button made the jets even softer.

It struggles to remove encrusted mud on wheel arches, but pollen dust and fly bits were removed just fine.

Patio Furniture: It worked well in general, but struggled on bird mess until the brush was deployed (you might be sensing a theme here) – using the brush to agitate the caked-on mess certainly helped. The brush does a good job of cleaning patio table glass as well.

Patio Algae: Not a hope, even the pencil jet on high pressure boost wouldn’t shift anything.

Windows: The brush and detergent worked well. I think the lower pressure settings result in a better clean and the brush removed the smaller pieces.

I think this would do a great job in a greenhouse, especially if you’d worry that high pressure would damage the more fragile glass.

Wheelie bin: It did an OK job on another neighbour’s wheelie bin. The stains and dried on mess weren’t shifted well, but it got rid of most general muck.

It’s got 20 volts of power behind it, and the jet gets more powerful when you turn off the ECO mode. However, whilst water does come out at speed, it doesn’t seem as powerful as other models.

The jet doesn’t reach quite as far, and tough stains and algae don’t budge.

This is definitely the nosiest of the five portable pressure washers I tested.

This pressure washer is high pitched and pretty loud. You’ll probably think twice before using early in the day or late in the evening. For reference, you have to shout to be heard over it.

The only real issue could be the design making it look like a toy to kids. My 10-year-old got excited and thought it was a Nerf blaster on first look.

This may cause a problem with children wanting to play, but to be honest the safety catch is so hard to depress and the trigger is so stiff that they’d struggle to get it going.

This is one of the pricier machines and I think, unless you really want a brush and a detergent bottle included, it’s a bit overpriced.

There’s nothing wrong with this pressure washer – but there’s nothing outstanding either. I’d like to see more pressure settings and easier to manage couplings. 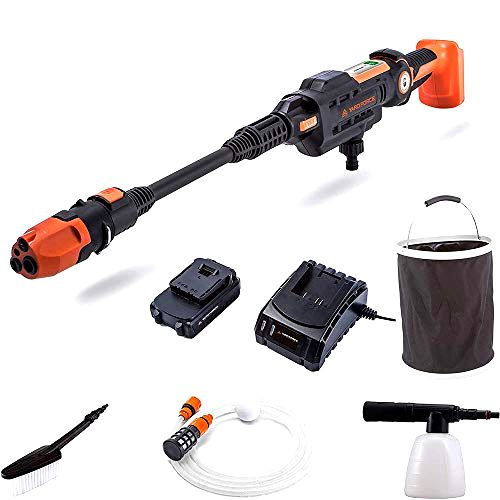