Grass snakes are totally harmless, but it’s fair to say the majority of us would be shocked and scared to see one swimming across the pond or disappearing into the flower border.

Don’t be scared – this guide will give you all the information you need about grass snakes, including what to do if you’re lucky enough to spot one.

What Is A Grass Snake? 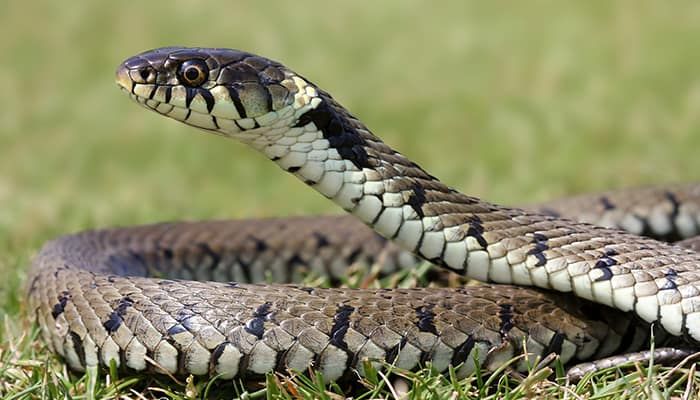 It’s a harmless snake that can reach over a metre in length and live for 25 years.

Grass snakes have round pupils and range in colour from green to brown with black stripes on their sides and a white belly. They also have a yellow and black collar at the back of their heads.

They inhabit most of Europe, Central Asia and North Africa, but haven’t been found in Scotland, Northern Ireland, and most of the Channel Islands – which may come as a relief to some of you!

What Snakes Are There In Britain?

Britain is home to four kinds of native snake, but only one of them is poisonous. That’s the adder and despite its scary reputation it’s pretty rare that people are bitten. In fact, the last UK fatality from an adder was in 1975.

Here are our slippery friends:

It was only in 2017 that the barred grass snake became a distinct species in its own right. We’re still learning about these fascinating reptiles.

What’s The Difference Between A Grass Snake And An Adder? 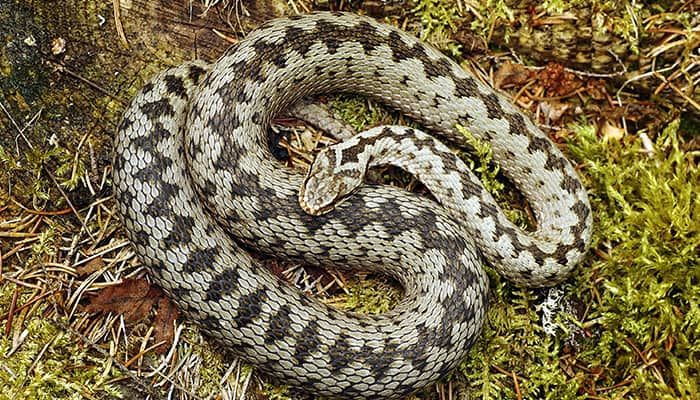 Adders are poisonous and although their venom is meant for small rodents anyone bitten by an adder should see a doctor straight away.

Adders have a very distinctive V or X shape on their heads and a zigzag running down their length. If you get close, and that isn’t recommended at all, they have a slit pupil instead of a round one like the harmless grass snake.

Both snakes are solitary animals and don’t gather in nests no matter what you’ve seen on Facebook viral videos.

Is A Slow Worm A Grass Snake?

No, they are totally different species.

A slow worm is just an odd name for a legless lizard. It’s not a snake (or a worm) at all.

Slow worms are coloured bronze, grey, or brown and only reach 50cms fully grown. Their scales are smooth rather than overlapped, and they may drop 1/3 of their tail when scared. It’s an amazing trick that helps them escape from predators.

Slow worms are often mistaken for snakes. The best way to tell which is which, if you haven’t run a mile, is to watch and see if it blinks. Snakes don’t blink, but slow worms do! 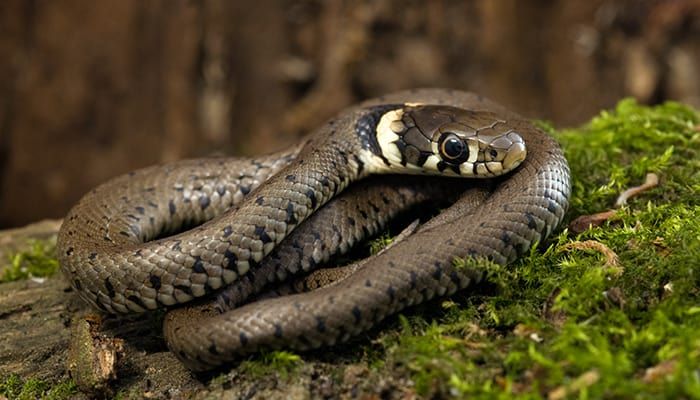 Not at all. They’re harmless reptiles without venom or the ability to constrict, but they may put on a show if you threaten them.

Grass snakes are capable of puffing up, hissing, and striking with a closed mouth. This is usually enough to terrify any human but may not put off an intrepid cat or dog.

In this case the snake will play dead. He will lie on his back with mouth wide open and tongue hanging out. It’s an Oscar-worthy performance that convinces predators to leave him alone.

If he’s provoked even further, such as being picked up, he’ll release a disgusting fluid that really stinks.

Grass Snakes Are Protected By Law

All native snakes and reptiles in the UK are protected by the Wildlife and Countryside Act. It’s illegal to kill, injure, or sell them.

Where Do They Live?

Grass snakes prefer damp areas with long grass, plenty of prey, and safe hiding places so they tend to favour areas close to ponds, rivers, ditches, and canals. They are comfy in drier areas like hedgerows and woodlands too.

Grass snakes love basking in the sun to warm up. You might see one lying in a sunny spot getting up enough energy for hunting – or maybe he’s just enjoying life, who knows!

Throughout the winter, when it’s too cold for reptiles, all of our native snakes hibernate. That’s usually from October to March but it’s entirely weather dependent. Grass snakes like to hibernate in old rabbit warrens, holes in walls, or anywhere that’s sheltered and dry.

Their eggs are creamy-white leathery ovals rather than the hard-shelled chicken eggs we’re used to seeing.

The best place for a mother to leave her eggs is inside a compost heap, beneath rotting leaves, or tucked within a tangle of riverside reeds. It’s because decomposing plant matter creates heat, and heat helps hatch those eggs effectively.

A female can lay 30-40 eggs if it’s a warm spring and her baby snakes hatch out ten weeks later looking just like pencils.

In contrast, adders don’t lay eggs but incubate them internally. If you find eggs in your compost heap, they will be harmless grass snake eggs. Do the kind thing and leave them alone.

What Do They Eat? 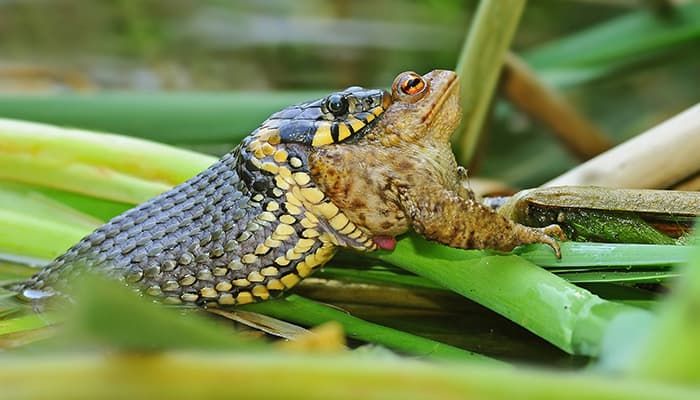 Grass snakes hunt on land and water taking whatever is seasonally available.

In spring they catch fish, tadpoles, and even tuck into frogspawn. During the summer frogs and toads are their main prey along with newts. Any amphibians are fair game! Grass snakes will also hunt voles and mice if the going gets tough.

Because their favourite meal is a frog a garden pond is a great way to attract them, especially in spring when snakes wake up from hibernation and feel particularly hungry.

Do They Have Any Predators?

Yes, quite a few animals prey on grass snakes.

Predators include dogs, cats, foxes, weasels, mink, badgers, large birds such as herons, crows, magpies, and domestic chickens. Even the humble hedgehog will snack on a grass snake.

It seems odd to think a friendly hog could attack and eat a large snake, but Mrs Tiggy-Winkle is ferocious and a grass snake is too good a meal to pass up.

Alongside predators there are other dangers out there for grass snakes. Our roads claim plenty of casualties, but the main source of injury is netting.

Grass snakes can squeeze their heads through gaps in netting, but their fatter bodies get stuck fast. They can’t go backwards and moving around to try and escape just entangles them further.

Always pick up your old netting and check what’s in use every day without fail. If you find a live grass snake in netting, place a towel over the snake and cut it free leaving plenty of room. Take it to a wildlife rescue who will know how to save it.

If you remove the netting completely it’ll leave cuts which may get infected and lead to a slow, painful death. This goes for any wildlife you find tangled in garden or football goal netting.

Perhaps you feel a little sorry for grass snakes now? I do!

What Should I Do If There’s A Grass Snake In My Garden? 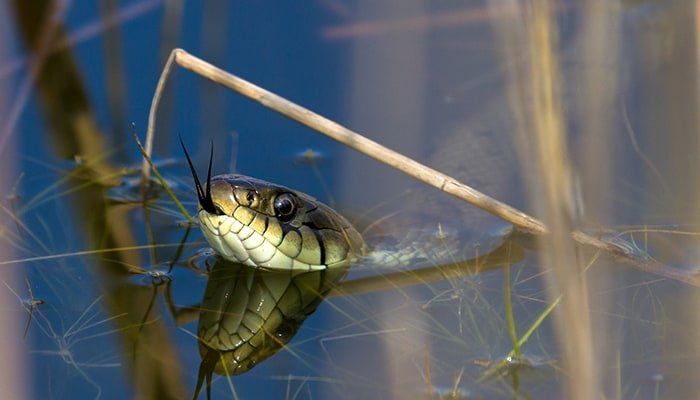 With so many predators on their case, it’s a hard knock life for Miss Hiss to keep body and soul together.

All our native snakes try to avoid human contact and who can blame them?

If you’re lucky enough to spot a ‘snake’ in your garden it’s likely to be a slow worm because they are more common, but if you live in a semi-rural area with a pond or long grass then don’t be surprised to see a large green-brown snake passing by.

I’ve spotted them in the late evening around my pond – grass snakes are proficient swimmers and hunt in the water. It’s always a shock to see them, but a nice shock!

If you spot one just leave it alone. Remember it’s illegal to hurt them and it’s probably just passing through, totally afraid of you and just looking for something to eat.

But I Want It Gone!

It’s against the law to harm UK snakes, but there are ways to make your garden less appealing. Keep your grass short, make noise, avoid compost heaps, and don’t have a pond.

I think that’s a crying shame because they couldn’t hurt you even if they tried, and if you have grass snake squatters your outdoor space must be a wildlife haven. Not everyone can claim that.

Snakes are kept as exotic pets and they can escape on occasion. Harmless corn snakes, which are usually red in colour, are famously known as ‘the escape snake’. Plenty of people dump snakes when they get bored with them too.

If you spot an unusual snake try to get a photo and call the RSPCA who may retrieve it and scan for a microchip.

Why Not Support Our Native Grass Snake?

I hope this guide has helped you understand our native grass snakes a little better. If you spot one there’s no need for hiss-terics (*groan*).

Life is hard enough already for our wildlife what with habitats disappearing and food and water sources shirking away.

You’ve got to feel for our snakes – they are maligned, screamed at, and called names like ‘Stab Noodle’ or ‘Tube of Death’ but there’s no need to be rude!

Grass snakes are just getting on with life like the rest of us. The best course of action is to stand back, admire, and leave them in peace. 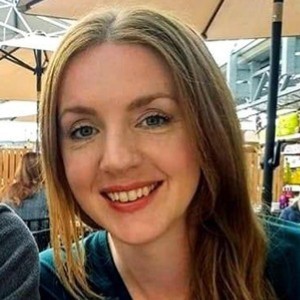