Punchy, peppery, and delicious both raw and cooked, rocket tends to be a vegetable garden favourite. Even better, it’s extremely easy to grow – sow your seeds successionally and you could be harvesting rocket leaves for the majority of the year.

When to Plant – Apr-Oct

When to Harvest – May-Dec

How to Grow Rocket at Home 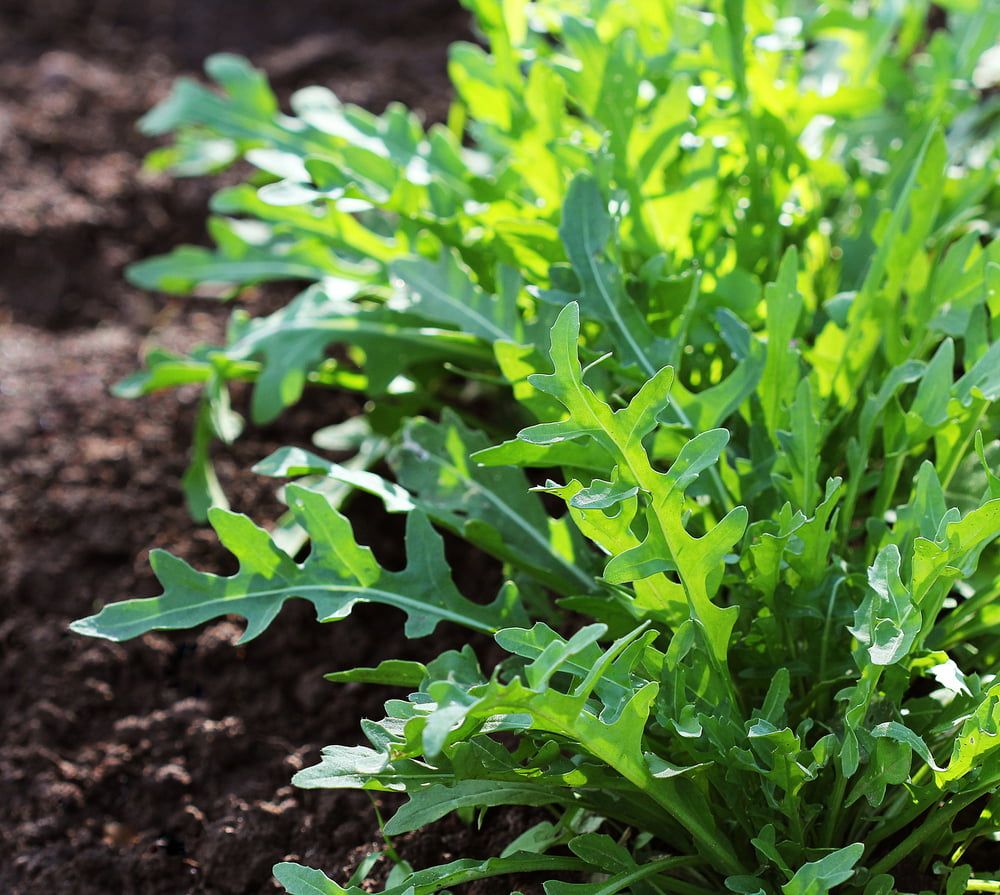 If you’ve never grown rocket before but have seen the price of commercially-produced rocket on supermarket shelves, it would be easy to think that this was a difficult crop to cultivate. However, this cool season leafy green is a fast-grower that doesn’t ask for much – provide it with the basics and you’ll soon be enjoying regular harvests.

Rocket does well in both full sun and partial shade. However, it’s important to take your climate into account when choosing a growing location. Too much heat in combination with full sun will cause your plants to bolt before you’ve had the chance to harvest them. If you live in a hot climate, give your plants some afternoon shade.

In terms of soil, rocket isn’t fussy. It prefers a well-draining mix, but will happily grow in just about anything, with the exception of heavy clay.

One thing to keep in mind is that rocket is a member of the brassica family. In order to prevent diseases from building up, try to avoid growing it in an area that recently grew another brassica.

How to Grow Rocket from Seed 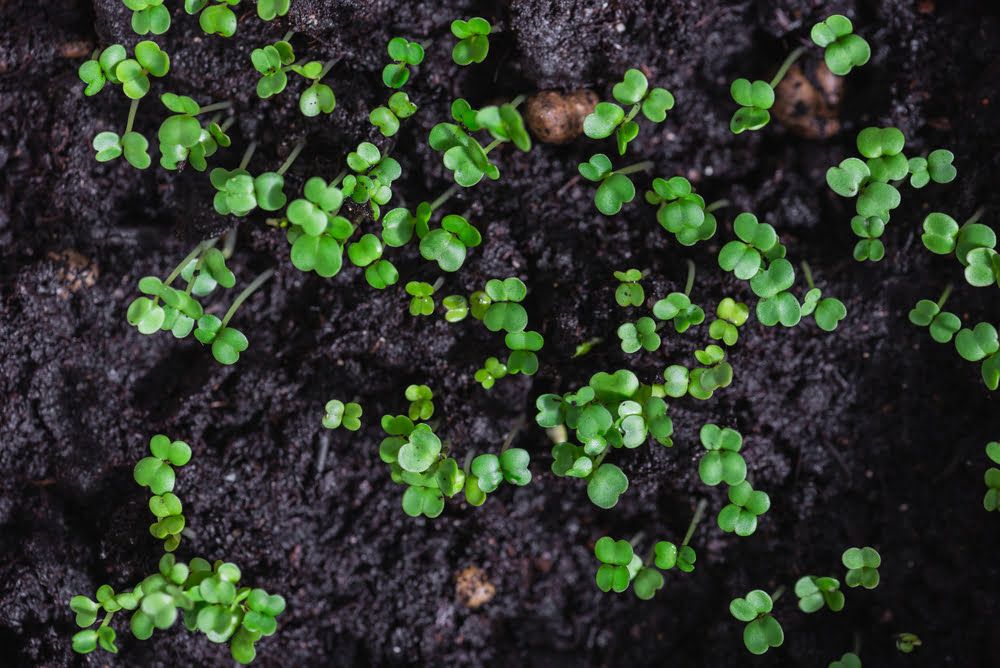 Rocket grows quickly from seed and is a great plant to successionally sow. Aim for about five plants per person in your household, and sow enough seeds to provide this every two weeks.

While rocket does well when direct-sown, late frosts can decimate tender young seedlings. For this reason, most gardeners sow an early crop of seeds under cover, before moving later sowings outside.

How to Sow Rocket Seeds in Modules:

It usually takes less than a week for rocket seeds to germinate. Once they do, move your trays somewhere bright and keep your seedlings moist. Thin your seedlings out so that there’s just one in each module.

How to Direct Sow Rocket Seeds:

Once your rocket seeds germinate, give the seedlings a couple of weeks to grow before thinning them out to a final spacing of 15cm.

How to Plant Rocket Outside 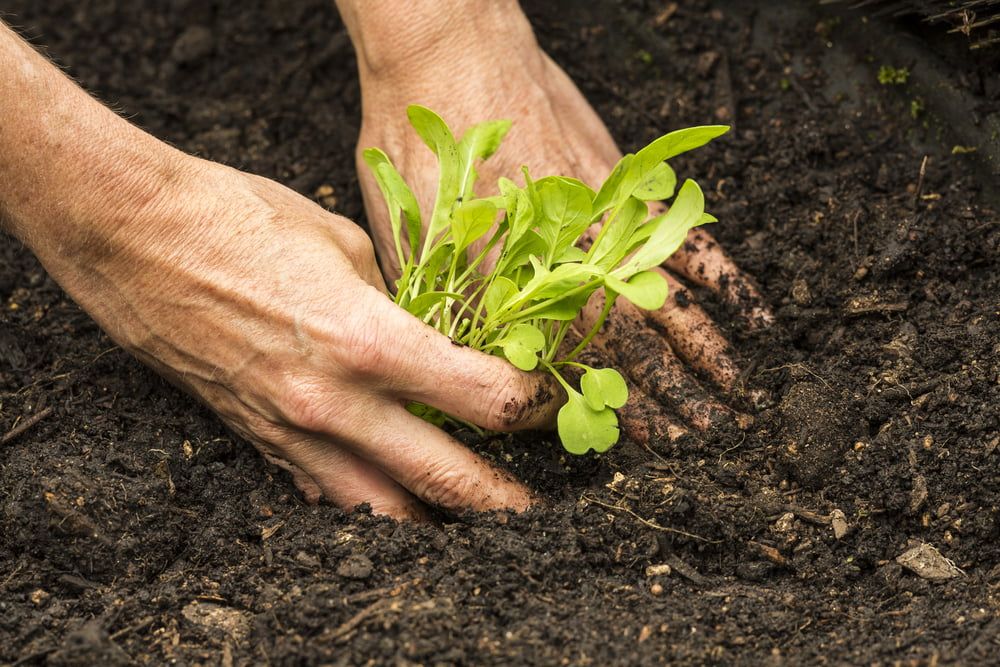 Once you’ve had your last spring frost, your indoor-sown rocket seedlings can be planted outside. However, before you do this, you’ll need to harden your seedlings off for a week to help prevent transplant shock.

Once your seedlings have acclimatised to outdoor conditions, prepare your growing area, making sure that it’s weed-free. Dig small holes in the ground, about 15cm apart. Don’t be tempted to go for a smaller spacing – overcrowding your rocket plants will cause them to bolt. The holes that you dig don’t need to be too big – just slightly wider and deeper than the root balls of your seedlings is ideal.

Be very careful when removing your seedlings from their modules. Rocket produces a long and thin taproot – damage this and your plants will struggle to establish. Remove as much of the soil surrounding the roots as possible, and place the entire root ball into its new home. Cover over with soil, gently firm down, and then give your seedlings some water.

How to Plant Rocket in a Greenhouse

Rocket does well in a greenhouse during the cooler months of the year. A greenhouse enables you to harvest your plants earlier in the spring, and can extend autumn harvests well into the winter. However, a greenhouse isn’t great for summertime harvests – the heat causes the plants to bolt.

You could also consider growing your rocket in pots. Sow your seeds directly into larger containers but keep them in your greenhouse until the weather warms up. If you decide to do this, go for containers that are at least 10-15cm deep.

How to Care for Rocket 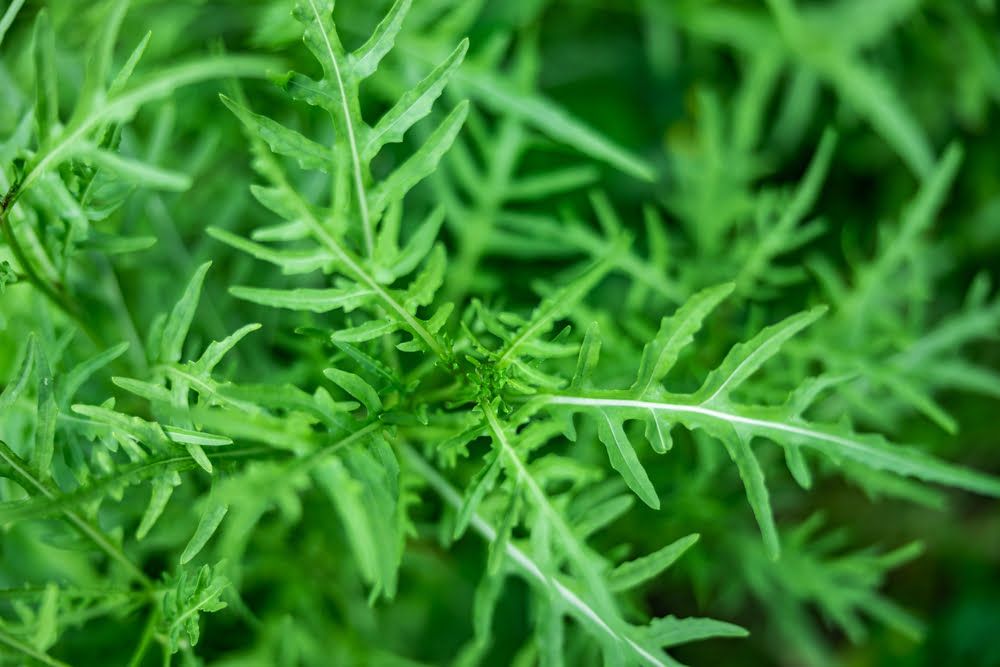 Rocket doesn’t require much in terms of care. However, if you want your plants to be as bushy as possible and don’t want to deal with bolting, a little extra attention is always helpful:

Rocket needs to be kept consistently moist in order for those leaves to retain their flavour. Ideally, water your plants whenever the top 3cm of soil feels dry. This could mean daily, or even twice-daily, waterings during the summer, compared to watering just once or twice a week in the autumn.

Try to water your rocket as consistently as possible to prevent your plants from bolting.

Although rocket doesn’t need a fertiliser, feeding your plants once or twice during the growing season can help to encourage leafy growth. However, don’t go overboard with this as too much fertiliser will affect flavour.

Ideally, give your growing area some well-rotted animal manure either before or just after planting your rocket out. You could also apply an organic, general-purpose fertiliser, such as liquid seaweed, a month or so into the growing season.

Rocket doesn’t grow particularly large or bushy, meaning that weeds can quickly smother young plants out. In order to give your plants the best chance, you’ll need to keep their growing area weed-free.

To save yourself from hours of back-breaking weeding, consider laying a mulch around your rocket plants. Use an organic mulch, as this will also feed your soil as it breaks down.

After your rocket plants have been growing for a while, they’ll start to produce flower buds. This is a sign that your plants are coming to an end – they’ll focus all of their energy on producing flowers and seeds, at the expense of leaves. The leaves are still edible once the plants have flowered, but they’ll be much tougher and more bitter.

One way to extend your harvesting period is to pinch off any flower buds that appear. Ideally, do this before the flowers actually open up.

However, don’t worry if you miss your chance and you find your rocket plants covered in white flowers. Those flowers have a very similar taste to the leaves and can be used as a peppery garnish for dishes. Plus, if you’ve been sowing your seeds successionally, your next batch of rocket plants should now be ready for harvesting.

How to Harvest Rocket 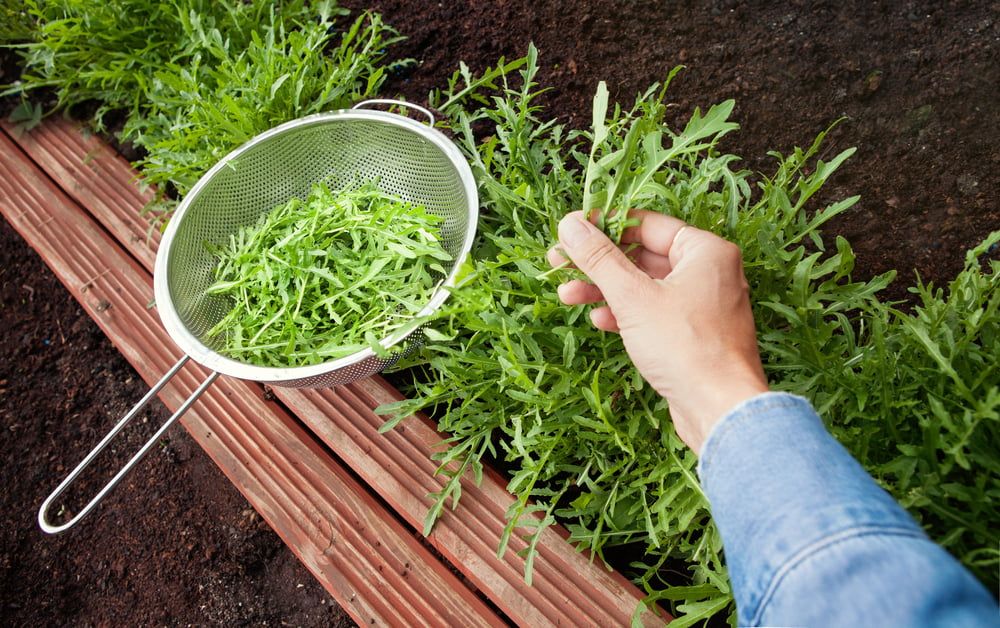 Rocket is usually ready to be harvested about 4-6 weeks after sowing. That said, you may be able to snip off younger leaves before this.

Either way, harvest the leaves as and when needed. Pick a few leaves from each plant, rather than completely stripping a single plant, which would inhibit growth. The more you pick the leaves, the more leaves your plants will produce.

How to Store Rocket

Just like other salad greens, rocket can be a little tricky to store. One popular method is to line an airtight container with paper towels. Then, wash and dry the rocket before placing it into the container, and then storing the container in the fridge. The paper towels will help to absorb any moisture that the leaves release, keeping them good to use for up to four days.

If long-term storage is what you’re after, consider freezing your harvest. Keep in mind that, no matter how well you prepare them, the leaves will still be pretty mushy once defrosted. This doesn’t mean that they can’t be used – they’ll still be great for pestos and cooked dishes, but won’t have the right texture for a salad.

To freeze rocket leaves, start by washing and drying them. Then, lay them onto a flat tray and flash freeze them for a few hours. Once the leaves have frozen, move them into an airtight bag or container. They’ll keep in the freezer for 3-6 months.

How to Prepare & Cook Rocket 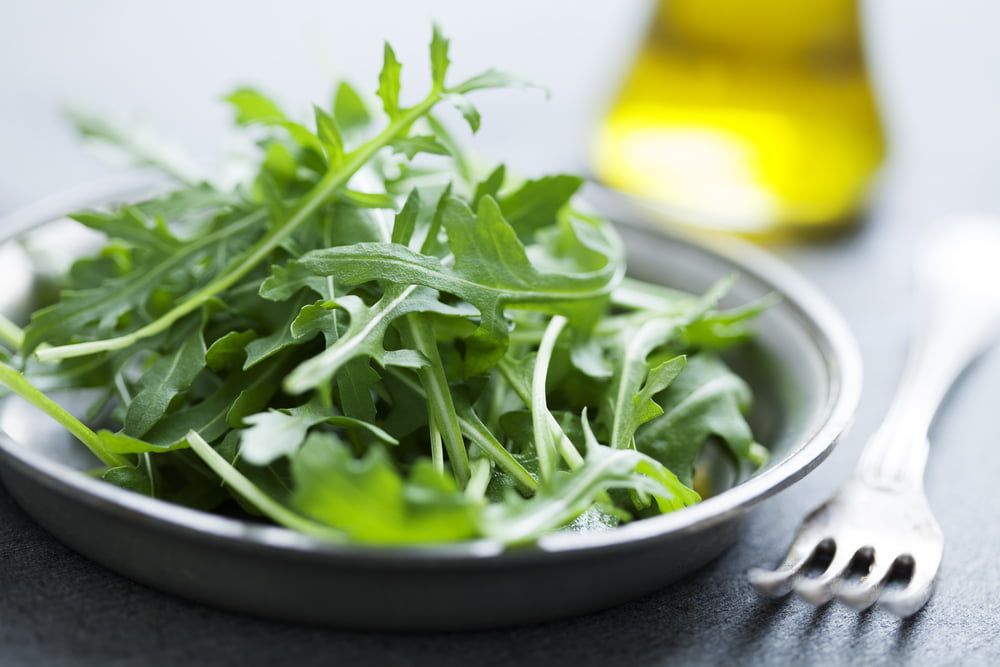 Rocket doesn’t require much preparation. Simply wash and dry the leaves and they’re ready to be used.

One of the most common ways to use rocket is in salads. It’s usually mixed in with other salad greens, but works well as the main ingredient too. However, there are only so many salads that a person can eat. If you want to get creative and use your rocket harvest in other ways, a few ideas include:

Keep in mind that tender leaves taste best when eaten fresh and raw. However, older leaves can be tougher, so processing them in some way will make them much more palatable.

There aren’t too many pests and diseases that plague rocket, which is why this plant is considered to be such an easy one to grow. However, no plant is problem-free, so keep an eye out for the following issues: 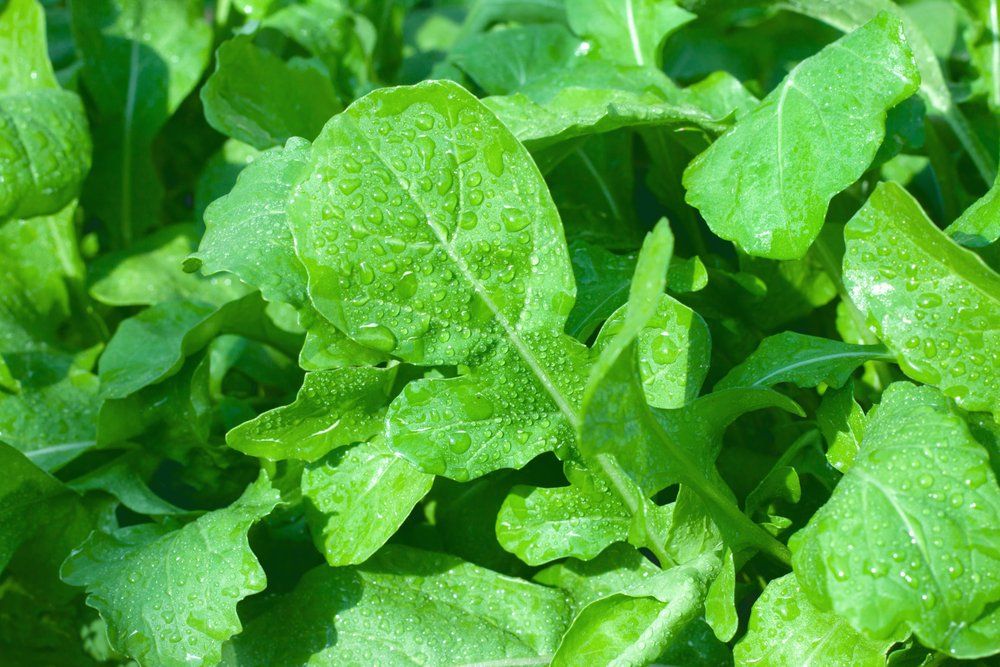 There are more than 20 different rocket varieties to choose from. They each vary slightly in flavour and appearance, but can be grown using the same methods. It’s always worth trying a few different varieties to see which ones do best in your garden. Some of the best varieties to start off with are:

Rocket is such a flavourful crop – just a few leaves are enough to transform a meal. It also happens to be packed with vitamins and other key nutrients, making it a food that’s well worth eating more of. The fact that rocket is so easy to grow is definitely a bonus – time things right and not only will you be harvesting rocket throughout the spring and summer, but you can also store your harvests to feed you well into the winter.