One of the better-rated budget tool brands, Hychika produce honest power tools for reasonable prices. This Hychika 12 Volt drill driver isn’t going to be the most powerful piece of kit on the market, but for the price you don’t just get a cordless drill. Hychika have gone the extra mile and included a small but comprehensive tool roll that I think is quite brilliant.

How I Tested The Hychika DD-12BC Cordless Drill Driver Kit

Establishing the best drill driver available right now took a lot of real-life testing. To do proper side-by-side comparison, I set up a test rig demonstrating the normal challenges facing a cordless drill. Drilling into timber, brick, and steel plate. Seeing as this drill doesn’t have a hammer function, I didn’t test it on brick though.

The other side of the test was to think about how the drill looked and felt during use. A good drill is supposed to be an extension of your arm and comfortable to use, so I kept in mind what it felt like to operate each time.

Our Verdict of The Hychika DD-12BC Cordless Drill Driver Kit

Being the only 12 Volt drill on my list, I expected the Hychika DD-12BC to fall by the wayside in terms of power and useability. I was wrong. It’s never going to replace a DeWalt drill in a professional’s toolkit, but for the average DIYer it’s a bit of a winner!

What I like about this drill driver is that Hychika have put in a little extra effort to stop this feeling like a budget bit of kit. The little tool bag isn’t going to save your drill from damage, but it’s better than nothing at all. The accessory roll is also an excellent little kit that will serve a light DIYer well.

It feels like a handy little drill. It’s not underpowered and you don’t need to wait for it to get up to speed. Its performance drilling through wood and driving home screws is amazing. It puts some of the more expensive 18 Volt cordless drills to shame! However, without a hammer mode it’s pretty useless on brick or blockwork. 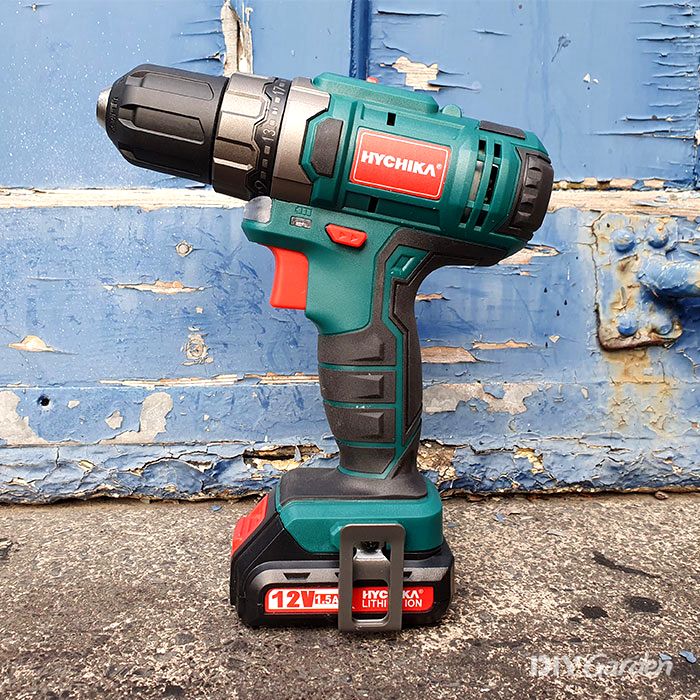 The Hychika drill driver arrived packed up in a handsome white box which is an excellent start. Well packaged up for transport, it’s a handsome green drill driver that doesn’t weigh much and is pretty compact too. Measuring just 175 mm long, it’s small enough to get into those tight spots.

I’ve got to mention the accessory kit. It elevates this small drill driver simply because of its design. I’m a huge fan of tool rolls already. They’re great at keeping bits and pieces stored safely in a small and handy way. Held together with a strip of Velcro, the accessory kit rolls up tight and looks pretty good too. You get a modest selection of spade bits, HSS bits, Chrome Vanadium driver bits, and even a small collection of sockets to get you going.

The drill driver and accessory kit come with a tool bag to keep everything organised. It’s just a cloth bag with a couple of handles, but it looks quite good. It’s not going to afford much protection against knocks and drops, but I’d rather have this bag than no case at all.

The grip shape is comfortable and there’s a set of rubberised panels that match up to where your fingers wrap around it. It’s an ideal handle, but only if you’ve got smaller hands than me. The bottom of my hand started rubbing against the battery housing immediately, which soon became annoying. It’s a shame that the handle is undersized, otherwise it might have been one of the best on my list.

The chuck, as you’d expect for this type of cordless drill, is made from plastic. It’s got a nice shape to it and doesn’t have any wobble, which is an excellent start. The issue with the chuck is that it can only take bits up to 10 mm thick. This will limit you to small drill bit sizes, but it’s not what this little tool is designed for. Behind the chuck, the torque selector ring has a surprisingly positive action. Each click feels chunky and not at all flimsy.

I was happy to see this drill driver has two gears. The selector behind the torque selector feels strong and means you’re going to get the most from the little motor. Even though this cordless drill doesn’t have hammer mode, it’s capable for a 12 Volt unit.

You get a work light on this drill, but it’s not particularly powerful. Comparing it to the monster LED on the DeWalt DCD796, it’s a bit useless. It throws out a pale white light that tries to light up the dark spots, but it seems underpowered and not good enough for the task.

There’s a green light that pings on just in front of the forward/reverse switch on the left side of the drill. Sometimes it flicks to red if you pull the trigger fast. It’s in the shape of a battery, so I assume it’s some sort of power level indicator, but I honestly don’t know what it does. 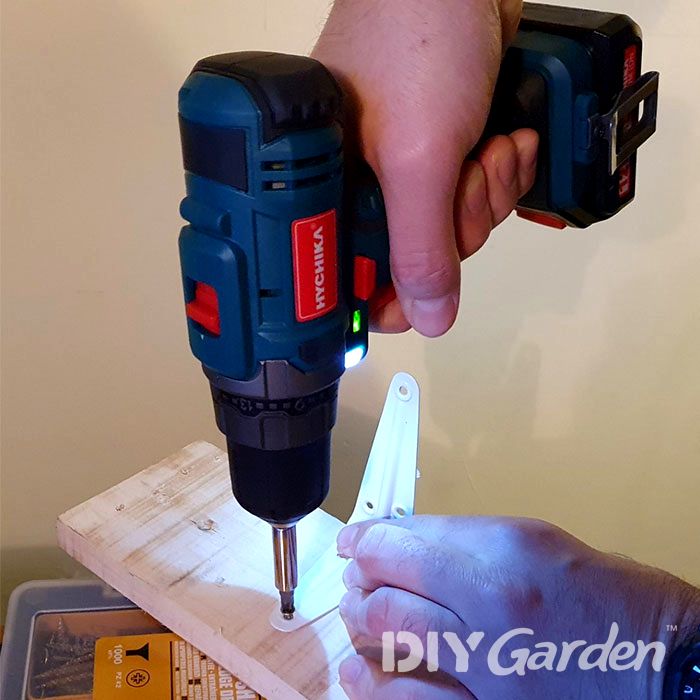 I was going to start by mentioning the lack of power that a 12 Volt system has over an 18 Volt, but I was honestly blown away by this little Hychika drill driver! Putting 30 holes into 38 mm thick CLS timber with a 5 mm wood bit was a cinch. The drilling speed was fast, taking just over a minute for all 30 holes. Thanks to the light weight of the drill, it was easy to handle but still did the hard work brilliantly. I’m pleasantly surprised.

When it came to driving screws, I was frankly gobsmacked. For a small 12 Volt drill this thing is incredibly capable. 70 mm long screws disappeared into the timber and came out without a fuss either. Even the 150 mm long wood screw drove home comfortably and confidently. This little cordless drill is a real dark horse, considering the price!

The little Hychika drill finally met its match when it came to drilling through a 3 mm thick steel plate. It made it in the end, after two minutes of drilling. The handle stopped feeling comfortable after about a minute, so I wouldn’t recommend this tool if you’ve got a lot of metal drilling to do.

As this cordless drill doesn’t feature a hammer action mode, I didn’t try it out on my house brick. 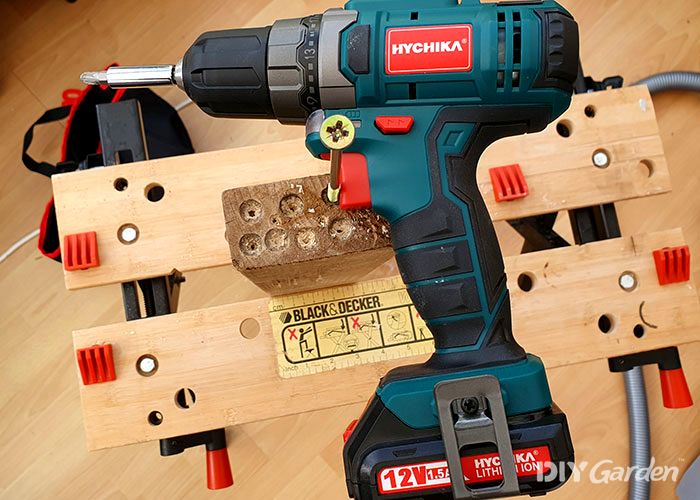 The big difference between this drill and the other cordless drills on my list is that the Hychika DD-12BC runs on a 12 Volt system. Running at a lower Voltage means a couple of things for this drill. It’s really light at just 860g because it doesn’t need to carry such a heavy battery load to work. Unfortunately, it’s not as powerful as some of the bigger cordless drills that I have tested.

Having 12 Volts instead of 18 means the stats are never going to be that great, however. You get a maximum drilling speed of 1,500 rpm, 30 Newton metres of torque, and no hammer setting for drilling into brick or blockwork. Not the highest performing drill on my list, but it’s still a good choice for home DIY jobs.

None of the literature supplied with the Hychika drill driver state the official noise power level. Using my not very scientific Sound Meter app, I recorded a maximum of 80 dB with no load. That’s roughly the same noise level as a busy restaurant, but without proper figures I can’t be sure.

The motor itself sounds capable. For a 12 Volt system, it’s not weak sounding or like it’s a toy. You still get that annoying clunk noise if the electronic brake cuts in. It’s something I’ve found on much more expensive cordless drills though, so I’m not too worried about it.

There’s not much to say about this tool’s safety features that I haven’t mentioned in the other cordless drill reviews. No drill is safe until you respect it and wear the proper level of PPE. The decent range of 21 torque settings will help you keep control of the drill, which is welcomed.

Whether it’s really a safety feature or not, I like that Hychika have included a belt hanging hook. Trying to climb up a ladder one-handed isn’t very safe after all. I think this is a safer cordless drill because you always have somewhere to hold on to it, even when your hands are full.

You need to think about what you’re getting with this kit before you can understand its value for money. It’s a seriously capable little drill driver, but what makes it a good product to own is the excellent little accessory kit. If you’re just planning to do some light work around the home, you probably won’t need to buy anything else at all.

Some of the other cordless drill kits on my list come with multiple batteries and hard cases, both of which are lacking in the Hychika, but I still like this little system. There’s nothing wrong with 12 Volt battery systems if you don’t try to overwork them. At this price, it’s a bit of a bargain really!

Being the only 12 Volt drill on my list, I expected the Hychika DD-12BC to fall by the wayside in terms of power and useability. I was wrong. It’s never going to replace a DeWalt drill in a professional’s toolkit, but for the average DIYer it’s a bit of a winner!

What I like about this drill driver is that Hychika have put in a little extra effort to stop this feeling like a budget bit of kit. The little tool bag isn’t going to save your drill from damage, but it’s better than nothing at all. The accessory roll is also an excellent little kit that will serve a light DIYer well.

It feels like a handy little drill. It’s not underpowered and you don’t need to wait for it to get up to speed. Its performance drilling through wood and driving home screws is amazing. It puts some of the more expensive 18 Volt cordless drills to shame! However, without a hammer mode it’s pretty useless on brick or blockwork. 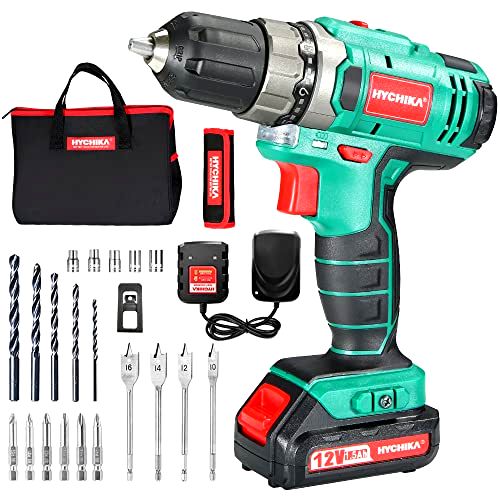